Eddy Pineiro sent a great tweet shortly after kicking the Chicago Bears to a victory over the Denver Broncos.

When the Broncos took a 14-13 lead with just 31 seconds remaining in regulation, odds were stacked against the Bears. However, a Mitchell Trubisky pass to Allen Robinson put the Bears in field goal range with just one second left on the clock. Pineiro came on to convert a 53-yard field goal to prevent the Bears from falling to 0-2 on the season.

Following the game, Pineiro, who is in his first season as the Bears’ kicker, took to social media to sum up the emotions after his big moment.

If you don’t believe in God you better start believing he’s REAL thank you chicago! https://t.co/2sMWfsYAmy

The Bears and their fans endured heartbreak last year as a result of performances by kickers. Pineiro stepping up on Sunday wasn’t lost on one of the team’s stars, Khalil Mack.

“You think about everything that happened. All the games last year that were kind of like close. Especially that playoff game & you put that pressure on that guy. Eddie P. The birthday man. He came out & nailed that mother F*cker. F*ck. That’s how you play ball man"- Khalil Mack

It looks for now like the Bears have found themselves a kicker. 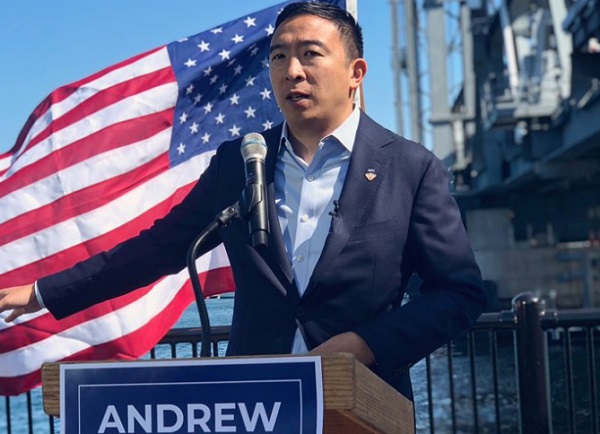 Democratic presidential candidate Andrew Yang took to social media Wednesday to question the date and time of his party’s debate this week.

On Thursday, the Carolina Panthers and Tampa Bay Buccaneers will kick off Week 2 of the NFL season on “Thursday Night Football”, beginning at 8:20 pm ET. Beginning at 8:00 pm ET, the 10 leading Democratic presidential candidates will take the stage in Texas for what is scheduled to be a three-hour debate, which will run essentially the same length as the football game.

Yang will be among the candidates participating in the debate. He used Twitter to question why the debate will overlap with the NFL game, understanding how the ratings for NFL games often dwarf all other programming on TV.

Why would you have a Democratic debate at the same time as an NFL game? Football fans vote too.

The NFL is enormously popular in the U.S., so having the debate compete with the game could be a losing battle in an effort to reach the maximum amount of viewers. However, Yang probably just scored some points among football fans.

Kevin Durant not ‘moved’ by pursuit of being basketball’s GOAT

Kevin Durant is in the conversation for best basketball player in the world. Over time, he may even have a place in debates over the greatest player of all time (aka “GOAT”). But Durant says being considered the “GOAT” isn’t what drives him.

Durant is quite active on social media and often engages in conversations with those who reach out to him. Another such instance occurred on Twitter Wednesday. The exchange began with a question that was posed to Durant, asking him whether he thought he belonged in the conversation with Michael Jordan.

Everybody gets compared to everyone and no one will ever get the GOAT title outright, especially on social media so does it really matter in the grand scheme? Or do u just wanna argue real quick?

Durant and the fan then talked about the value of championship rings on player legacies.

U wanna put together hypotheticals for every great player? I can make sure everybody has rings if we did that.

Then came the GOAT debate, and that’s when Durant said being the GOAT isn’t something that “moves” him.

Being The GOAT isn’t something that moves me.

Durant has been seen as someone who marches to the beat of his own drum. While the quest to be the best ever is a mantra that rings true with athletes across the sports world, Durant claims to not be one of those athletes.

Is that because he knows he’s already too far behind to catch up to the likes of LeBron James or Michael Jordan? Or because he knows it’s an argument you can never win? Either way, at least KD is using social media in a much more positive way now. The Texas Longhorns seem to think some of the trips made by trainers to the field during their game against LSU may not have been for legitimate injuries, and a nugget shared by a reporter suggests that.

LSU beat Texas 45-38 on Saturday evening in what was the second game of the season for both teams. Among the talking points after the game was the notion that LSU players faked injuries during the second half to slow down Texas’ offense. In a Yahoo! Sports article, Pete Thamel says Tigers linebacker K’Lavon Chaisson winked at the Texas coaching staff before going to the ground with an apparent injury.

Thamel spent a week with Texas football for his story, so it’s pretty clear he’s getting Texas’ side of things, and the implication is Texas believed Chaisson was faking. However, the Longhorns’ belief that Chaisson was faking may be unfounded.

LSU head coach Ed Orgeron said Monday that a few of his players are out this week and that Chaisson is in a walking boot.

#LSU Coach O says Rashard Lawrence and Glen Logan are both out this week, K'Lavon Chaisson is in a boot. pic.twitter.com/JecRp8C3dX

Chaisson has some history with Texas. He threw shade at Sam Ehlinger entering the game and then drank the Longhorns’ water before the game.

Whether the injury was gamesmanship or legitimate, this will be a storyline that will likely surface prior to next season’s rematch between the teams, not to mention the air conditioning debate. The New York Yankees have added more to fuel to what is already one of the biggest rivalries in North American sports.

With a 5-0 victory over the Red Sox on Monday, the Yankees eliminated the Red Sox from contention for the American League East division title race. Following the game, the Yankees blasted Frank Sinatra’s “New York, New York” inside the visitor’s clubhouse at Fenway Park.

The Yankees are blasting Sinatra’s “New York, New York” in the visiting clubhouse at Fenway.

This marks another addition to a history of trolling between the two franchises. New York played the same song last year after winning Game 2 of the ALDS in Boston. Then Boston played “New York, New York” after clinching the series at Yankee Stadium.

The Red Sox didn’t stop there. They again played “New York, New York” in the clubhouse after beating the Los Angeles Dodgers in Game 5 of the World Series to win the championship.

If there’s one thing the Yankees and Red Sox enjoy it’s sticking it to the other franchise whenever the opportunity presents itself. With New York cruising towards the postseason, Boston’s hopes of making it rest on the wild card game. They are currently eight games back of the second wild card spot with 18 games remaining. Should the Red Sox be eliminated from contention there as well, there will surely be more joy in the Yankees clubhouse, wherever they happen to be at the time.

Baker Mayfield underwent X-rays on his right arm following the Cleveland Browns’ season opening loss to the Tennessee Titans and had his hand in a wrap.

During Sunday’s game, Mayfield was was hit by Cameron Wake in the end zone, resulting in a safety for the Titans.

Later in the game, Rotoworld’s Patrick Daugherty made the observation that something didn’t look right with Mayfield’s arm.

Daugherty looks to have been correct because Mayfield was seen headed for the X-ray room after the game.

Baker Mayfield just entered X-ray room. Was keeping his right arm to side during postgame interviews.#Browns

We will likely receive an update from the Browns in the coming days. For now, speculation will likely stem from a wrap that was on Mayfield’s throwing hand as he left the stadium.

Baker Mayfield leaving with a soft wrap on his throwing hand pic.twitter.com/5MMMEZb0h2

Mayfield was 25/38 for 285 yards, one touchdown and three interceptions in the Browns’ 43-13 loss. The game was disappointing both for Mayfield and Cleveland after an offseason of hype.