END_OF_DOCUMENT_TOKEN_TO_BE_REPLACED

Adrian Peterson sent to hospital after allergic reaction to seafood 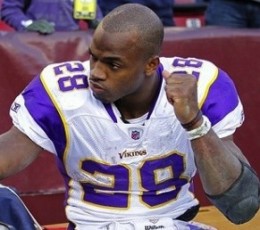 Adrian Peterson‘s far-from-boring offseason continued when he was rushed to the hospital on Monday with an allergic reaction to seafood. Peterson is fine now but it was indeed a scary moment for him and the team when the running back’s face swelled and breathing worsened after a team lunch at Vikings training camp.

“Like 20 minutes after I ate, I went to lay down and felt my throat itching and my ears itching and all of a sudden my face swelled up,” Peterson said, according to NFL.com. “I couldn’t breathe out of my nose.”

After receiving treatment at a hospital in Mankato, Minn., Peterson has been cleared to resume rehabbing his surgically reconstructed knee.

“He’s doing fine,” Vikings coach Leslie Frazier told the Pioneer Press. “He’ll pick back up with his rehab (Tuesday). He’s been cleared. Everything’s back to normal now. Bit of a scare but he’s fine now.

“He had mentioned there was a time early in his life where he had an allergic reaction to something, maybe not quite as severe as this.”

As Shutdown Corner points out, allergies to seafood for some people can flare up for the first time in adulthood. So perhaps Peterson didn’t know what was in store for him when he chowed down on some jambalaya. Although, if you’re eating jambalaya, you’re probably asking for trouble in one form or another. When we last saw Mike D’Antoni, he was resigning as the Knicks coach, seemingly as the fall guy in an alleged contentious relationship with his star player Carmelo Anthony. That was in March.

Now, after moping around in his PJ’s, D’Antoni is an assistant on Mike Krzyzewski’s coaching staff for Team USA. A team that, oh by the way, Anthony is also a member of. Awkward? One would certainly assume so.

Even Anthony acknowledged that things between the two could have been weird. He and D’Antoni hadn’t spoken since the resignation until U.S. basketball convened for camp in Las Vegas earlier this month. That’s when they found themselves in a situation that forced them to break the ice.

END_OF_DOCUMENT_TOKEN_TO_BE_REPLACED Vikings rookie cornerback Josh Robinson has yet to play a single down in the league, but he’s wasted no time buying into the team’s bitter NFC North rivalry with the Packers.

On Sunday, the third-round pick tweeted the above photo of a note he left on a Packers fan’s truck leaving church earlier in the day. The note reads, “I’m sure this is a Packers fan and I hate the Packers!!! SKOL Vikings!” Credit to Robinson for taking the initiative to stick it to the detestable Packers so soon in his career.

It’s unclear where this all took place. The last place Robinson tweeted about being in was Mankato, Minn., where the team is holding camp. Assuming that’s where this happened, that Packers fan has some stones for supporting his team in enemy territory. Brett Favre obviously knows both sides of that. During the Stanley Cup playoffs this year, it became apparent the L.A. Kings’ official Twitter account was a social media incarnation of Don Rickles. As the Kings made their run all the way to winning the Cup, their Twitter feed was a nonstop stream of snarky and funny tweets. The guy in change of running the account was on point just as much as the team he works for was on the ice.

Apparently @LAKings hasn’t lost a step since the season ended. But in an exchange with the UFC’s official Twitter, the snark may have been taken a little too far:

END_OF_DOCUMENT_TOKEN_TO_BE_REPLACED It’s no secret that Michael Phelps and Ryan Lochte are huge rivals. Phelps is coming off the greatest individual Olympic performance in history four years ago but, after finishing off the podium on Saturday, has clearly lost a step. Lochte, meanwhile, is arguably the best swimmer in the world today and is poised for a monster Games in London.

These are two alpha dogs who probably see the other as infringing on his territory. But at the same time they’re countrymen who should have each other’s support. And we saw just that on Twitter after Lochte came away with the gold after their first showdown on Saturday:

END_OF_DOCUMENT_TOKEN_TO_BE_REPLACED There are good ways to start your NFL career, and there are bad ways. Rams rookie cornerback Trumaine Johnson knows about the bad ways.

The third-round draft pick reached a contract agreement with the team on Tuesday, which made him eligible to join the team at training camp on Wednesday. But Johnson couldn’t make it in time for his first official practice because of a regrettable turn of events in his hometown of Stockton, Calif.

“I set my alarm clock,” Johnson said, according to the St. Louis Post-Dispatch. “I didn’t hear it. I missed my flight. I messed up.”

Chalk it up as a rookie mistake. The good news is Johnson won’t be fined by coach Jeff Fisher for his tardiness. Rams rookie camp is all that’s taking place right now, and missing one day of that isn’t as bad as missing a day of full-squad practice, which starts on Sunday. But still, you have to think Johnson regrets things starting off like this. Let’s just hope he used the extra time wisely and remembered to bring a TV.