The Los Angeles Dodgers logo on the outside of Dodger Stadium on July 15, 2018. Photo Credit: Larry Brown/Larry Brown Sports

It did not take long for one former MLB manager to land back on his feet after getting fired several months ago.

Jack Harris of the LA Times reports Friday that the Los Angeles Dodgers have hired Chris Woodward to be a special assistant in their front office. Woodward had been the manager of the Texas Rangers for the past four years before being let go in August (with Texas ultimately hiring Bruce Bochy as his successor).

The 46-year-old Woodward was not particularly apt as a manager. He went just 211-287 (.424) with zero playoff appearances in Texas. But Woodward should be a good fit for the Dodgers, whom he already worked for as their third base coach from 2016 to 2018 before moving to the Rangers.

Harris notes that Woodward will do roving instructional work throughout the Dodgers organization as part of his duties. Woodward may also be looking forward to getting even with an old adversary in the NL West. The Miami Marlins are making a significant change to the duties of standout young player Jazz Chisholm following their significant trade Friday.

Marlins general manager Kim Ng revealed that Chisholm will move to center field to accommodate newly-acquired infielder Luis Arraez. Chisholm has no experience in the outfield, having previously played shortstop and second base.

The Miami Marlins are moving Jazz Chisholm to center field, GM Kim Ng says. Chisholm has played exclusively as a second baseman and shortstop during his big league career. Luiz Arráez will take over as the full-time second baseman, with Jean Segura manning third.

This is a surprise to say the least given Chisholm’s lack of experience at the position. The expectation had been that Chisholm would play shortstop, with Arraez at second and newly-acquired Jean Segura at third. Now it appears that Joey Wendle will play shortstop instead, with the Marlins using Chisholm to fill their center field vacancy.

The San Diego Padres appear to be doing something similar with shortstop-turned-outfielder Fernando Tatis Jr., but the circumstances there are quite different. Ultimately, Chisholm seems to just want to play, so this is the best route toward doing that, at least in the Marlins’ eyes. The Twins are trading Arraez to the Miami Marlins, according to multiple reports. The Twins will receive starting pitcher Pablo Lopez and prospects, including highly-rated infield prospect Jose Salas.

Infielder Jose Salas and one other prospect are heading to Minnesota along with Pablo López, source tells @TheAthletic. Salas, 19, is the Marlins’ No. 5 prospect, per @MLBPipeline. First on his inclusion: @CraigMish

Arraez is the reigning AL batting champion and is renowned for his bat-to-ball skills, as he struck out just 43 times in 603 plate appearances while hitting .316 in 2022. He was slightly more expendable for the Twins after they brought back Carlos Correa as a free agent.

They get a solid rotation upgrade in Lopez, who has put up good numbers for the Marlins over the past few seasons. He went 10-10 with a 3.75 ERA for Miami last season, and the Twins will have him under team control for two more seasons before he becomes a free agent.

The Twins are eager to contend now that Correa has returned to remain the centerpiece of the organization. Parting ways with Arraez is not easy, but they got a solid starter out of it and should be a more well-rounded team as a result. The Seattle Mariners have successfully recruited a player who used to give them headaches in divisional play.

Seattle announced Thursday that they have signed veteran infielder Tommy La Stella to a one-year contract. La Stella is getting a Major League deal.

The 33-year-old La Stella made an All-Star team with the AL West rival Los Angeles Angels in 2019 before he was traded to another team in the division, the Oakland Athletics, in 2020. He was also part of the Chicago Cubs’ World Series team in 2016. La Stella was recently designated for assignment by the San Francisco Giants after hitting .239 with a career-worst .632 OPS in 60 appearances for them last season.

After finally snapping their playoff drought last season with a 90-win effort, the Mariners have done little in free agency besides signing former All-Star and Gold Glove outfielder AJ Pollock and now La Stella. They did, however, pull off a noteworthy trade with another AL team.

Aroldis Chapman will try to revive his career as a reclamation project in the American League.

Chapman has agreed to terms with the Kansas City Royals, according to Mark Feinsand of MLB.com. Chapman will receive a base salary of $3.75 million, not counting potential incentives.

Chapman gets one year at $3.75 million plus performance bonuses from the Royals, per source.

The Royals were one of three teams linked to Chapman recently, so the deal does not come as a major surprise. The Cuban reliever turns 35 next month and will likely be trying to re-establish himself as a high-end reliever, possibly with a view toward being trade bait for a contender later in the season.

Chapman is coming off a poor final season with the New York Yankees. His 4.46 ERA was a career worst, and he essentially left the team with no choice but to leave him off the playoff roster thanks to both his performance and his conduct. The Royals will take the risk and see if there is anything left in the tank now. The Los Angeles Angels may be continuing their shopping spree.

MLB insider Hector Gomez reported on Wednesday that the Angels are showing a lot of interest in veteran catcher Gary Sanchez. The 30-year-old Sanchez remains an unsigned free agent after spending last season with the Minnesota Twins.

Sanchez began his career with the New York Yankees in 2015 and was a two-time All-Star as well as a Silver Slugger Award winner over his seven seasons in the Bronx. But Sanchez eventually fell out of favor due to his low average, high strikeout numbers, and shaky defensive play. Sanchez’s various lapses made him a target of criticism among Yankees fans as well.

While Sanchez hit just .205 for the Twins last season, he was their everyday catcher, produced 16 home runs and 61 RBIs, was a net positive defensively (according to defensive runs saved) for the first time in years.

The Angels conceivably have enough at the catcher position to enter 2023 with confidence. Max Stassi is a rock-solid defender, and exciting 22-year-old catching prospect Logan O’Hoppe was acquired from the Philadelphia Phillies at last year’s trade deadline (with Matt Thaiss also lurking as depth).

But Sanchez is more proven and has a more potent bat than any of those guys. He would also fit in with the Angels’ offseason strategy of stockpiling depth (a departure from their previous approach of swinging for the fences with one or two huge-money signings). Among the players that the Angels have already acquired this winter are righty power hitters Brandon Drury and Hunter Renfroe, All-Star pitcher Tyler Anderson, fireballing reliever Carlos Estevez, and outfield glove Brett Phillips. Additionally, they added another former Yankee who was teammates with Sanchez.

Aroldis Chapman is drawing a fair amount of interest as the former All-Star attempts to revive his career.

The Miami Marlins, Kansas City Royals, and San Diego Padres are all showing interest in Chapman, according to Mark Feinsand of MLB.com.

The Marlins, Royals and Padres are among the teams interested in Aroldis Chapman, per sources.

This is probably a solid indicator of where Chapman’s value is at right now. The Marlins and Royals in particular are rebuilding teams that will likely be offering short-term, incentive-laden contracts to see if Chapman can find some of the old magic. He certainly will not be in line to close or pitch high-leverage innings for a contender, at least at the start of the season.

Chapman turns 35 at the end of February. He is coming off his worst MLB season, having posted a 4.46 ERA for the New York Yankees. His time with the franchise ended on a bad note, which may also make some other teams wary.

Aroldis Chapman could get chance with 1 NL team?

Even after his Yankees tenure went up in smoke last year, Aroldis Chapman could still be getting another shot.

Jon Heyman of the New York Post reported on Tuesday that the Miami Marlins are considering the possibility of signing the veteran reliever Chapman. Heyman notes that Chapman lives in South Florida.

Though he is a seven-time MLB All-Star, Chapman comes with plenty of risk these days. He will turn 35 next month and posted a career-worst 4.46 ERA with the Yankees last season, costing him their closer role. Following his demotion, Chapman made negative headlines by missing a mandatory workout and being left off the Yankees’ playoff roster as punishment.

But none of that may deter the Marlins, who are bringing in veteran talent this offseason after going 69-93 in 2022. Earlier this winter, they already signed infielder Jean Segura and starting pitcher Johnny Cueto. Miami’s newly-hired manager is also an ex-teammate of Chapman’s in Cincinnati. The Mayor’s term is officially over.

To the game of baseball, Thank you! 💙 pic.twitter.com/M2aBpppx9G

Shaw began his career with the Boston Red Sox in 2015 and became a fan favorite with his power pedigree for a lefty-hitting infielder. He clubbed 29 home runs and 107 RBIs over his first two seasons with Boston, becoming their everyday third baseman and earning the funny nickname “The Mayor of Ding Dong City” (coined by Boston sports personality Jared Carrabis).

After a subsequent stint with the Toronto Blue Jays, Shaw returned to the Red Sox in 2021, joining them in time for their ALCS run. He would then re-sign with Boston for the 2022 campaign but had an awful year, going hitless in 19 at-bats before being designated for assignment by the Sox in late April.

Boston is in a much better position at third base these days, and now Shaw has decided to call it quits just a few months shy of his 33rd birthday. 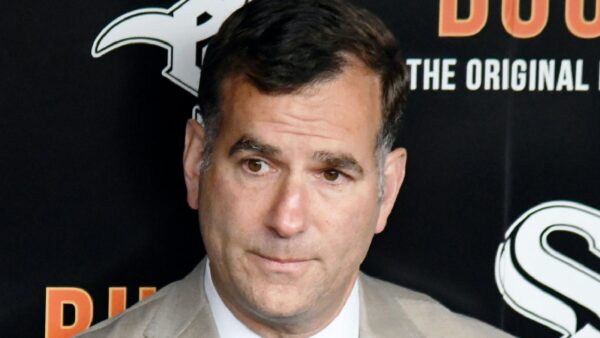 The Chicago White Sox are kicking it back to the era of their last World Series title.

MLB insider Hector Gomez reported this week that the White Sox have signed Juan Uribe Jr., the son of former White Sox player Juan Uribe, for a $200,000 signing bonus as part of International Signing Day. Gomez also shared pictures of Uribe Jr. with his parents as he signed the contract.

Uribe Jr., meanwhile, is a shortstop just like his father was. He is still only 16 years old but now becomes the latest son of a well-known 2000s MLB player to sign with a big-league team.