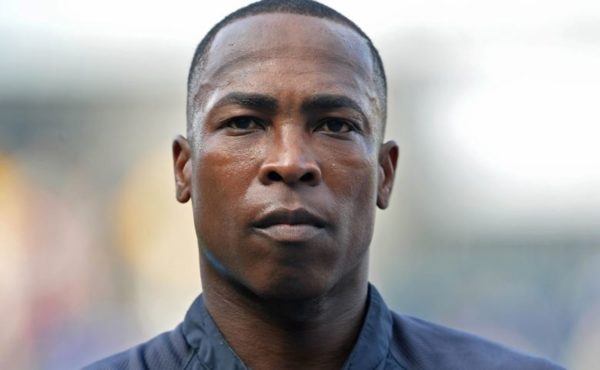 Alfonso Soriano is looking like he could still hit 40 home runs right now.

The former MLB star posed for a picture with his wife this week in a post to his Instagram page.

The post led to some incredulous reactions on social media as to how completely jacked Soriano was looking in it.

I thought that was a young Tyson https://t.co/Qqx8JhNdrq

This is crazier than Barry Bonds’ before and after https://t.co/qkQIrX4OZy

Soriano, now 45 years of age, was a seven-time MLB All-Star and won four Silver Slugger Awards. He is also one of only four players ever to make the 40-40 club (40 home runs and 40 stolen bases in a single season). Soriano did so in the 2006 season, and no player has achieved that feat ever since.

Though he has not played in the league since 2014, it is good to see that Soriano is keeping himself in shape … and then some. He was known for using a large bat during his playing career, but that very same bat would probably look tiny compared to Soriano these days.

The Washington Nationals are being sued by two former employees who were fired for refusing to comply with the team’s COVID-19 vaccine mandate.

Lawrence (Larry) Pardo and Brad Holman were pitching coaches in the Nats’ organization. The two refused to get the COVID-19 vaccine for religious reasons and were fired by the Nats as a result. The team instituted a mandate on Aug. 12 that went into effect on Sept. 10, leading to the firing of both men.

Now the two have filed a lawsuit against the club, TMZ Sports reports.

They believe they were discriminated against on the basis of religion and are due damages.

As of September, the two also were filing a complaint with the Equal Opportunity Employment Commission.

In a statement sent to the Washington Post this morning, Brad Holman and Larry Pardo said they refuse to take the vaccine because "they are developed from and/or tested with aborted fetal cells." They filed a religious exemption with the Nationals that was denied.

Holman, 53, and Pardo, 55, were both hired by the team in 2018. Holman was the team’s minor league pitching coordinator, while Pardo was the pitching coach for the club’s Florida Complex League team, according to The Washington Post. If Carlos Correa was hoping to get a rise out of Derek Jeter with his recent comments about The Captain, he appears to have failed.

The All-Star shortstop Correa made some remarks during a recent interview questioning whether Jeter deserved the five Gold Glove Awards that he won during his career. The interview, conducted by former MLB player Carlos Baerga, was in Spanish.

Jeter, now the CEO and part-owner of the Miami Marlins, reacted to Correa’s comments this week.

Correa is coming off the first Gold Glove victory of his career. As for Jeter, a popular criticism of him has been that he won Gold Gloves based more on reputation than on his actual defensive ability. That may have even been a consideration for the voter who left Jeter off his Hall of Fame ballot entirely.

There is also another reason why Correa’s comments got so much attention, and that is because of a team that Correa has been linked to in free agency. For Jeter’s part though, he seems to be totally unbothered about it all.

Justin Verlander opted to re-sign with the Houston Astros fairly quickly after becoming a free agent. That does not mean he did not have intriguing options elsewhere.

According to Jon Heyman of MLB Network, Verlander turned down a one-year, $25 million offer from the New York Yankees in order to return to Houston.

Yankees offered Verlander $25M 1-year deal. Solid offer but weren’t going to beat the $50M 2-year deal with opt out he got from Astros

The Yankees certainly made a competitive offer. In fact, it’s financially identical to what Verlander ended up getting. The difference is that the Astros were willing to tack on a second-year player option, essentially guaranteeing Verlander a two-year deal with an opt-out.

After being turned down by Verlander, the Yankees remain in the market for veteran starting pitching. With another top starter apparently unwilling to consider them, they might have to expand their search to find what they are looking for.

Noah Syndergaard is revealing the jersey number that he will wear for the Los Angeles Angels next season, and it is sparking a sensitive subject.

Syndergaard appeared Friday on Angels Radio AM830’s “The Sports Lodge” and said that he will be wearing No. 34 for the team. While that is the jersey number that Syndergaard has worn for his entire career, it is also the number that belonged to former Angels pitcher Nick Adenhart.

In 2009, Adenhart and friends Courtney Stewart and Henry Pearson were killed by a drunk driver in Fullerton, Calif. Adenhart was just 22 years old. While the No. 34 jersey was never officially retired by the team, no Angels player has worn it since then.

Syndergaard added during his appearance on “The Sports Lodge” that he is hoping to honor Adenhart by wearing the number.

“I just want to honor his name and wear that jersey with pride,” Syndergaard said of Adenhart.

The reaction of Angels fans to the news was definitely a mixed bag. Some approved of Syndergaard using it as a way to pay tribute to Adenhart while others were more conflicted.

Zero problem with this. #34 can be both a reminder of loss and an opportunity for success.

I liked that too. Means a lot that he wants to honor the legacy.

Going to be tough seeing 34 out there again, but I hope Thor wears it with pride and honor. https://t.co/yGSz2EoXvS

Not really sure what I think about this. I definitely don't love it. https://t.co/gv3aMDOgjf

I respect that if he is truly wanting to honor him. Hopefully he backs it up with strong performances to earn it #LAAngels https://t.co/br9Y2nLbZ3

On one hand, Syndergaard was already wearing the No. 34 jersey elsewhere and is only on a one-year contract with the Angels. But on the other hand, he seems to appreciate the significance of the number in Anaheim and have a genuine desire to honor Adenhart. It is definitely a delicate subject with no one right answer. But regardless, Adenhart will always remain close in the hearts of all those in the Angels organization.

Carlos Correa may lose interest from 1 team for key reason

There appears to be plenty of interest in free agent shortstop Carlos Correa, but another team may be hesitant to pursue him for one major reason.

Correa is expected to seek upwards of $300 million in free agency, and that price tag is proving to be a bit much for some teams. That includes the Detroit Tigers, according to MLB Network’s Jon Heyman. The Tigers “love” Correa but are reluctant to offer that sort of contract due to their array of needs.

Tigers do love Carlos Correa but have heard from Tigers people who insist they will not spend $300M on any one player due to multiple needs. They are considering Javier Baez and Marcus Semien (and possibly Trevor Story though that’s unconfirmed), who won’t command that figure.

The Tigers would make for a good fit for Correa. They need a shortstop and are managed by former Astros skipper A.J. Hinch, and that connection has already fueled rumors. However, if Correa’s price tag remains high, the Tigers may just look elsewhere.

Correa should be popular even if the Tigers are reluctant to pursue him at his current price. However, it may concern him that some other teams appear to have the same issue.

Noah Syndergaard’s departure from the New York Mets is not proving to be an amicable one.

Syndergaard was the subject of some discussion in New York after his decision to sign a one-year contract with the Los Angeles Angels. Syndergaard was once viewed as a long-term ace for the Mets, but has hardly played since 2019 after undergoing Tommy John surgery.

That sentiment was echoed by iconic New York radio host Mike Francesa, who tweeted Friday that the Mets are “better off” without Syndergaard and haven’t had him for years. Syndergaard took notice of that comment and fired back with a burn of his own.

In Syndergaard’s defense, it’s not entirely his fault his Mets career went the way it did. When he was fully healthy, he was outstanding. Unfortunately, that just didn’t happen often enough. He was a non-factor in 2020 and 2021, and missed most of the 2017 season as well.

Francesa has a point too. Given that injury history, there would have been no point to the Mets leaning on Syndergaard, and it certainly sounds like the Mets felt that way. Still, Francesa makes himself an easy target sometimes, and the former Mets pitcher is happy to get his shots in.