Anthony Rizzo spent 49 games with the New York Yankees this season, and apparently he would like to return to them.

The Newark Star-Ledger’s Bob Klapisch reported on Monday that a family member says Rizzo is “quite eager” to stay with the Yankees.

According to a family member, Anthony Rizzo is quite eager to return to #Yankees in 2022. That’s an important first step, assuming NYY want him back. Have to assume they do.

That is a good sign for the team, but that does not mean Rizzo will be back with the Yankees next season.

The Cubs traded Rizzo in part because they were unable to come to an agreement with him on a contract extension. There was said to be a gap between the parties.

If Rizzo is not happy with the contract terms the Yankees offer him, should they even extend him an offer, then he could depart and explore free agency.

Rizzo is 32 and batted .248 with a .783 OPS this season. The Cubs likely saw an age-related decline from Rizzo approaching. The Yankees may see it too, which could impact a contract offer for him. 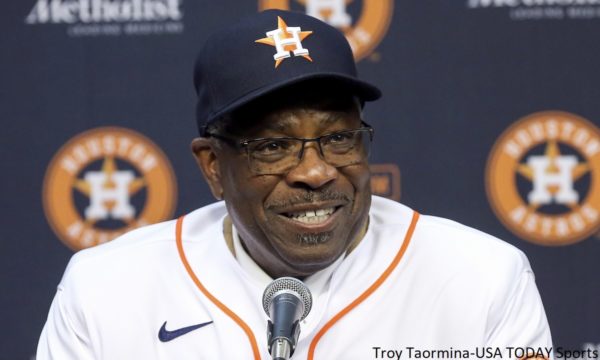 19 years after making his first World Series appearance as a manager, Dusty Baker is back, and he is planning for the occasion accordingly.

The Houston Astros manager told reporters on the eve of Game 1 that he listened to Tupac Shakur and Slim Thug that morning, per Chandler Rome of the Houston Chronicle.

It is definitely a funny way for the 72-year-old Baker to pump himself up for the World Series. Did he go for the chill vibes of “Picture Me Rollin'”? Was he embracing the Astros’ role as the villain by listening to “Me Against The World”? Or did Baker simply start blaring “Hit ‘Em Up” while visualizing the opposing Atlanta Braves? These are the real questions that we have heading into the series.

Of course, the veteran skipper Baker has always been a man of the culture. After all, he is the proud owner of one of the flat-out coolest stories ever.

To quote a recent GEICO ad, if you cover New York sports, you criticize. It’s what you do. But one New York Yankees slugger thinks that the criticism has gotten a little out of hand.

Yankees outfielder Joey Gallo responded this week to a recent article by Bob Klapisch of NJ.com. Klapisch noted Gallo’s ritual of laying his uniform out piece by piece before dressing then undressing if the fit was not right. The article then noted Gallo’s poor performance with the Yankees last season and questioned his fit in the New York market.

Gallo fired back in a tweet, writing, “Me: Literally gets dressed. Media: Yup that’s why he sucks.”

Me: Literally gets dressed.

It was definitely a pretty odd criticism of Gallo, as many MLB players have much weirder pre-game superstitions. But the former All-Star hit just .160 for the Yankees this year, so every little thing he does will be scrutinized.

Of course, the New York-area media is notoriously tough, so much so that the Yankees have even given their players media training in the past. The best way for Gallo to get them to shut up will be to absolutely rake during his first full season with the Yankees in 2022. As many MLB clubs look to go younger at the skipper position, the San Diego Padres may instead be going with a blast from the past.

Dennis Lin of The Athletic reported this week that some industry sources believe former Los Angeles Angels manager Mike Scioscia will emerge as a candidate for the Padres job. Lin adds that Scioscia was on the team’s initial contact list in 2019 but did not ultimately receive serious consideration.

The 62-year-old Scioscia comes with a decorated resume. He managed the Angels for 19 seasons, winning two Manager of the Year awards and leading the team to a World Series title in 2002. Scioscia also managed Team USA in the Tokyo Olympics this past summer, guiding them to the silver medal. But Scioscia fell out of favor towards the end of his tenure with the Angels and did not exactly seem to pass the vibe check with his young players.

The Padres just fired 40-year-old Jayce Tingler after their losing season in 2021. Between Scioscia and some of the other candidates they are eyeing, it sounds like they are placing a premium on experience this time around. The Los Angeles Dodgers had their season come to an end on Saturday night with a loss in Game 6 of the NLCS, but Walker Buehler is not hanging his head over it.

Buehler shared a positive message on Twitter after the Dodgers’ 4-2 loss to the Atlanta Braves. The right-hander said the team “did what we could.”

Buehler took the loss for the Dodgers on Saturday. He allowed seven hits and four earned runs in four innings. He gave up 10 earned runs in 18 1/3 innings during the postseason after going 16-4 with a 2.47 ERA during the regular season.

A lot of fans will say the Dodgers’ season was a disappointment, but Buehler obviously does not feel that way. Manager Dave Roberts also said he is proud of the way his team overcame adversity, and we think we have an idea of what he was talking about.

Dave Roberts made a cryptic comment in his postgame press conference after his Los Angeles Dodgers were eliminated from the postseason on Saturday night.

The Dodgers’ season came to an end with a 4-2 loss in Game 6 of the NLCS in Atlanta. The Dodgers had the second-best record in MLB during the regular season. They finished behind the Giants, who won the NL West, but beat them in the NLDS.

Roberts reflected upon the Dodgers’ season in his postgame press conference. He told the media that his message to his team was that they accomplished a lot and should be proud of the season they had.

Roberts also cryptically discussed some adversity the team went through and handled quietly.

“I think my message to our guys, it was basically … it was a tremendous season, it was a heck of a year. Going through a lot of different things that we went through that no one talked about. No one needed to talk about. And didn’t let it affect our performance. That’s something that I was proud of,” Roberts said.

TBS’ Pedro Martinez made note of the comment afterwards and wondered what it was about.

Roberts kept it to himself, but we may have an idea. It doesn’t take much to think that he might have been talking about the Trevor Bauer situation. The Dodgers lost one of their top pitchers for half the season due to a serious legal matter. The team’s players kept silent and did not comment on the situation. They also didn’t let the matter affect their play.

Even to this day, Roberts tried to avoid the subject.

Maybe that’s what Roberts was talking about, maybe it wasn’t, but it sure seems to fit. Eddie Rosario was the hero for the Atlanta Braves in their clinching Game 6 against the Los Angeles Dodgers in the NLCS on Saturday night. But relief pitcher Tyler Matzek was not far behind.

Matzek put together the outing of his career in Game 6. The 31-year-old southpaw entered the game during a jam in the seventh and could not have fared any better.

Matzek’s Braves were leading 4-2 after Luke Jackson allowed a double, walk and run-scoring double to begin the seventh. Matzek entered with runners on second and third, nobody out, and the go-ahead run at the plate.

Matzek wasn’t fazed. He mowed down the Dodgers in order, striking out Albert Pujols, Steven Souza Jr. and Mookie Betts to end the inning.

As if that weren’t enough, Matzek returned for the eighth and went 1-2-3. He struck out Corey Seager and got Trea Turner and Will Smith to groundout.

Just how dominant was Matzek? He needed just 17 pitches to retire six batters, and he threw 15 strikes.

Tyler Matzek was so stoked to be able to pitch another inning, he roared out of the dugout so fast, he beat the infielders onto the field.

The Dodgers had one shot to rally and come back. Matzek shut them down to ensure his team would clinch a World Series berth. What an outing. Eddie Rosario is carrying the Atlanta Braves this postseason, and he delivered yet another big blow in the NLCS.

Rosario took Los Angeles Dodgers starter Walker Buehler deep for a tie-breaking 3-run home run in the bottom of the fourth inning of NLCS Game 6 in Atlanta on Saturday night. Rosario had runners on second and third with two outs and a 1-2 count against Buehler. Rosario took a pitch low and in and lined it down the right field line out of Truist Park.

Eddie Rosario has tied the record for most hits (14) in a single #postseason series.

The hit was Rosario’s 14th of the NLCS, which is a Braves record for a single postseason series.

Those watching the game were in awe of Rosario and tweeted their reactions:

EDDIE ROSARIO IS THE NEW MAYOR OF ATLANTA

Eddie Rosario will never buy another meal or beverage in Atlanta.

Eddie Rosario is king of Atlanta

The man has deserved it.

It’s hard to believe that a player acquired while injured at the trade deadline, for Pablo Sandoval, has become the Braves’ postseason hero, but that is the case with Rosario.

Los Angeles Dodgers manager Dave Roberts is having to try to come back in the NLCS without a healthy Max Scherzer. In retrospect, he’s confident the difficult spot he’s in was preventable.

Roberts said Saturday that the decision to use Scherzer to close out the NLDS against San Francisco has contributed to the muscle soreness the pitcher is battling. Roberts admitted that he didn’t think having Scherzer pick up that inning would lead to any long-term issues like this.

Roberts said the cost of using Scherzer in relief for 13 pitches in Game 5 has exceeded his expectations. Said he had to trust the player who felt it would be ok. “Could I have foreseen where we are now? No. But you still have to make the decision to get to this point.”

Roberts doesn’t really sound like he regrets his decision. Obviously, Scherzer was going to want to pitch. Roberts would have vetoed it if he really thought it would cause serious problems.

Scherzer has said his current issue isn’t a “true injury” and he is preparing to start a potential Game 7. The Dodgers just have to get there first.