Chris Paul ejected from Game 1 after picking up second technical The second round playoff series between the Golden State Warriors and Houston Rockets looks like it is going to be as good as advertised, and frustrations boiled over for Chris Paul in Game 1 to the point where he was ejected.

With the Rockets trailing 103-100 and looking to tie the game in the final seconds, James Harden missed a three-point attempt and drew some contact from Draymond Green. No foul was called, and players and coaches on the Houston side were livid. Paul got the rebound and felt he was then fouled by Stephen Curry, but the officials ruled that it was Golden State ball after going out of bounds.

Here’s a video of the entire sequence, which ended with Paul picking up his second technical of the half and getting tossed.

Paul picked up his first technical foul at the end of the third quarter, when he believed he was also fouled while shooting a three.

You could make the case that Harden was fouled by Green, but the refs allowed contact on similar shots throughout the game. Here’s another example where it looked like Harden may have been fouled by Klay Thompson:

The Rockets obviously believed the Warriors benefitted more from non-calls, but they need to do a better job of keeping their emotions in check going forward. Considering Paul managed to get T’ed up from the bench earlier this season, we shouldn’t be all that surprised he got ejected.

Tempers flared for the Houston Rockets late in the third quarter of their game against the Golden State Warriors on Sunday, and Chris Paul and Mike D’Antoni picked up technical fouls because of it.

Paul hit a big three-pointer with less than a minute left in the third to cut Golden State’s lead to five, and he felt like he was fouled on the shot. He waved his hands in the direction of the official to express his frustration with the non-call, and he was immediately hit with a technical.

Chris Paul drains a 3, thought he was fouled, picks up a technical. pic.twitter.com/IF3DLYMDlM

D’Antoni agreed with CP3, and he became even more animated over the non-call that Paul was. That resulted in the Rockets coach also receiving a technical, which allowed Golden State to end the third quarter on a high note.

It looked like there was some contact on Paul’s shot, but he stuck his hip way out to create it. It’s no surprise he didn’t get the call, especially on the road.

The Houston Rockets have shown this season that they are not intimidated of the two-time defending champion Golden State Warriors, and Chris Paul let that be known after leading his team to another win over its Western Conference rival on Saturday.

Houston staved off a late comeback attempt from the Warriors to win 118-112. It was the third time the Rockets have emerged victorious in three meetings between the teams this season, and Paul wasn’t exactly quiet about it. He took a shot at Andre Iguodala after the game.

“What did [Andre Iguodala] say about the series last year? If he would have played, they would have swept us? Then he must be the X-factor,” Paul told Chris Haynes of Yahoo Sports. “That’s the punchline you needed, right?”

The Rockets had a 3-2 series lead over the Warriors in the Western Conference Finals last year, but they ended up losing the series after Paul was unable to suit up in Game 6 and Game 7 because of a hamstring injury. Houston players couldn’t help but feel like they would have made it to the NBA Finals if Paul didn’t get hurt, though Steve Kerr and others on the Golden State side had a much different opinion, as Iguodala also missed several games in the series with an injury.

Regular season games mean very little in the grand scheme of things, but the Rockets should have plenty of confidence if they face Golden State again in the postseason. As long as CP3 can remain healthy, they’ll have as good a shot as any team of knocking off the NBA’s best. 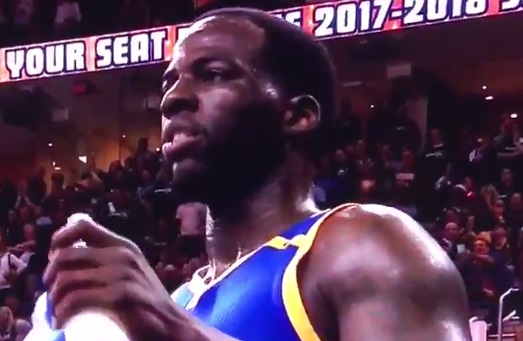 Just before halftime of the Golden State Warriors-Houston Rockets game, Green screened Paul around midcourt and knocked the guard to the floor:

Paul got up slowly from the blindside hit and was holding his ribs afterwards.

Draymond Green pancake blocked Chris Paul on the final play of the half. CP3 is holding his ribs on the left side as he slowly walks to the locker room.

The screen from Green helped the Warriors make a spectacular play just before the half as Andre Iguodala had a layup to beat the buzzer.

They may have to draw a chalk outline on the floor for where Paul’s body was after that screen.

Chris Paul and LeBron James may be good friends off the court, but CP3 showed his buddy no love on it.

Just before halftime of the Houston Rockets’ game against the Lakers in Los Angeles on Thursday night, Paul made a controversial move on James. LeBron was driving and put up a shot in the paint that missed. James and Paul then battled for the rebound, with the much smaller guard yanking on LeBron’s arm:

James was on the Staples Center floor afterwards cradling his left arm. He was helped up and then went to the free throw line.

Maybe that was incidental contact by Paul, but it’s not like we haven’t seen him pull off dirty plays before.