Ja Morant taken off in wheelchair after rolling left ankle Ja Morant was taken away in a wheelchair after rolling his left ankle during Monday night’s game at the Brooklyn Nets.

Morant was down in pain after the injury and seated in a wheelchair.

Ja Morant just left the court in a wheelchair.

The Grizzlies later said that Morant would miss the rest of the game with a sprained ankle.

Morant, who was last season’s NBA Rookie of the Year, had seven points and three assists prior to suffering the injury. He averaged 17.8 points and 7.3 assists per game last season.

Morant is a franchise cornerstone for the 0-2 Grizzlies.

Ja Morant put the smack down on a couple of college players after they talked some trash to him on Monday night.

Morant’s alma mater, the Murray State Racers, faced Austin Peay on Monday. The Governors won the game 74-70, which apparently led some current Austin Peay players to think they had bragging rights on Morant.

A few players talked trash to Morant via Twitter. Forward Mike Peake tried to rub in the win. So Morant responded by pointing out that Peake only had two points in the game and didn’t really have a right to talk his trash.

He tried talking trash to Ja Morant after scoring 2 points on 1-5 shooting pic.twitter.com/r8VBNDJiLR

Another player, Alec Woodard, also tweeted Morant. The reigning NBA Rookie of the Year defended himself for responding to them, saying they took the first shot at him and he was only replying.

lol i was chilling . they shot first i shot back . i got aim tho

Morant is Murray State’s most famous basketball player. He also went 4-0 against Austin Peay. Those reasons explain why the Austin Peay players went after him, and why they don’t have much of an argument.

Ja Morant was one vote away from being named unanimous Rookie of the Year, and he now knows the identity of the media member who didn’t back him.

The NBA released the full balloting for awards on Saturday. As had been previously announced, Morant received 99 of 100 first-place votes in Rookie of the Year balloting. With the release of the ballots, however, we learned that the only voter who didn’t back Morant was Joe Cowley of the Chicago Sun-Times, who voted for Zion Williamson with Morant in second.

Morant had a response for Cowley, and it was a bit more polite than you might expect.

appreciate you i’m not gonna do too much , ima let everybody else do dat . i just wanna know why lol

Morant is right to ask. He had an excellent rookie season, putting up 17.8 points and 7.3 assists per game in 67 games. Williamson was excellent when he played, but he only appeared in 24 games.

The Memphis Grizzlies guard had wanted to know who didn’t vote for him so he could thank the voter for the motivation. He’s essentially kept his word. It can’t be easy to do, as Morant easily could have gotten angry. Instead, he’s taken the high road.

Ja Morant on Thursday was announced as the NBA’s Rookie of the Year, but he’s still not satisfied.

The Memphis Grizzlies guard, who was the No. 2 overall pick in last year’s NBA Draft, was a nearly unanimous pick. He received 99 of 100 first-place votes, with the other going to Zion Williamson.

Miami’s Kendrick Nunn finished second and Williamson third in voting. And Morant is concerned about the one vote he did not receive.

Ja Morant wants to send a DM to the one person who didn't vote for him to win ROY.

"Thank them for motivating me even more." pic.twitter.com/PycTNByPst

“I need to figure out who was that person who didn’t pick me first. I want to shoot a direct message to them and thank them for motivating me even more to do more and be better. If anybody knows who that is, let me know,” Morant said.

Williamson only played in 24 games during the season, compared to 67 for Morant. Your team would have to almost go 24-0 in those games for me to consider your body of work more valuable than the guy who played at a high level for nearly three times as many games.

What we do know about Morant is that he loves focusing on his detractors as a motivational tool. 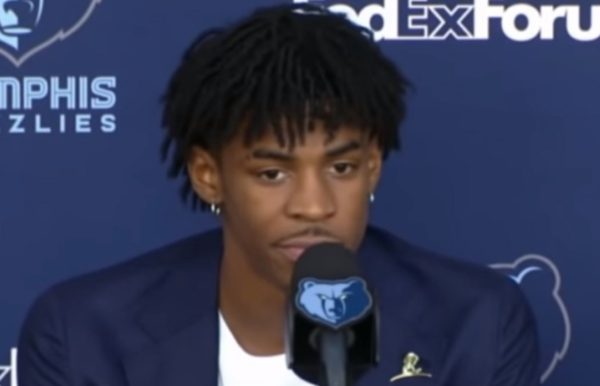 Ja Morant spent part of his quarantine time working on a new personal logo, and he debuted it on Thursday.

The Memphis Grizzlies rookie arrived in Orlando for the NBA bubble and had his logo on his mask and hoodie.

Ja Morant debuts his new “JA 12” personal logo as he arrives in Orlando.

Morant’s logo is similar to Tom Brady’s “TB12”. The two share the same jersey number, and much like Brady’s logo, the letters have the number built in.

Morant, 20, was the No. 2 pick by the Grizzlies and is averaging 17.6 points and 6.9 assists per game this season. He is signed with Nike.

The Memphis Grizzlies will not have a cakewalk to officially clinch a playoff spot, but Ja Morant appears to be ready for the challenge.

In a tweet on Friday, the Grizzlies guard seems to indicate his approval of the team’s new schedule, which was released earlier in the day.

The NBA will hold eight regular season seeding games to begin July’s planned restart of play in Orlando. The Grizzlies, who were No. 8 in the West when the season was suspended, will have to finish over four games ahead of the No. 9 seed in the conference to clinch a playoff berth outright. Otherwise, the two teams will go to a play-in tournament to determine who gets the final spot.

Memphis actually got one of the hardest draws in the league, including games against the NBA-best Milwaukee Bucks and the defending champion Toronto Raptors. Meanwhile, the New Orleans Pelicans, a likely challenger for the West’s final playoff seed, received one of the easiest schedules.

Strength of schedule for the NBA restart: pic.twitter.com/uha6fDWNF4

Some indications are that the league wants the Pelicans and star player Zion Williamson to make the postseason, but Morant and the Grizzlies definitely seem to be intent on disrupting those plans.

Zion Williamson was unable to overtake Ja Morant in the Rookie of the Year race, in part due to the early suspension of the season, but the New Orleans Pelicans star seems to be at peace with the situation.

In an interview Monday with Ernie Johnson that aired on the NBA’s official social media pages, Williamson spoke on his Memphis Grizzlies counterpart Morant likely winning Rookie of the Year honors.

“My goal was if I could rally my team to the playoffs, hopefully I could make a run for it,” said Williamson, per Christian Clark of the New Orleans Advocate. “But it’s God’s plan at this point. If Ja wins it, I’m going to be happy for Ja.”

Williamson missed the first three months of the season as he recovered from meniscus surgery, and the Pelicans fell behind in the Western Conference playoff picture in his absence. When he finally did make his debut, he only got 19 games to make an impact before play was suspended on March 11.

As for Morant, who was drafted No. 2 overall last year to Williamson’s No. 1, he was a big reason why the Grizzlies outperformed expectations this year. With 17.6 points and 6.9 assists per game, the former Murray State star had led Memphis to the No. 8 seed in the West when the season was suspended.

Williamson certainly had his moments this season though, and it sounds like he is doing a good job of maintaining perspective here with his entire NBA career still ahead of him.

LeBron James had nothing but super high praise for Ja Morant after facing the rookie’s Memphis Grizzlies on Saturday.

Morant scored 27 points and added 14 assists in Memphis’ 105-88 win over James’ Los Angeles Lakers. That was a huge win for the Grizzlies, who are contending for the final playoff spot in the West.

The excellent performance, coupled with Morant’s play all year, led to praise from James after the game.

“The kid is super special,” James said Saturday via ESPN’s Dave McMenamin. “Like I said when we just played him in L.A., Memphis got a great one. They got a great one. So, the sky’s the limit for the kid.”

LeBron is not alone in his praise of Morant. The No. 2 pick out of Murray State has averaged 17.7 points and 7.0 assists per game this season and has already given Grizzlies fans huge hopes for the future. He’s also a contender for NBA Rookie of the Year.

James wouldn’t say that about any player either, so that means something extra and probably will only motivate Morant to continue being the best player he can be.

After dropping a huge 27-6-14 line in a blowout win over the Western Conference-best Los Angeles Lakers on Saturday, the Memphis Grizzlies star rookie dedicated the victory to a Twitter troll in his postgame interview.

“I’m thankful for this guy who tweeted and said I don’t have that fire in my eye no more,” said Morant. “That game right there was for him. That’s what I do, I prove people wrong each and every night, and that’s for him right there.”

Soon after giving the interview, Morant pointed out the offending tweet in question from a user named Daniel Greer, who had indeed taken a shot at his competitive fire in a post earlier this weekend.

I liked it when Ja had that fire in his eye. He doesn’t look like he wants it more than others. #NoChip

The 20-year-old Morant is the frontrunner for Rookie of the Year honors, and Saturday’s win snapped a five-game losing streak for the Grizzlies. He recently took offense to a much more notable person coming his way on social media, and he is probably hoping that the folks just keep on tweeting at him.