Look: Russell Westbrook, James Harden cheer on the Astros behind the plate in Game 6 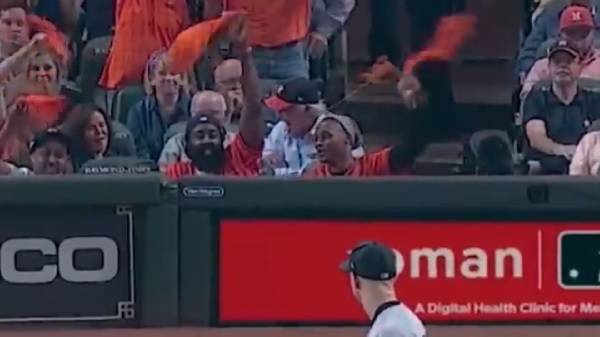 The Houston Astros had some famous fans in attendance behind home plate for Game 6 of the ALCS.

Harden and Westbrook having a blast pic.twitter.com/S09ImHHHp5

Will Harden and Westbrook be able to get along on the court? We still don’t know. Right now, they’re certainly getting along off it. Rockets fans will also be pleased to see Westbrook bedding in and supporting Houston’s sports teams even if he’s new to town.

Harden and Westbrook are enthusiastic about teaming up. Watching the Astros play for a World Series berth isn’t exactly a bad bonding exercise either.

James Harden continues to come up with creative ways to improve his game.

As if having a signature stepback weren’t enough, Harden worked to perfect a new 1-legged shot over the summer (watch here). The 2017-2018 MVP said on Monday that the new shot is “already natural.”

“It’s already natural,” James Harden said about his one-legged 3. He’ll keep mixing them in, but he agrees with Mike D’Antoni that he doesn’t necessarily need to add to his shot arsenal. pic.twitter.com/9DnxRAGxCs

It doesn’t sound like Harden is going to be using the new move at a high clip during games, but if it’s this natural already, we may see it before long.

Harden’s Houston Rockets took a big gamble by trading for Russell Westbrook over the summer. They felt they had been left out with numerous other contenders improving over the offseason and did what they could to change things up and improve. We’ll begin to see before long what kind of results they get.

James Harden sounds pumped up about playing with Russell Westbrook again and thinks they can do some big things.

The Houston Rockets were being left behind this summer as many teams around the league improved. But then they got in on the mix in July by trading Chris Paul to the Oklahoma City Thunder for Westbrook.

Playing with Westbrook reunites the two; they were also teammates on the Thunder before Harden was traded to Houston in 2012. They also know each other from youth basketball in the Los Angeles area.

Harden knows what kind of style Westbrook brings to the table and thinks the 2016-2017 NBA MVP is a “killer.”

“But I’m more excited to go into war, postseason, with somebody that is, like, a dog,” Harden told Bleacher Report’s Howard Beck. “Somebody that’s a killer, for real.”

As much as that’s Harden talking up Westbrook, it also can be interpreted as Harden pointing out qualities his previous running mate — Chris Paul — may have lacked. After all, it was CP3 who was supposed to help the Rockets cash in on a title, but Paul kept getting hurt and missing time, leaving much of the load to Harden.

Maybe Westbrook’s “dog” mentality is what Houston needs to take the next step. Harden seems to think so.

James Harden still seems a little annoyed with the media over their selection of Giannis Antetokounmpo for NBA MVP.

Harden came in second in MVP voting last season, receiving 23 percent of first-place votes, compared to 78 percent for Antetokounmpo, who won it. In August, Harden appeared on 97.9 The Box in Houston and said he felt a media-driven narrative helped propel Giannis to the award.

During an interview with GQ to promote his new shoe that was published on Thursday, Harden was asked those comments and whether a narrative has already been constructed entering the upcoming season.

“Nah, it hasn’t happened yet, it’s too early. Wait until the preseason and when the regular season starts up again. But they [the media] for sure got some teams they locked in on. We all know. That’s just what it is. You can’t tell me that a guy whose team was a 14-seed at one point last year, and ended up a four-seed with everything that was going on—so many injuries—and who went on a 32-game 30-point streak, eight 50-point games, two 60-point games in one season…and all the talk was about [Giannis Antetokounmpo]? There’s no way,” Harden told GQ.

“I just had to look at what I could do to get better for next year. You can’t pout or be mad, and the kid had an unbelievable season, so did his team. But the things I was putting up were legendary. You going to look back in 10, 15 years from now and be like, is that really true? Did that really happen? That’s some stuff they were doing back when Kareem [Abdul-Jabbar] and all those other guys were playing. But I’m happy. We have a team goal of winning a championship, and I’m ready to get going now.”

Harden averaged 36.1 points per game last season, which was the 7th-highest amount ever — behind only guys like Wilt Chamberlain and Michael Jordan. However, Harden won MVP the year before, so he could be right that the media wanted to see some variety and focused on Antetokounmpo for the award instead. The other big factor is that Giannis’ Milwaukee Bucks were the top team in the East, whereas Houston began the season poorly. Their respective records likely had a big role in the voting.

These comments may get some attention, but they’re nothing compared to what Houston’s GM said this summer about Harden.

James Harden is a masterful offensive player and may be adding a new move to his arsenal.

Rico Hines, a player development coach for the Sacramento Kings, shared video on Instagram Sunday that shows Harden playing on the practice courts at UCLA. The video shows Harden faking one way and then moving the other to take a running one-legged 3-point shot:

Harden’s move seems very atypical. Players use crossover moves, but few ever take long-distance shots on the run the way Harden did. They’re usually moving towards the basket on runners, not going sideways. It takes an incredible amount of leg strength to push off for a shot like that.

Harden has already perfected the step-back 3-pointer and is the best in the league at drawing fouls, which frequently annoys critics.

Houston Rockets GM Daryl Morey already called Harden the best scorer in history. Despite that label, he is still working constantly to improve.

Houston Rockets general manager Daryl Morey is known for having controversial opinions and making bold statements, and he is going to stir things up with his latest comments.

Morey joined “Selfmade with Nadeshot” for an interview. They talked about several subjects, including James Harden. Morey has long been a huge proponent of Harden and even says that the data shows Harden is a better scorer than Michael Jordan.

“It’s just factual that James Harden is a better scorer than Michael Jordan,” Morey said. “You give James Harden the ball, and before you’re giving up the ball, how many points do you generate? Which is how you should measure offense, James Harden is by far No. 1 in NBA history. And he was No. 1 even with the Oklahoma City Thunder, it was just a little more hidden. So you needed good data to suss that out. So we knew he had that amazing skill to be a scorer.

“Now the counter argument is reasonable. They say if you put Michael Jordan on a team now, he would do more than James Harden. That’s possible. But if you’re just saying, NBA history, if you give this guy the ball, how much does this guy score before the other team gets the ball? It’s James Harden.”

The funny thing about numbers is: if you know how to use them, you can make almost any argument you want. Morey is choosing a specific metric for how he measures scoring, and that one indicates Harden is the best. Does that mean Harden is a better or more complete player than MJ? No, but for that particular stat, Harden stands above all others.

As smart as Morey seems to be, even he admits he didn’t think Harden would become as good as he did.

The James Harden and Chris Paul partnership may be over, but Harden still wanted to set the record straight about their relationship.

Harden said Saturday that talk was a “rift” and that he has “nothing negative to say” about Paul after he was traded to the Oklahoma City Thunder.

.@JHarden13 on Chris Paul and all the media chatter the last few weeks, said it was all " false talk. Chris was great with him while he was here, great leader. Guys have disagreements on the court all the time. I've got nothing negative to say about Chris." @KPRC2

Despite Harden’s comments, it’s pretty clear he and Paul didn’t always completely see eye-to-eye. This had been pushed aside by Houston as normal behavior between two stars, but Harden probably doesn’t mind the fact that he’ll instead be playing alongside Russell Westbrook next season.