The NBA MVP award is becoming a two-player race between Nikola Jokic and Joel Embiid, and the Denver Nuggets are doing their best to send a message about the award.

The Nuggets on Thursday shared a tweet about the MVP race. They responded to a tweet that noted Jokic was the first player in NBA history with 2,000 points, 1,000 rebounds and 500 assists. Their comment said “Sorry, these stats are way too advanced. We don’t understand.”

Sorry, these stats are way too advanced. We don't understand🤡 https://t.co/1bQzCjB3MX

What’s the story? Some detractors say that Jokic only looks good in the advanced stats metrics. So the Nuggets were pointing out that Jokic also has some impressive traditional stats as well, considering points, rebounds and assists are as traditional as it gets.

No matter how you slice it, Jokic is a very deserving pick for NBA MVP. Embiid is too. Your choice comes down to how you weigh each of the players and their contributions, plus some possible personal preference. Nikola Jokic may be putting the finishing touches on a second straight MVP campaign, all while looking like a character straight out of “Cobra Kai.”

The Denver Nuggets center briefly had to leave Thursday’s game against the Memphis Grizzlies after taking an elbow to the head from Jaren Jackson Jr.

Jokic, who was bleeding as a result of the hit, returned to the game later on in the quarter wearing a vibrant red headband.

Twitter loved the new look and shared some funny memes about it.

Headband Jokic going back to his childhood days 📛😤 pic.twitter.com/dpIcrV19RX

Headband Jokić has entered the game.

The headband must have been like The Silver Surfer’s board and given Jokic superpowers because he went on to absolutely light Memphis up. He ended up with 35 points, 16 rebounds, six assists, five steals, and a block in a 122-109 win for Denver. That led to even more jokes on Twitter.

Jokic as soon as the headband went on pic.twitter.com/yrPQzOo4Hw

The Nuggets clinched a top-six seed in the West with the win over Memphis, thereby escaping the play-in tournament. There are plenty of teams that do not want to see Denver in the playoffs, especially if the headband look works for Jokic as well as it once did for this guy in the postseason. 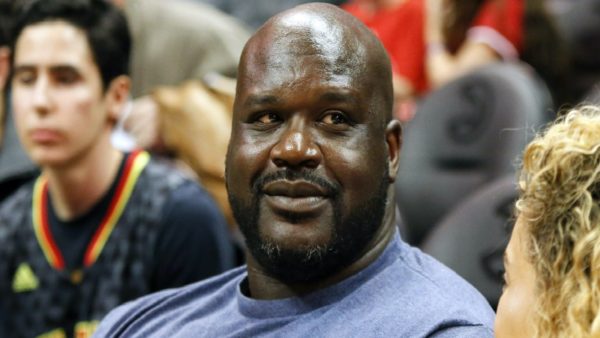 The retired NBA great O’Neal interviewed Denver Nuggets star Nikola Jokic on TNT after Denver’s win over the LA Clippers on Tuesday. O’Neal tried to close out their interview by speaking a line of Serbian to Jokic and calling Jokic by his nickname “Big Honey.” Unfortunately, O’Neal fell flat on his face and called Jokic “Big Soul” instead. When Jokic pointed out his goof, O’Neal then blamed his producer for giving him bad info.

Check out the hilarious video.

O’Neal has proven himself to be a successful NBA player, television analyst, and businessman. But in terms of other skills, O’Neal’s language-speaking ability is probably about on par with his ability to act in movies.

The Basketball Hall of Famer is not much better with other European languages either. A couple seasons ago, O’Neal also confused another foreign NBA star by butchering his native tongue.

76ers had to delete tweet after losing to Nuggets

The Philadelphia 76ers had a real “congratulations, you played yourself” moment this week.

Philadelphia faced off against the Denver Nuggets in a national TV battle on Monday. The game pitted two of the best centers in the NBA, Joel Embiid and Nikola Jokic, against each other.

The 76ers raced out to a double-digit lead and led by as many as 19, carrying their lead into the second half. That prompted the team’s Twitter page to post a message that read “simple math: 21 > 15” along with an Embiid highlight. Embiid wears jersey No. 21 while Jokic wears No. 15.

Unfortunately, the jinx was in full effect as the 76ers wound up blowing the lead and losing by a final score of 114-110. The team decided to delete their tweet … but not before the Nuggets captured a screenshot. After the game went final, the Nuggets clowned the 76ers over the tweet gone wrong.

Yeah… probably a good call on this delete pic.twitter.com/VAf3dBzEKk

Embiid did score 34 points to Jokic’s 22. But Jokic walked out of there with the W, so that is all that mattered. As for the 76ers’ tweet, it is a good lesson to never start gloating early. You would really think the 76ers would know better too after this notorious episode of theirs from a few years ago.

Markieff Morris clearly likes Nikola Jokic about as much as a parking ticket.

The Miami Heat forward Morris made his return to the lineup on Saturday after 58 games missed with injury. He was hurt when the Denver Nuggets center Jokic violently knocked him down in November (video here).

After Saturday’s game, Morris, who scored six points in 17 minutes, had a vulgar response when asked about Jokic, particularly on if he had heard from Jokic during the four-plus months that he was out.

“F–k no,” said Morris, per the South Florida Sun Sentinel’s Ira Winderman. “I don’t want to hear from him. He did what he did. It is what it is.”

Morris was the one who initiated the Jokic incident and should not have elbowed him in the ribs. But Jokic’s retaliatory response was way out of proportion and uncalled for, causing big injury to Morris’ back and neck (though that was not the only reason why Morris missed so much time).

The 32-year-old Morris is only on a one-year deal this season, so the Jokic hit likely cost him a shot at a bigger contract, something he probably won’t have enough time to position himself for in the final months of the season. Morris has also previously made clear on Twitter that he despises Jokic.

Markieff Morris is officially back for the Miami Heat after missing 58 entire games thanks to a cheap shot from Denver Nuggets center Nikola Jokic. Now we are learning exactly why Morris missed so much time.

Morris was injured Nov. 8 in a violent incident with Jokic (video here). He suffered whiplash on the hit from Jokic, a major concern because Morris previously suffered a neck injury while with the Washington Wizards in 2019. You can read more about his 2019 injury here.

The veteran forward had been wanting to play for a while. As early as last calendar year, Morris was saying that he would be back soon. It has taken until mid-March for him to actually return though, but Morris is back for Miami’s contest against Minnesota on Saturday. That is good news for the Eastern Conference-leading Heat, who have enjoyed great depth at pretty much every position this season except for power forward.

Steve Kerr’s Golden State Warriors lost to the Denver Nuggets on Monday night, and that was all Kerr needed to determine his NBA MVP vote.

The Nuggets beat the Warriors 131-124, getting 32 points, 15 rebounds and 13 assists from Nikola Jokic. The triple-double was the second in a row for Jokic.

The big game prompted the Kerr to say that Jokic is his pick for NBA MVP.

Kerr, while he doesn’t have a vote, says Nikola Jokic should win MVP again this season.

“He was spectacular tonight. Makes all of his teammates better, he makes defense so difficult and he’s playing the game at such an easy pace.”

That’s pretty notable considering one of Kerr’s players, Steph Curry, has also been in consideration for the award. But the betting favorite is Joel Embiid, with Jokic behind him according to most oddsmakers.

Embiid’s case has been supported by many basketball analysts, but the Warriors coach thinks Jokic should win the award for the second straight season. Nikola Jokic is known for his incredible passing ability, which seems even more exceptional because it comes from a big man. But the amount of praise he deserves for his passing cannot be understated. On Sunday, he was at it again, delivering the most ridiculous pass of the NBA season.

Jokic’s Denver Nuggets won in Portland 124-92 on Sunday. The reigning NBA MVP only had eight points because he was only needed for 26 minutes. But he added 18 rebounds and 11 assists.

He missed out on another assist after this pass to the corner just before halftime.

I have absolutely no idea how Nikola Jokic A. knows this pass is there. B. executes this pass. C. puts a no-look pass with spin almost right in Morris’ shooter’s pocket. D. even thinks to throw it from that angle. pic.twitter.com/xMGwgZaN7V

How did Jokic know where to whip that pass? How did he even know one of his teammates was there? That was a complete whip around he did, with him delivering a 180-degree no-look pass. Nobody saw it coming.

Jokic seems to deliver pretty passes with regularity. In January, we highlighted a great one he made to assist a winning shot against the Clippers. This one was even more special due to the 180-degree no-look he delivered.

Nikola Jokic admits he was wrong about new teammate

Nikola Jokic apparently had some trepidation about one of his new teammates and whether they might be a disruptive locker room presence. As it turns out, he was wrong about that.

Jokic hinted Sunday that he was a bit nervous about the Denver Nuggets bringing DeMarcus Cousins in on a 10-day contract, as the two were “kind of rivals” in the past. Jokic said, however, that Cousins “proved me wrong” and that the veteran center has a “great personality.”

Nikola Jokic says DeMarcus Cousins can help the Nuggets going forward. Also this: “I love him. Before, we were kind of rivals. He’s actually a really good guy. Fun to be around. Great personality. Can get a little bit crazy when the refs don’t go his way. He proved me wrong.” pic.twitter.com/0X3blmDJMs

Cousins’ reputation does precede him. He’s known as a combustible personality prone to losing his temper during games. However, most of Cousins’ issues have come with referees and at least one former coach, not with teammates. If anything, Cousins has shown himself to be a pretty great teammate at certain points.

Jokic has had his fair share of spats with referees and opponents. He should probably know not to judge guys based on that alone.

Miami Heat forward Markieff Morris has missed nearly three months after getting hit with a cheap shot from Denver Nuggets center Nikola Jokic. Now there is reason to doubt Morris’ availability for the rest of the season too.

Barry Jackson of the Miami Herald reported on Saturday that Morris wants to play after 43 games missed and counting but that the Heat still have not cleared him to do so. Without mentioning specifics, Jackson added that the team has concerns that are “significant enough” to make them uneasy about clearing Morris to play at this point due to potential liability issues.

The report also notes that Morris previously missed time when he was with the Washington Wizards in 2019 because of a bout with neck and upper back stiffness. At the time, he was diagnosed with transient cervical neurapraxia and missed six weeks of action.

You can read more details about cervical neurapraxia as well as about Morris’ current situation with the Heat in Jackson’s full article here.

If you recall from the Heat-Nuggets game on Nov. 8, Jokic took a vicious shot to Morris’ back and neck area after Morris gave him a shot to the ribs (video here). Despite Morris’ lengthy absence, Miami is still second in the East at 33-20. That means that the risk when it comes to clearing Morris might greatly outweigh the reward right now.