The Brooklyn Nets continue to absolutely load up for a championship run.

As first reported by ESPN’s Adrian Wojnarowski, the Nets have agreed to sign veteran forward LaMarcus Aldridge for the remainder of the season. Aldridge’s agent, Jeff Schwartz, later confirmed the agreement to ESPN.

Agent Jeff Schwartz of @excelbasketball confirms Aldridge's commitment to signing with Nets to ESPN now. Nets have secured Aldridge and Blake Griffin in the buyout market. Brooklyn is loaded for a title run. https://t.co/KchOTq7Foj

This comes as a bit of a surprise, as a different team was viewed as a frontrunner for Aldridge after he was bought out by the San Antonio Spurs. Ultimately, the appeal for Aldridge became obvious. The team should be able to afford the veteran forward playing time, and he will have a great chance to win a title alongside James Harden, Kyrie Irving, and Kevin Durant.

Aldridge averaged 13.7 points and 4.5 rebounds per game for the Spurs this season. He’ll be able to take on a complementary role in what has become a loaded Brooklyn rotation.

Bob Myers is apparently one heck of a crisis negotiator.

The Golden State Warriors GM spoke with reporters this week and addressed Kelly Oubre’s controversial recent comments. Oubre had indicated that he would be unwilling to come off the bench when Klay Thompson returns from injury.

“I like what [Oubre] said,” replied Myers, per Connor Letourneau of the San Francisco Chronicle. “He should want to start.”

Myers added that he has spoken to Oubre’s agent about what Oubre’s role will look like if he returns to the team.

Oubre’s comments caused a strong reaction because he will be a free agent this summer. The Warriors also paid a hefty luxury tax bill to acquire him. The timing of Oubre’s remarks, right after the NBA trade deadline, fanned the flames even further.

The 25-year-old Oubre is a full-time starter on the wing for the Warriors this season, averaging 15.2 points and 5.8 rebounds per contest. Thompson’s return is looming for next season, but he may have to integrate slowly back into the lineup following back-to-back devastating injuries. Perhaps Myers can envision a future in which Oubre, Thompson, and Andrew Wiggins can all co-exist peacefully.

Andre Drummond is soon to become available for interested teams, and the Los Angeles Lakers may be the leaders for him.

Los Angeles Times reporter Brad Turner said on Friday that the Lakers are the “front runners” to land Drummond. However, he noted that the Lakers have competition for the big man.

With André Drummond getting buyout from Cleveland, the Lakers appear to be front runners to land the center, sources said. But the Lakers have competition from other teams.

Additionally, the Lakers reportedly have made acquiring Drummond their priority.

The Cavaliers were unable to trade Drummond and agreed to a buyout with him on Friday. The 27-year-old is averaging 17.5 points and 13.5 rebounds per game this season. The Lakers could especially use him with Anthony Davis and LeBron James both out.

Kyle Kuzma shares why he bleached his hair blond again Kyle Kuzma has done it again.

The Los Angeles Lakers forward bleached his hair blond yet again. The hair color was visible when Kuzma spoke with the media on Thursday.

You may recall that Kuzma also went blond at the start of last year, though he looked a little different.

According to Ryan Ward, Kuzma said that Anthony Davis told him to do it. Maybe Davis felt that the Lakers needed Kuzma to change the Lakers’ fortunes amid a four-game losing streak.

Kuzma is averaging 12.4 points per game this season, but he may have a larger role with Davis and LeBron James out.

Tilman Fertitta traded his stars to rivals of Sixers to spite Daryl Morey? 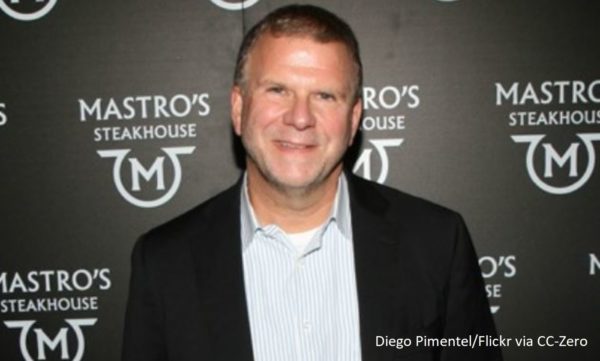 James Dolan may have new competition for the pettiest owner in the NBA.

Bleacher Report’s Jason Dumas tweeted this week that the icy relationship between Houston Rockets owner Tilman Fertitta and Philadelphia 76ers GM Daryl Morey encouraged Fertitta to send his star players to rivals of the Sixers. Dumas mentions James Harden, who was traded to the Brooklyn Nets, and PJ Tucker, who was dealt to the Milwaukee Bucks.

Something similar also happened with Victor Oladipo, whom the Rockets acquired as part of the Harden deal. Houston traded Oladipo to the Miami Heat, last season’s Eastern Conference champion, for pennies on the dollar.

Morey was GM of the Rockets for 13 years. But he had a falling out with Fertitta that helped lead to his departure from the team last summer.

We know Fertitta does not want to do business with Morey and the Sixers. But intentionally trying to sabotage them by helping out their rivals is on a different level of spitefulness entirely.

The Houston Rockets have been unbearably bad since James Harden was traded earlier this season, but Friday’s performance may have hit a new low.

The Rockets appeared to be on their way to a win against the lowly Minnesota Timberwolves, taking a 101-85 lead with 7:31 to go in the game. As it turned out, the Rockets wouldn’t score again. The Timberwolves went on a 22-0 run to end the game to pull off a 107-101 comeback victory over the stunned Rockets.

The comeback was largely predicated on the Timberwolves getting to the line. 10 of those final 22 points came at the stripe, with Minnesota converting every opportunity there. The Rockets, meanwhile, simply collapsed from the field, missing their last 14 shot attempts.

The Rockets just broke a 20-game losing streak this past week. There was some hope they might be able to be a bit more competitive with that off their backs and trade speculation no longer hanging over them, but they’ve lost another two straight since then. They’re even getting bested in the front office. It’s tough to see things getting any better from here.

Kelly Oubre may be putting the Golden State Warriors in a bit of a bind as they plan for their longer-term future.

The Warriors swingman received a question on Friday if he would be OK with coming off the bench for the team next season.

“I can offer a lot more than coming off the bench,” replied Oubre, per Connor Letourneau of the San Francisco Chronicle.

Oubre, who has started in all 43 of his appearances for the Warriors this season, is on an expiring contract. All-Star shooting guard Klay Thompson will be returning from injury next season, so any unwillingness on Oubre’s part to come off the bench will certainly complicate matters in Golden State.

Andrew Wiggins is also signed through 2023. Thompson does not see himself settling for a reduced role either. That means that something will have to give if Oubre wants to stay with the Warriors beyond this season.

Anthony Davis is making progress in his recovery from a calf injury.

The Los Angeles Lakers announced on Friday that Davis was re-examined by the team’s medical staff and is showing signs of progress.

“Anthony Davis … continues to progress in his recovery and has been cleared to advance his on court work. Additional updates will be given when appropriate,” the statement said.

Although this is good news, the reality is Davis is still a ways away from a return to the Lakers, according to coach Frank Vogel.

Frank Vogel says Anthony Davis has made progress but is still “a ways away” from returning.

This is tough for the Lakers. The defending champions are without both Davis and LeBron James, who is recovering from an ankle injury.