The Chicago Bulls would like to trade Rajon Rondo, but they have very limited time to accomplish that.

Rondo is set to make $13.4 million in the final year of his deal next season if he remains on the Bulls roster through Friday. However, the Bulls will only have to pay him $3 million if they renounce his rights before the end of the day. K.C. Johnson of the Chicago Tribune expects the team to end up doing just that.

Before Jimmy Butler was traded to the Minnesota Timberwolves, the Bulls said publicly that they want Rondo back and were planning to exercise his team option. According to Johnson, Chicago tried to include Rondo in some of the Butler trade scenarios but had no luck. Now, the 31-year-old point guard will likely be waived.

Rondo has been included in some recent trade proposals because of the way his contract is structured, including some larger scenarios with Butler before the deal with the Timberwolves materialized. Barring an unexpected trade opportunity materializing Friday, expect Rondo to be waived.

Sources said the Bulls and Rondo’s representatives discussed re-signing the veteran guard at a lower salary. But that’s a long shot scenario.

Dwyane Wade is likely to exercise his $23.8 million player option for next season, but that decision seems strictly financial. There’s a chance he could enter into a buyout discussion with the Bulls, but the team has said they are operating under the assumption that he will be on the roster next season.

The Bulls are clearly trending toward a complete rebuild with younger players like Kris Dunn and Cameron Payne. While Rondo looked like his old self before fracturing his thumb in the playoffs, his tenure in Chicago hasn’t exactly been free of drama. A parting of ways makes sense.

Report: Rajon Rondo buyout ‘a possibility’ for Bulls, Dwyane Wade will opt in

The Chicago Bulls may be about to blow it all up.

Sam Amick of USA Today reported that, in light of the Jimmy Butler trade, the Bulls have not yet approached Rajon Rondo about a buyout, but it is “a possibility.”

No discussion yet of a Rajon Rondo buyout with the Bulls after the Jimmy Butler trade, I'm told, but it's clearly a possibility.

In addition, despite earlier reports, Dwyane Wade will opt into the second year of his deal and take his $24 million.

Dwyane Wade is still taking his player option for $23.8 million next season, according to sources. The Jimmy Butler trade affects nothing

The Bulls will have some decisions to make. Rondo has a team option with a $3 million buyout, while Wade has no interest in being part of a rebuilding effort at this stage of his career. The Bulls are clearly trending that direction, though, so there will be a lot of talk about buyouts and trades in the days and weeks to come.

Rajon Rondo will not play in Game 5, unsure about Game 6

There was some brief optimism on Tuesday that Rajon Rondo may be able to play in Game 5 of the Eastern Conference semifinals against the Boston Celtics, but the Chicago Bulls point guard is not ready to return.

After having another X-ray on his fractured right thumb Tuesday night, Rondo said Wednesday that he is still a no-go.

Rondo said he's not playing tonight. He had another x-ray last night. Bone is still the same.

Rondo: "I think I'm Wolverine but it hasn't actually healed."

The Bulls could desperately use Rondo back, as they were a totally different team in Game 3 and Game 4 after jumping out to a 2-0 series lead with Rondo on the floor. With Game 5 in Boston and the Celtics having stolen back momentum, Chicago could be in serious trouble.

Report: Rajon Rondo will try to play in Game 5

Rajon Rondo will try to play in Game 5 of the Chicago Bulls’ playoff series with the Boston Celtics, according to a report.

Rondo injured his thumb during Game 2 of the Bulls’ series and has missed the last two games, both losses for Chicago. He was initially expected to miss a few weeks with a fractured thumb, but the point guard had his cast removed and was seen attempting some shots on Tuesday.

The Vertical’s Shams Charania now reports that Rondo will try to play in Wednesday’s playoff game.

Rondo was a major factor in the two playoff games in which he participated. If he’s able to play in Game 5, that could potentially give Chicago a major boost.

The first-round series is tied 2-2. The Chicago Bulls have been dealt a major blow after getting off to a great start in their playoff series against the Boston Celtics, as Rajon Rondo will be sidelined indefinitely with a thumb injury.

The team announced on Friday that Rondo suffered a fractured thumb, and ESPN’s Adam Schefter reports that the point guard will not need surgery.

Rajon Rondo will not need surgery on his fractured thumb, but he is out for tonight's Game 3 and indefinitely.

Rondo’s absence could drastically change the Eastern Conference quarterfinals. While he has had his struggles during the regular season, Rondo lately has looked closer to the player who helped the Celtics win a championship in 2008. He had 12 points, six assists and eight rebounds in Chicago’s Game 1 win before posting 11 points, nine rebounds and a whopping 14 assists in Game 2.

The Bulls could have to alter their offensive approach without Rondo. He had looked like a true floor general in the first two games.

Celtics bracing for best of Rajon Rondo in playoffs

Rajon Rondo has a long history of stepping things up in the playoffs, and though most of the current members of the Boston Celtics weren’t with the organization with the point guard, they’re wary of what he can do.

Rondo has had an uneven season with the Chicago Bulls, but the current crop of Celtics, who are set to face him in the first round of the NBA Playoffs, know the lore and are expecting the best from Rondo.

“I’m a fan of the game. I know, whether he tries it or not, those big games he’s always gonna be ready for them,” Celtics point guard Isaiah Thomas said Friday, via ESPN’s Chris Forsberg. “He’s always gonna play his best [in big games]. And that’s just me watching him when I was younger and before I got in the NBA. You know, when it counts, he’s gonna be ready and he’s gonna perform. So we’ve got to slow him down and eliminate what he does best, and that’s getting everyone involved.”

Avery Bradley, the only Celtic who has been around long enough to have played with Rondo, concurred.

Rondo had a tumultuous season, averaging 7.8 points and 6.7 assists in a modest 26.7 minutes per game. He’s barely played in the playoffs since 2012, with only a brief stint with Dallas that saw him sent home early since then. His reputation precedes him, but he may struggle to live up to it. 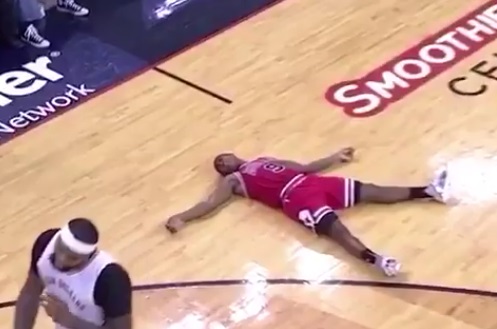 Rajon Rondo definitely has his flopping down.

Rondo was leveled by DeMarcus Cousins on a screen during Sunday’s Pelicans-Bulls game, and he hit the deck as if he’d run into a brick wall:

That happened with Chicago up 105-94 and five minutes left in the game. Rondo’s acting paid off, because he was hit with a technical foul.

Rajon Rondo is planning a big party to commemorate the 10-year anniversary of the Boston Celtics’ 2008 NBA title, and one prominent member of the team is not invited.

Rondo told ESPN’s Marc J. Spears that he is putting together a vacation with his former Celtics teammates, and the consensus from the 2008 squad was to not reach out to Allen.

Allen and Kevin Garnett came to Boston via trade during the 2007 offseason and joined Rondo and Paul Pierce in leading the team to its first NBA championship in 22 years. The team also reached the NBA Finals in 2010, ultimately losing to the Los Angeles Lakers.

In the summer of 2012, Allen took less money to join LeBron James, Chris Bosh, Dwyane Wade and the Miami Heat. One of the reported reasons was that he wasn’t getting along with Rondo. Allen helped the Heat win one of their two titles with LeBron in 2013.

“It will be a long story about that, but it is what it is,” Rondo said. “I don’t know a good analogy to put this in. It just wasn’t the greatest separation. It wasn’t the greatest thing that could’ve happened to us as a team, a bond. We were at war with those guys [Miami]. To go with the enemy, that’s unheard-of in sports. Well, it’s not so unheard of. It’s damn near common now.

“The mindset we had. The guys on our team. You wouldn’t do anything like that. It makes you question that series in the Finals … Who were you for? You didn’t bleed green. People think we had a messed-up relationship. It’s not the greatest. But it’s not just me. I called and reached out to a couple of other vets and asked them what they wanted to do with the situation. They told me to stick with what we got [without Allen].”

For what it’s worth, Leon Powe — a role player with the 2008 Celtics — said his “preference” would be that Allen is invited. Another anonymous member of the team said he has no problem with Allen’s exclusion because “(Ray) left to the enemy.”

It is somewhat surprising that Rondo and some of his former teammates aren’t ready to bury the hatchet with Allen. You knew when Garnett made remarks like this years ago that Allen was persona non grata for a while, but typically time heals all wounds. Apparently not in this case.