One Los Angeles Lakers legend will not be getting invited to Taco Tuesday at LeBron James’ house.

After this week’s preseason opener against the Sacramento Kings, the Lakers star James was asked about Basketball Hall of Famer Kareem Abdul-Jabbar as he closes in on Abdul-Jabbar’s all-time NBA scoring record.

James bluntly replied that he had “no thoughts and no relationship” with the big man great Abdul-Jabbar.

LeBron was asked about his thoughts & relationship with Kareem.

“No thoughts & no relationship.”

The four-time champion James likely has a sour taste in his mouth because of Abdul-Jabbar’s harsh public criticisms of him. Abdul-Jabbar, a longtime activist who has amplified his voice for social change through op-ed pieces in recent years, has gone after James multiple times since James became a Laker. Abdul-Jabbar has taken issues with everything from James’ sharing of supposed misinformation regarding the COVID-19 pandemic to James’ antics on the basketball court. You can read more about their history here.

James now appears to hitting back at Abdul-Jabbar lately and left the 75-year-old off a recent list of his all-time Lakers (though James did include himself on the list).

What do you think about LeBron's all-time Lakers starting five? 🤔⁣

In fairness, Abdul-Jabbar has backtracked and issued public apologies to James over his various criticisms. In a new op-ed piece, Abdul-Jabbar even said James’ activism as an athlete was on par with those of Muhammad Ali, Bill Russell, Billie Jean King, Arthur Ashe, and Colin Kaepernick. But nonetheless, James still seems to be holding a grudge against No. 33. Brian Windhorst of ESPN reported this week that Towns came down with a throat infection that forced him to be on bed rest for days. The report adds that Towns also had trouble breathing because of the infection.

The three-time NBA All-Star Towns spoke to reporters about his health scare earlier this week. He revealed that he lost a significant amount of weight because of the illness.

Towns, who led Minnesota last season with 24.6 points and 9.8 rebounds per game, is now back with the Timberwolves after missing all of training camp. The regular season begins for Minnesota on Oct. 19, which gives the 26-year-old Towns plenty of time to get back up to speed after his illness. Spurs forward Jeremy Sochan has been going viral during the first few days of training camp and the preseason for his interesting look. Sochan has his hair dyed pink and blue and wears the No. 10 — naturally inviting comparisons to Basketball Hall of Famer Dennis Rodman.

The 19-year-old Sochan, who also played with his hair dyed during college at Baylor and is known for his pesky defense and rebounding, was asked about the Rodman comparisons at training camp.

“There will be times where people don’t like me,” replied Sochan, per Tom Orsborn of the San Antonio Express-News. “But I think that’s just the way basketball is played. Definitely been watching Dennis Rodman.”

Sochan, the No. 9 overall pick in this year’s draft, was born in 2003, well after Rodman played in his final NBA game. But that is not stopping him from channeling Rodman, who wore No. 10 on the Spurs and first began dyeing his hair while he was in San Antonio. Ben Simmons’ return to the court is not getting of to a great start.

Simmons was booed during his Brooklyn Nets’ preseason game against the Philadelphia 76ers on Monday night. You can hear the boos while Simmons was at the free throw line late in the first quarter.

Ben Simmons getting boo’d in his home arena after missing 2 free throws.

Though the game was played at the Barclays Center in Brooklyn, it’s possible the boos came from 76ers fans.

Simmons was drafted No. 1 overall by the Sixers in 2016 but missed his entire first season due to injury. Then he refused to play all of last season. Between his lack of availability, poor shooting and outright refusal to shoot the ball, Simmons became a big target of frustration from many Sixers fans. That appears to remain the case.

The Phoenix Suns could be set up for a record-breaking purchase price.

Veteran NBA reporter Marc Stein wrote this week in a post to Substack that multiple experts in sports team valuations would not be surprised if the Suns hit the $4 billion threshold in a potential sale.

For context, the current record for biggest sale of an NBA team was set in 2019 when Joe Tsai purchased the Brooklyn Nets for a total of $3.3 billion. In more recent years, the Utah Jazz and the Minnesota Timberwolves (two smaller-market teams) sold for $1.6 billion and $1.5 billion, respectively.

The Suns are a desirable franchise located on the West Coast who remain on the upswing after earning an NBA Finals berth in 2021 and winning a team-record 64 games last season. They also have a core of players who are 26 or younger (Devin Booker, Deandre Ayton, Mikal Bridges, and Cam Johnson) to go along with 37-year-old Chris Paul.

Owner Robert Sarver, who bought the Suns in 2004 for $401 million, has begun the process of selling the team. Sarver’s decision comes after he was sanctioned by the NBA for his racist and misogynistic behavior (and faced subsequent public pressure to sell). As for who his potential buyers might be, there have been a few reported candidates with some very deep pockets.

Karl-Anthony Towns is back with the Minnesota Timberwolves this week after suffering a recent health scare.

The three-time All-Star big man told reporters on Monday that he had to be hospitalized with a non-COVID illness. Towns revealed that he only started walking again on Saturday and that he was down to 231 pounds because of the illness.

“There was more drastic things to worry about than basketball at that moment,” said Towns, per Jon Krawczynski of The Athletic. “I wasn’t too worried about basketball for a while. But I miss the game, I love the game. I miss these guys.”

Towns, who is officially listed at 248 pounds, did not provide any further details about his illness. But it forced him to miss the entire first week of training camp for the Timberwolves.

Jordyn Woods, Towns’ girlfriend, had shared on social media that she took him to a Minnesota hospital right after her birthday (Sept. 23).

Jordyn Woods says on Instagram that she took Karl-Anthony Towns to the hospital when she arrived in Minnesota this past week.

Towns missed the first week of Wolves training camp, but will be back at practice early this upcoming week, per @JonKrawczynski. pic.twitter.com/1O9sIhoYHc

The 26-year-old Towns averaged 24.6 points, 9.8 rebounds, and 3.6 assists per contest for the Timberwolves last season. Towns also battled another difficult health situation in the middle of the year. 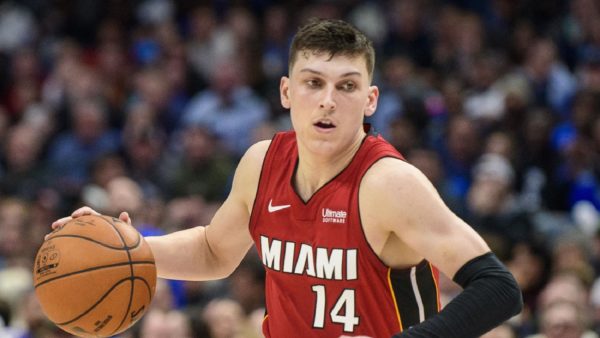 Tyler Herro is officially laughing all the way to the bank.

The Miami Heat shooting guard secured a new four-year extension from the team this week that could be worth up to $130 million. After news of Herro’s extension broke, he took to Twitter with a savage post. Herro tweeted a GIF of Bugs Bunny counting up money.

The tweet could be interpreted as a message to Herro’s haters. Many fans called for Herro to be traded this summer, and when he managed to survive his inclusion in multiple trade rumors, Herro seemingly gloated a little bit.

Some have already labeled Herro’s new extension as an overpay, citing his limitations defensively and his uneven postseason performance last year. But for a player who is still only 22, averaged 21-5-4 in 2021-22, and won Sixth Man of the Year, it seems like pretty fair value. Herro’s extension also has $120 million guaranteed (the other $10 million is in incentives) and is $20-$30 million below a max deal, per salary cap expert Albert Nahmad.

For the Heat, who were the top seed in the East last season and came within a hangnail of another Finals berth, Herro becomes their third $100 million player on the books (after Jimmy Butler and Bam Adebayo). In addition to extending Herro, Miami appears to have some interesting plans this season. Blake Griffin is going a bit left with his new jersey number in Boston.

The new Celtics big man Griffin revealed on Monday that he will be wearing No. 91 for the coming season. Griffin said that he is doing so as a tribute to retired Basketball Hall of Famer Dennis Rodman, who wore No. 91 on the Chicago Bulls.

The six-time All-Star Griffin, who signed a one-year deal with Boston a few days prior, becomes the very first player in Celtics history to wear No. 91.

Here is a picture of Griffin in his new threads, per Gary Washburn of the Boston Globe.

Griffin, who has worn the numbers 23, 32, and (most recently) 2 during his NBA career, mentioned a couple of years ago that he is a big fan of the ’90s Chicago Bulls. He also previously played for the Detroit Pistons (the team that Rodman began his NBA career with) and is a native of Oklahoma (where Rodman attended college at Southeastern Oklahoma State).

With starting big Robert Williams missing extended time with a knee injury, Griffin should be able to get playing time for Boston right out of the gate. As for Rodman, he was recently in the news again because of an interesting new movie about a particular era of his life. Pascal has been a real homegrown success story for Toronto. After the Raptors picked him in the late first round of the 2016 NBA Draft, Pascal blossomed into a star. At just 28 years old, Pascal has already won an NBA title with Toronto, made an All-Star team, garnered two All-NBA nods, and won NBA’s Most Improved Player. He has also led the Raptors in scoring in each of the last three seasons.

Toronto is always pretty strategic with their coaching hires. That makes the addition here of another Siakam to the organization pretty noteworthy, especially since Pascal is set to become a free agent in 2024.

Russell Westbrook has made an interesting move with his Instagram page.

The Los Angeles Lakers guard scrubbed his entire Instagram page of its posts.

Russ deleted all of his posts on IG again? pic.twitter.com/K8zs5KcedI

Not only are there no posts on his page, but there are not any mentions of the Lakers either.

Any time a famous athlete scrubs their social media page, it’s big news. Typically, athletes will take this step when they’re preparing for a big career move or change. Oftentimes this move is done to express dissatisfaction with a contract, or to seek a trade.

The timing of Westbrook’s social media move is notable.

Earlier in the day, a report said the Lakers were still considering trading Westbrook.

Westbrook is owed $47.1 million this season, which is his final year of his massive contract. He played poorly for the Lakers last season. The Lakers have also brought in Patrick Beverley and Dennis Schroder, which could make Westbrook expendable. Of course, the real challenge is finding a taker for the point guard.