Kirk Cousins had a little fun with a newspaper article that confused him with Pelicans star DeMarcus Cousins.

During last night’s game between the Thunder and Pelicans, DeMarcus Cousins was ejected in the third quarter for swinging an elbow that made contact with the head of Russell Westbrook. Westbrook remained in the game and recorded a triple double with 22 points, 16 rebounds, and 12 assists.

In a recap of the game, a newspaper article mistakenly wrote Kirk Cousins was the man who was ejected, not DeMarcus Cousins. The Redskins quarterback shared a photo of the article and made a joke about his fighting skills getting recognition.

Glad to see my fighting skills are getting proper recognition. @boogiecousins #cousins pic.twitter.com/2qQYtTm9gp

Earlier this year, Redskins president Bruce Allen repeatedly referred to Kirk Cousins as “Kurt” when addressing the media. A few years ago, Cousins was referred to as Kurt on a promotional item. At least this time the correct spelling of his name was used. Jim Mora is still providing us with incredible television clips, more than 15 years after his legendary “playoffs” rant.

Mora, a former head coach of the New Orleans Saints, is now providing commentary for WDSU after Saints games. He was on an outdoor set with two others to provide some analysis following the Saints’ loss to the Vikings on Monday night when the great clip occurred.

Matters began with studio anchor Scott Walker declaring that Mora grows impatient the later it gets into the evening. Fletcher Mackel, the host on site, repeated that statement to Mora. Thinking he was off-air, Mora responded that Walker was “full of s—.”

This video is priceless, but beware that it contains a curse word.

The reaction from Mackel, who saw Mora about to drop the S-bomb, was perfect. His recovery was pretty solid too.

I can’t stop laughing at this video. It’s fantastic. And because you can’t think of Mora without recalling his legendary rant, here’s that video. ESPN reporter Sergio Dipp is about to become internet famous, but it’s not for a good reason.

The sideline reporter was part of ESPN’s broadcast team for the Monday night game between the Chargers and Broncos and was asked to deliver a report on new Broncos head coach Vance Joseph.

The results were, ugh, shaky to say the least:

There's no way this guy actually works for ESPN pic.twitter.com/6u0xEu4xPL

Dipp is a reporter for ESPN in Latin America and lives in Mexico, so he was not reporting in his native language. He looked like he either had a report prepared on a teleprompter and there was a technical error, or he had his speech memorized and blanked when he went live.

Being on the big stage and reporting in English probably was a big challenge for Dipp. The good news is the 29-year-old seems to be staying positive: The Twitter account for the “NBA on TNT” seemingly predicted the winner of Monday’s Game 7 between the Celtics and Wizards.

Prior to tipoff, the header photo of the social medial account for Turner’s NBA broadcast showed Kawhi Leonard and Stephen Curry on the left side as representatives of the two teams in this year’s Western Conference Finals. On the right were Isaiah Thomas and LeBron James. The Cavaliers have, of course, advanced to the Eastern Conference Finals. Thomas and Celtics still had a game to win. Here’s a screenshot.

Not surprisingly, a couple of people joked about conspiracy theories.

@NBAonTNT thanks for letting us know Boston is winning tonight & ppl ask how is sports rigged lol pic.twitter.com/DaIPvMg97U

If the Celtics go on to win, it will largely go unremembered. However, if the Wizards come away with a victory, there will surely be more than few of their fans who will let TNT know they were a bit hasty with their graphic. 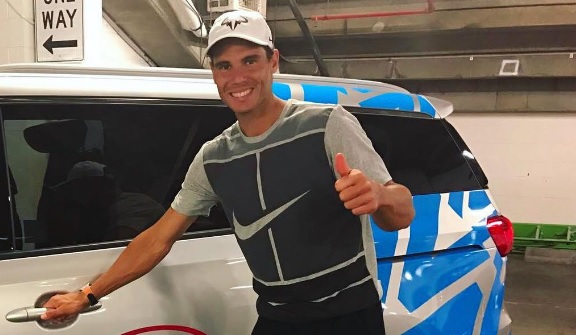 A reporter at Sunday’s Miami Open final was apparently watching a different match from everybody else.

After Rafael Nadal lost the Miami Open title to rival Roger Federer 6-3, 6-4, he was congratulated by a journalist on the victory in his post-match press conference. Upon Nadal pointing out that he had actually lost, the reporter then attempted to save face, leading to this awkward exchange.

The rivalry between Nadal and Federer, arguably the greatest one in the history of tennis, has gained new life in 2017. Federer has now won their last four consecutive meetings, but Nadal still leads the all-time head-to-head 23-14. And if you ask some people, the margin separating the two is even greater.