Les Miles says he was ‘beyond’ fighting for LSU job, wants to coach again

Fired LSU coach Les Miles was very conciliatory toward the school in his first interview since being relieved of his duties on Sunday.

Miles said he was “beyond” fighting for his job, comfortable with anything LSU did if they felt it helped the program, and does hope to coach again.

“It was beyond fighting,” Miles told Monday’s Dan Patrick Show, via Chris Vannini of CoachingSearch.com. “The enjoyment of being here, the enjoyment of the community, the experiences my family’s had, it was too important for me to fight over. It’s history, it’s what we are. If they see a change makes the Tigers better, then I’m for them.”

Miles couldn’t — or wouldn’t — say if he was being undermined.

“If it was there, I was beyond it,” Miles said. “I enjoyed going in my room, seeing the young men I recruited and coached. I was fortunate to be with a great coaching staff that worked hard. If there was an undercurrent, it did not exist in that building. That building was about football and football opinion and the best way to win. It was a cultural divide. What goes on outside the building just didn’t matter.”

Miles did say that coaching is the only thing he knows.

“I don’t golf,” Miles said. “I play no tennis. I enjoy shooting the gun, but I don’t point it at animals. I play cards not very well. What I have done for probably 12-14 hours a day for the last number of years is coach football. I would have a difficult time not being involved in the game or being a coach.”

Miles was fired on Sunday after a 2-2 start to the season. It’s probably only a matter of time before he finds another job elsewhere.

Les Miles and Cam Cameron have been fired by LSU, a day after losing to Auburn 18-13 in controversial fashion to fall to 2-2 this season, the Baton Rouge Advocate’s Ross Dellenger reports.

Dellenger reported Sunday that LSU officials were meeting to conduct an extensive review of the program that is generally reserved for after the season. He said both the jobs of Miles and Cameron were in jeopardy in particular. Apparently the officials decided to make significant changes by firing both their head coach and offensive coordinator.

More news: #LSU D-line coach Ed Orgeron is being offered the position as interim coach for the Tigers.

Miles’ job was under review last season, and reports had said the program planned to fire the coach following a three-game losing streak that left LSU 7-3. But the Tigers rallied with a huge win over Texas A&M, and LSU’s president decided not to fire Miles. The team then won its bowl game to finish 9-3.

But after a 2-2 start this season — LSU’s worst ever start under Miles — officials decided it was time for a change. The offense’s relatively poor performance throughout the season likely led to the dissatisfaction with Cameron. LSU was held to 14 points by Wisconsin, 13 by Auburn, and only scored 23 against Mississippi State.

Coaches are held to the highest standard in Baton Rouge, where LSU is expected to compete for national championships. There will likely be no shortage of teams interested in hiring Miles.

Making Orgeron the interim head coach also makes plenty of sense. Not only does he have experience as a head coach in the SEC during his time at Ole Miss, but he also was a successful interim head coach at a major program in 2013 when he led USC to a 6-2 record after Lane Kiffin was fired.

The job statuses for LSU head coach Les Miles and offensive coordinator Cam Cameron are in question once again.

The Baton Rouge Advocate reports that LSU officials are meeting to discuss and review both Miles and Cameron following the Tigers’ loss to Auburn on Saturday that made LSU 2-2. The Advocate describes the situation as an “extensive evaluation,” similar to the kind done after the season.

The Advocate says that “changes to the staff — particularly regarding head coach Les Miles and offensive coordinator Cam Cameron — could be coming as early as Monday.”

Miles has been the head coach at LSU for 12 seasons, and his job is once again in question. There were reports saying he would be fired last fall, but the plan was nixed after LSU pulled off a dramatic win over Texas A&M. LSU was in the middle of a 3-game losing streak when plans to fire the coach were discussed. The Tigers won their final two games to finish 9-3.

This year’s 2-2 start is the program’s worst ever under Miles. Saturday’s loss to Auburn involved this controversial ending. LSU head coach Les Miles has a lot to review after an upset loss to the Wisconsin Badgers to open up the season, and one of them will be the late hit by offensive lineman Josh Boutte.

After safety D’Cot Dixon intercepted LSU quarterback Brandon Harris late in the fourth quarter to seal the 16-14 win for Wisconsin on Saturday, he found himself on the receiving end of a vicious cheap shot from Boutte (video here).

Miles said after the game that he would review the hit, hinting that it was possible Boutte didn’t know the play was over.

“I grabbed him right away,” Miles said, per Adam Rittenberg of ESPN. “I’m going to have to see the film, but he’s an offensive lineman in protection, and what happens downfield sometimes is you’re protecting beyond the play. … Again, I’ll have to check this, but it’s very logical that he did not even know [Dixon] had gone down and was just running [with the ball].

“He’s not a malicious guy,” Miles continued. “I just can’t imagine that he saw him go down and then made it back.”

Boutte was ejected immediately for the hit, which definitely looked unambiguously callous. Hopefully after reviewing the film, Miles will be able to determine if further disciplinary action is warranted for the senior lineman. 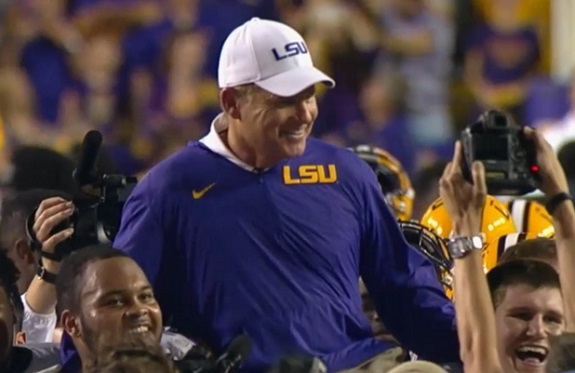 The LSU Tigers face the Wisconsin Badgers at Lambeau Field on Saturday, so naturally, a few LSU players thought they’d have some fun with it if they scored a touchdown.

Several players, including punt returner and cornerback Tre’Davious White, said they’d perform the Lambeau Leap if they scored a touchdown in the game, no matter what the punishment was for doing it. By NCAA rule, it would be a 15-yard penalty, though the players expected coach Les Miles to have something else in mind.

“Definitely. I’m pretty much just open to whatever punishment that’s going to come my way Monday,” White said, via Ross Dellenger of the Advocate. “It’s going to be bad, but I feel like, it’s just a dream of mine. Whatever Coach Miles has in store, I’m pretty sure it’s going to be some bad things. I’m ready to do it. It’s my last year. I want to make some memorable moments.”

So, coach, what would you do to them if they did?

Les: "I promise you, that if anybody does the Lambeau Leap, they will end up with their thumb out looking for a ride home."

Alrighty then. That’s pretty persuasive. Perhaps Les is just aware of the hazards of the Lambeau Leap. Frankly, at this point, I hope White scores a touchdown on Saturday now. I want to see how committed he is to defying his coach.

Les Miles surprised by family with trip to NBA Finals None other than LSU coach Les Miles made a surprising appearance on TV for Game 6 of the NBA Finals in Cleveland on Thursday.

Miles said his family surprised him with a trip to the game to watch the Cavs and Warriors.

Les Miles in Cleveland: "I was directed by my kids, pack your bags and let's go… I'm so fired up to be here." #LSU pic.twitter.com/oBKSMvg8hG

ESPN even put Miles on their pregame show, but the coach was not the most eloquent:

LSU tight end Dillon Gordon was released from the hospital Tuesday after being treated for stab wounds he suffered during an altercation at a bar early that morning. As a result, Tigers head coach Les Miles has banned his players from the bar scene.

Gordon, a three-year starter, sent a couple of tweets shortly after the frightening scene took place.

Thank you Lord it just wasnt my time

As we were reminded when TCU star quarterback Trevone Boykin got into a fight last week (video here), nothing good ever happens at a bar or nightclub after midnight. Miles has the right idea, but we highly doubt he can get all of his players to respect the new policy.