With the preseason officially over and cut-down day having come and gone, the NFL’s regular season is arriving. That also means fantasy football season is upon us.

Various outlets have published their top 25, 50, 75 and 100 fantasy players lists, but what about players from each individual team? Who is the best fantasy option from each organization? Well, look no further.

Here are the best fantasy players from all 32 NFL teams.

A versatile do-it-all running back, David Johnson may be not only the best fantasy player on the Arizona Cardinals, but arguably all of football. He had over 2,100 yards from scrimmage and 20 touchdowns a season ago, and there’s little reason to believe his workload will decrease in 2017. His 80 catches as a running back make him an utter monster in PPR leagues.

Was there a more obvious choice than Julio Jones for the Falcons? Arguably the best wide receiver in football, it’s a near lock that Jones will put up over 100 yards a game and have a few chances to score. Of course, he’s also entirely capable of putting together a season like 2015, when he had nearly 1,900 yards and eight touchdowns.

END_OF_DOCUMENT_TOKEN_TO_BE_REPLACED

ESPN apologizes for offending some with fantasy football auction ESPN apologized in a statement sent Tuesday for airing a fantasy football auction that some found to be offensive because of their feeling that it was too similar to a slave auction.

Teams in fantasy football leagues are often formed in one of two ways: via a draft system, where participants select players one at a time, or via an auction, where participants are given a “salary cap” and bid on players using their theoretical money. ESPN decided to air their version of an auction Monday, and that’s led to some backlash.

Shaun King, who is a leader in the Black Lives Matter movement, sent this tweet that included a video clip from the auction. He demanded an apology from ESPN.

Apologize now for doing a sketch where you auctioned a Black man off to the highest bidder. pic.twitter.com/D8SC1cjhBU

King demanded an apology and received one.

“Auction drafts are a common part of fantasy football, and ESPN’s segments replicated an auction draft with a diverse slate of top professional football players,” ESPN said in a statement to The Big Lead. “Without that context, we understand the optics could be portrayed as offensive, and we apologize.”

Though ESPN was being thoughtful and respectful in apologizing, many wonder whether that was even necessary. What ESPN was doing was portraying a live fantasy football auction, which is something football fans of all races participate in every single year. All NFL players — white and black alike — are eligible to be selected by fantasy football participants. Yes, even Tom Brady and Matt Ryan get auctioned off in similar fashion. King and other critics probably did not understand that context, leading to their criticism. Though with a white auctioneer and all white people doing the bidding on mostly black athletes, it’s understandable why many would feel offended.

Still, ESPN does not want to offend anyone, which is why they ultimately apologized. If they televise a similar segment in the future, they may want to consider changing the optics and execution of the bit. Kenneth Farrow and and Ronnie Hillman are set to get extra carries for the San Diego Chargers in Week 16 with starter Melvin Gordon ruled out.

Gordon has a hip and knee injury that kept him out of Week 15 and will also force him to miss this Saturday’s game at Cleveland.

Farrow saw the bulk of the carries against the Raiders last weekend, rushing 15 times for 39 yards and catching two passes. Hillman carried seven times for 34 yards. But Farrow fumbled twice — losing one — so you figure he might receive a slight demotion given the way the two performed.

Neither player is a great bet to see huge action this weekend, but Hillman might be the better play if you’re in your fantasy football finals. Dallas Cowboys rookie quarterback Dak Prescott is going to be thrust into a starting role much sooner than anyone expected. With news breaking on Saturday that Tony Romo has a broken bone in his back, the Cowboys are Prescott’s team indefinitely.

From a fantasy football standpoint, Prescott is as intriguing as they come. He has the ability to make plays with his legs and has looked terrific passing the ball in the preseason. Just look at his stats:

We all know preseason stats mean very little, but Prescott is one of those players who can post decent fantasy stats without even having a good “real life” game. In standard scoring leagues, he should be good for at least four or five points per week with scrambling alone. If Prescott adds a rushing score, that means he can grab you about 10 points without attempting a single pass.

Prescott needs to be owned in all formats. Initial reports are that Romo is expected to miss 6-10 weeks. The Cowboys’ schedule over the first 10 weeks is not insanely difficult. Christine Michael is, once again, a name fantasy football enthusiasts need to be watching.

I know, I know — you’ve heard this too many times before. Michael was the running back the Seattle Seahawks in the second round that was “just a Marshawn Lynch injury away from being a stud.” He then got traded to the Dallas Cowboys for the equivalent of a bag of footballs, and once again we bought into the hype. Whoops.

Michael has now made his way back to Seattle, and he has looked nothing shy of explosive during the preseason. With Lynch having retired and Thomas Rawls easing back from an ankle injury, Michael has arguably been the MVP of the preseason. He has 24 carries for 157 yards, which works out to a whopping 6.5 yards per carry. And on most of those runs, Michael has shown why the Seahawks felt he was worthy of such a high draft pick back in 2013.

Rawls isn’t going to be shipped off to sea simply because Michael has turned it on in the preseason. However, we still don’t know how rusty Rawls will be when he returns. We also don’t know if the Seahawks plan to lean heavily on one of the backs or use both, but Pete Carroll has showered Michael in praise for several weeks now.

With Michael’s fantasy draft stock rising, now is the time to grab him. We don’t blame you if you say “I’ve heard that before” and ignore the advice, but we’re giving it one more shot.

Todd Gurley thinks he should go No. 1 overall in your fantasy draft 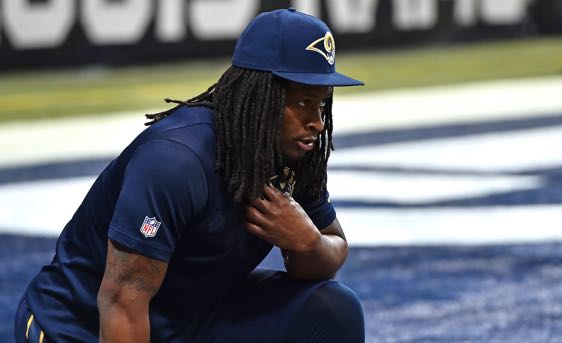 Todd Gurley is not lacking in the self-confidence department.

The Rams running back was asked where he should go in fantasy drafts in an NFL Network appearance, and he answered definitively.

“No. 1 overall for sure,” Gurley said, via Michael David Smith of ProFootballTalk.

Gurley did hedge a bit as he continued, conceding that Cam Newton and Antonio Brown also had a case.

“You maybe could choose Antonio Brown over me, but no one else. Maybe Cam. That’s it,” Gurley said.

At minimum, Le’Veon Bell and Adrian Peterson would have something to say about this, as would Michael Bennett. Still, Gurley has been working hard, dropping weight, and preparing himself for a big season. We’re not quite sold on him as a top overall pick in fantasy, though.