Patriots now have their own ‘Dough Your Job’ ice cream flavor

Bill Belichick has lived by the mantra “do your job” for much of his tenure as head coach of the New England Patriots, but the phrase has gained popularity in recent years after it became the official slogan of the team leading up to Super Bowl LI. And now, Belichick’s words have inspired an ice cream flavor.

Gifford’s Ice Cream in Maine released a flavor in advance of the 2019 season that is called “Dough Your Job.” Get it?

The new flavor is described by Gifford’s as featuring “chocolate caramel footballs and cookie dough (teaming) up on a heavy fudge striped field of vanilla ice cream.” It is available at Gillette Stadium and will be served at Gifford’s Ice Cream stands in Maine beginning on Friday.

“On any given Sunday, you can hear the Patriots legendary head coach and quarterback uttering these simple words, ‘Do Your Job’. It’s become a team saying, and it’s all about staying focused on hard work, preparation, and the attention to detail needed to win,” Gifford’s Vice President of Sales JC Gifford said in a statement, via News Center Maine. “We believe the same at Gifford’s.”

The Patriots are obviously on board with the clever naming of the ice cream, so at least Gifford’s won’t have to hear Rob Gronkowski call them out about using the slogan. The Erie Sea Wolves created a frenzy online with one of their concoctions on “Sugar Rush Night.”

The Sea Wolves, a Double-A affiliate of the Detroit Tigers, decided to serve some foods in cotton candy. The ice cream ball wrapped in cotton candy made sense:

What was more daring was their hot dog topped with Nerds where cotton candy was used as a bun.

It’s Sugar Rush night at UPMC Park! You can get a Smith’s hot dog with a cotton candy bun topped with nerds! pic.twitter.com/z9FhZBtXun

Now that’s how to tackle the sweet vs. savory battle with one item.

Would you try it?

Chick-fil-A will be in new Falcons stadium, still closed on Sundays

Seven of the Atlanta Falcons’ eight home games at their new stadium this season will be held on Sunday, which means one very important thing for fans at the Mercedes-Benz Stadium — there will be only one opportunity to eat Chick-fil-A during the regular season.

As ESPN’s Darren Rovell notes, there is a Chick-fil-A restaurant inside the NFL’s newest venue. Of course, all Chick-fil-A locations are closed on Sundays. The one inside the Mercedes-Benz Stadium will be no exception.

Zaxby's now the official chicken of the Falcons. That doesn't mean Chick Fil-A isn't in the new stadium. It is closed on Sundays, however. pic.twitter.com/TfCIa3rz5T

Falcons fans have only one chance to get their Chick-fil-A fix during the regular season, and that will be during a Thursday night game on Dec. 7. However, the team’s two preseason home games are on Saturday, Aug. 26 and Thursday, Aug. 31. If you’re planning to go to a Falcons game that doesn’t fall on one of those three dates, you had better start thinking about food options other than Chick-fil-A.

We know at least one NBA player who would be drooling outside the Chick-fil-A stand on Sundays. Don’t be surprised if that ends up happening with a handful of Falcons fans. Charcandrick West is a big Skittles fan, and the Kansas City Chiefs running back got a sweet gift from the candy company.

Skittles sent West a custom Skittles-dispensing bag that he can use when packing for road trips with the Chiefs.

West has been known for taking a Skittles bag with him on the road, but this one is different in that it includes a button you can press to dispense the candies.

West has scored eight touchdowns over the past two seasons for the Chiefs. He’ll likely be sharing carries with Spencer Ware and Kareem Hunt this season, as well as Skittles headlines with Marshawn Lynch.

Mariners sold out of toasted grasshoppers at Safeco Field

The Mariners have introduced a new item to snack on while watching a game at Safeco Field and (for at least one day) they couldn’t have too many of them.

When it comes to ballpark foods, teams appear to be trying to outdo each other at this point. There’s almost no limit to what you can find a stadiums across the country with some choices more extreme than others. At Safeco Field, you can munch on a well-seasoned insect.

For $4, you can get a bowl of toasted grasshoppers that have been tossed in chili lime salt. They will, obviously, not appeal to everyone. However, on Monday, enough people purchased them the concession stand selling them reportedly sold out.

Mariners broadcast reporting that the grilled grasshoppers have sold out.

A few fans took to Twitter and either posted photos or gave their impressions of the crunch snack.

So we tried the grasshoppers at safeco today. #WhereIRoot @Mariners pic.twitter.com/RNLoka8Zio

Eating grasshoppers like a boss after a fumble. #safecofield #grasshoppers @mariners #marinersopener

The chili lime salt might actually entice me to try a couple if given the opportunity. I’d just have to get over the whole, you know, grasshopper thing. 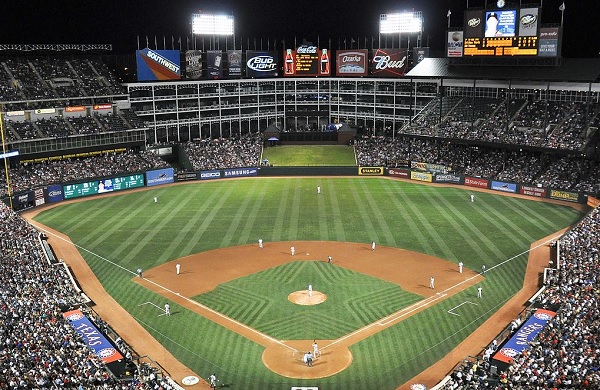 The Texas Rangers have developed a reputation for producing jaw-dropping, gut-busting, over-sized food items at their ballgames, and this season will be no different.

Actually, there will be something new this year that is worth a headline — their 2-foot long, $27 tamale hot dog.

GuideLive.com says the Rangers will be selling an “MVT” at games this year that will feature their 24-inch “Boomstick” hot dog inside of a tamale. The “Most Valuable Tamale” as it’s known is topped with chili, nacho cheese and sour cream.

First, the M.V.T. (Most Valuable Tamale). It's a 24" tamale filled with a hotdog and covered with nacho cheese.

If you’re planning on eating and ordering one of those, we recommend you bring an entire family and wear some pants with an elastic waistband.

Johnny Manziel got a money cake for his birthday Johnny Manziel turned 22 on Saturday and got a very appropriate customized birthday cake to celebrate the occasion.

Colossal Cupcakes in Cleveland posted a photo to their Facebook page showing off the custom cake they made for the Browns quarterback. As you can see, the cake features two huge sacks of money with coins and bills coming out. There are also coins, bills and a fake gold bar on the tray, too.

That cake seems to fit Manziel’s personality perfectly. All it was missing was Manziel doing the money hands celebration.

Do you think the dessert shop got the cake idea from this Floyd Mayweather birthday cake?