Prescott was asked Thursday about his name being in MVP conversations. He said he was more focused on winning games than the award, according to the Fort Worth Star-Telegram’s Clarence Hill Jr.

Dak Prescott on the MVP talk: The only thing I care about is wins. So if that means I’m the most winningest quarterback in the league, sure, I want it. But until it means that, I don’t care. It’s something cool, right? But I want to win games and that’s the most important thing.

Prescott has maintained a similar attitude when it comes to his contract talks. He has said he wants to earn his contract by winning the Super Bowl.

The Dallas Cowboys quarterback knows how things work: if he takes care of winning, then everything else — the money and awards — will come. This seems to be the theme among Cowboys players too.

The Dallas Cowboys are still in the process of trying to work out a long-term extension with Dak Prescott, and one of the greatest players in franchise history had a message for the team after Prescott’s monster performance on Sunday.

Prescott threw for a whopping 444 yards and three touchdowns in a 35-27 win over the Detroit Lions, and Dan Rogers of SB Nation pointed out that Dak is now averaging more yards per game than Troy Aikman, Roger Staubach, Tony Romo, or any other QB in Cowboys history ever did in a season. Aikman responded by telling Jerry Jones to “pay the man.”

I say pay the man https://t.co/A23uPXnROj

The NFL has obviously changed dramatically since Aikman and Staubach played, with rules catered more toward passing offenses. It’s hard to compare stats from different eras, but Prescott is once again proving this year that he is capable of winning as an NFL starter. Guys who have accomplished a lot less than him have been paid a lot more, so it’s only a matter of time before he cashes in.

The Cowboys say they are still “working hard” on signing Prescott to an extension, though a recent report indicated the QB could be headed for the franchise tag this offseason. That doesn’t mean a long-term agreement won’t be reached before the start of next season, however.

Prescott has completed 67.7 percent of his passes this season for 3,221 yards, 21 touchdowns and nine interceptions. He supposedly turned down a massive offer from the Cowboys prior to the season, though details about guaranteed money were unclear. There’s almost no chance the Cowboys let him leave, so it is only a matter of time before an extension is in place. Aikman’s endorsement can’t hurt. 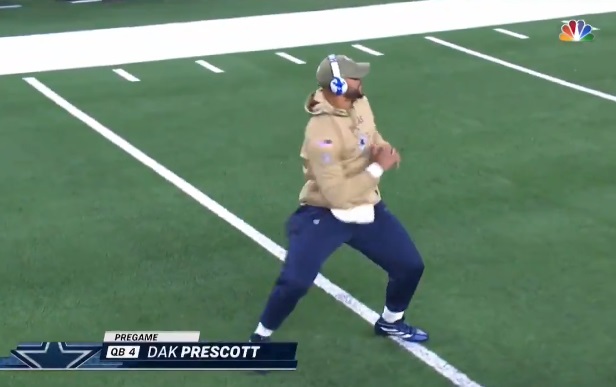 Elliott scored on a 17-yard touchdown catch from Prescott to put the Dallas Cowboys up 35-21 on the Lions in the fourth quarter. After scoring, Elliott did the Dak hip twist pregame routine.

Elliott had a rushing touchdown in the game in addition to his receiving touchdown. Prescott passed for 444 yards and three touchdowns in the 35-27 victory for the 6-4 squad.

Dak Prescott and the Dallas Cowboys seem unlikely to come to an agreement on a contract extension this late into the regular season, but that does not mean discussions have been tabled altogether.

Stephen Jones was asked a question about Colin Kaepernick’s upcoming workout during an appearance on 105.3 The Fan Friday, and the Cowboys executive vice president said the team will not be sending a representative largely because they are satisfied with their quarterback situation. Jones also said Dallas is focused on trying to sign Prescott to a long-term extension.

"It's our understanding is the tape will be put out for the rest of the league. We'll look at that. We're really happy with our quarterbacks and we're working hard to sign Dak." – Stephen Jones on Jerry saying they wouldn't have a rep at CK7 workout.

A recent report claimed Prescott is likely to be franchise tagged this offseason, but that does not necessarily mean he will have to play under a one-year deal in 2020. If the two sides have made progress toward a new contract by then, the franchise tag might only serve to give them more time to come to an agreement.

Prescott supposedly turned down a massive offer from the Cowboys prior to the season, though details about guaranteed money were unclear. There has been talk that he has not pushed for a new deal because of other revenue streams he has managed to generate, so perhaps he is comfortable putting the pressure on the team by letting things drag out.

After the way things unfolded with Ezekiel Elliott, it would be a surprise if Prescott and the Cowboys don’t come to an agreement during the offseason. Nick Bosa is a funny guy who enjoys messing around. That was evident on Monday night.

Prior to his San Francisco 49ers’ game against the Seattle Seahawks, Bosa decided to joke around by doing the Dak Prescott hip twist routine in pregame warmups.

Now here is Prescott doing it for comparison:

NBC showed video during “Sunday Night Football” of Dak going through his routine. People loved it and then gave it a whole bunch of funny remixes to different songs. Bosa clearly saw it too and decided to take his shot at it.

Between this and what he did with Baker Mayfield, Bosa enjoys having fun with quarterbacks.

A video of Dak Prescott moving his hips in a pregame warmup routine went viral on Sunday night, and it got hilarious remixes.

During the first half of the Dallas Cowboys-Minnesota Vikings game, the NBC crew showed video of Prescott’s warmup routine. The routine is awesome to watch.

That video was fun to watch, but nothing compared to when folks on Twitter started adding music remixes to it.

The real winner was this remix that paired the clip with Shakira’s “Hips Don’t Lie.”

And a good competitor was the remix set to Elvis Crespo’s “Suavemente.”

Here was Dak dancing to Huey Lewis and the News’ “Hip to be Square.”

Hip To Be Square pic.twitter.com/w1EVzVNwS6

Here are a few others:

Got to be worth an extra few million, Jerry.

Or a role in Pulp Fiction 2 pic.twitter.com/aDLGxFxE96

Bless the internet for making things so much more fun. If you want to see more, just check out the #DakDancesToAnything hashtag.

Cris Collinsworth made mistake with mention of Dak Prescott’s mom Cris Collinsworth probably regrets an error he made while calling the Dallas Cowboys-Minnesota Vikings game on Sunday night.

Dak Prescott had thrown a touchdown pass to Michael Gallup in the second quarter, which led Collinsworth and Al Michaels to talk about the Cowboys quarterback’s contract situation.

According to Michaels, Prescott told the two that he was not at all worried about his contract situation and would “play for free.” That’s when Collinsworth made a mistake.

“He got his mom a house. He’s happy. He said his sponsorships pay for a few other things,” Collinsworth said.

Though the remarks from Collinsworth were flattering, they’re incorrect.

Prescott’s mother died of colon cancer in November 2013 when Dak was in college at Mississippi State. Prescott wasn’t drafted by the Cowboys until 2016.

Perhaps Collinsworth got the detail wrong or misspoke. Maybe Prescott bought a house for another family member. The announcer did not mean anything personal or negative, but that was a bad mistake to make, and something he would probably want to correct.

UPDATE: During the third quarter, Collinsworth corrected his error and said that Prescott was close with his mom and wanted to buy her a house.