The Seahawks fell to 3-7 with Sunday’s 23-13 loss to the Arizona Cardinals. The offense struggled, and the Seahawks were unable to take advantage of an Arizona team missing both Kyler Murray and DeAndre Hopkins.

Carroll was unable to hide his frustration during his postgame press conference. Roughly seven minutes into it, he pronounced himself done and walked away from the podium while a reporter was in the middle of a question.

Pete Carroll leaving the press conference…
He did return to finish the question pic.twitter.com/Jeuz2jrqMP

To his credit, Carroll returned a few minutes later and apologized for walking off. He admitted that it was the most frustrated he’s ever been since taking over the Seattle job.

After cutting off his postgame presser early, Pete Carroll later returned and answered more questions. He said he’s not used to having to handle this much losing and called it the most frustrated he’s been. pic.twitter.com/9PajEkZVq1

Carroll isn’t alone in his frustration, with one of his star players attributing his recent on-field outburst to the team’s struggles. It’s understandable to a degree, as the Seahawks haven’t had a losing season since they went 7-9 in 2011. That was Carroll’s second season at the helm. The organization is used to success, but it’s not happening this season.

Jets player not impressed with Tua Tagovailoa despite big game

Tua Tagovailoa had one of his best NFL performances on Sunday. That didn’t impress at least one opponent, though.

John Franklin-Myers said Tua beat the #Jets by throwing up “prayers” and “sometimes prayers are answered.”

This doesn’t really check out. Tagovailoa went an efficient 27-of-33 for 273 yards with two touchdowns and an interception. That’s a lot of answered prayers.

Tagovailoa has received plenty of criticism during his career, and some of it has come from opponents. His decision-making and his reading of defenses has come under scrutiny. It’s often been quite valid. Here, though, it sounds like sour grapes from a team that made Tagovailoa look very good.

It probably doesn’t help that Franklin-Myers, who has four sacks on the year, only collected one QB hit on Sunday.

Cam Newton officially reclaimed his job as starting quarterback of the Carolina Panthers on Sunday, and he apparently has an opportunity to keep it for quite some time.

The Panthers signed Newton last week with the intention of having him start. According to Jay Glazer of FOX Sports, Newton could enter the 2022 in the same role with the team is all goes well.

“It all depends on how Cam plays. I know the Panthers look at it and don’t think there are a lot of great options out there with the college prospects,” Glazer said prior to Sunday’s NFL action. “If they can’t land one of the big fish (via trade or signing) in the offseason, they would hope that a guy like Cam Newton can step up and be their future.”

Obviously, the Panthers do not envision bringing Sam Darnold back next season. They can say they signed Newton because of Darnold’s shoulder injury, but Darnold was likely headed to the bench regardless.

Newton played well in a tough 27-21 loss to Washington on Sunday. He made plays with his arm and legs, passing for 189 yards and two touchdowns and rushing for 46 and another score. The former MVP even ramped up his TD celebration game.

It’s far too early to say if Newton can come close to regaining his old form. There’s a reason only one team offered him a chance to start last year and it took an injury to get another opportunity this year. But if he’s healthy and continues to play well, the Panthers clearly have interest in making him the face of the franchise again.

Baker Mayfield had telling reaction to win over Lions

The Cleveland Browns won on Sunday, but that did not appear to be enough to satisfy Baker Mayfield.

Mayfield had one of the worst games of his career on Sunday, going 15-for-29 for just 176 yards, one touchdown, and two interceptions. One of the interceptions, a major overthrow of Jarvis Landry, was particularly ugly.

Baker Mayfield with the top 5 worst INT of the year pic.twitter.com/XhG1eVWxi5

According to Mary Kay Cabot of Cleveland.com, Mayfield was the first player off the field following Cleveland’s 13-10 win. He didn’t acknowledge any teammates, opponents, or fans, and simply went down the tunnel to the locker room looking angry. Most notably, he declined to speak to the media for the first time in his NFL career.

One thing we know for sure is that Mayfield is playing hurt. The quarterback hurt his knee last week, and is also battling a bruised heel and a left shoulder injury. That may have something to do with the poor performances.

However, there’s more at play here. Mayfield has been vocal about the Browns being Super Bowl contenders, but they’re just 6-5 after an unconvincing three-point home win over the NFL’s worst team. Mayfield is also struggling in a year that was supposed to see him clinch a new long-term contract. That all might be on his mind at this point. The NFL has maintained that it will not back down from its emphasis on penalizing taunting this season, and yet another player was flagged on Sunday for calling the league’s bluff.

Kansas City Chiefs running back Clyde Edwards-Helaire, who returned after missing several games with a knee injury, was called for taunting when he scored a touchdown in the first half of his team’s game against the Dallas Cowboys. The flag was thrown after he pointed at a defender.

They called taunting on Clyde Edwards-Helaire for pointing at the defender while he scored a touchdown smh pic.twitter.com/k7YPanOHM0

While the taunting penalties have gotten ridiculous, players and teams should know better at this point. We’ve seen players flagged for a lot less than what Edwards-Helaire did. The rule isn’t changing this season, even if one of the people who helped implement it believes it has gone too far.

Green Bay Packers quarterback Aaron Rodgers is dealing with a toe injury, and it sounds like the injury is not insignificant.

Rodgers was limited in practice during the week due to his toe issue. One report said the injury was “concerning” and that the quarterback would likely have to deal with it for the rest of the season.

Rodgers added a bit of context to the injury after Sunday’s loss to Minnesota. He characterized the injury as worse than turf toe. He said he was trying to gut it out until the team’s Week 13 bye. He also added that he got stepped on in the first half, which made the issue worse.

Rodgers on his Zoom presser said his toe injury is “a little worse than turf toe.”

“Gonna have to get to the bye and hope I can get some some healing over the bye week.”

Got it stepped and went in early at halftime to get checked. Probably won’t practice much again this week. pic.twitter.com/kBXJ1Fhjno

Rodgers confirmed that the toe was the reason he went to the locker room a bit early for halftime in a move that caused a bit of uproar at the time. The injury didn’t seem to impact the quarterback’s play, as he went 23-for-33 for 385 yards and four touchdowns.

The Packers have now lost two of three, though one of those defeats came with Rodgers sidelined. Still, this is a somewhat concerning update, and suggests that the toe is really bothering Rodgers. If it lingers, it will be another problem Green Bay has to work around for the rest of the year. Dallas Cowboys running back Ezekiel Elliott appeared to hurt his ankle early on in Sunday’s game against the Kansas City City.

Elliott’s right leg got caught awkwardly underneath him as he was being tackled out of bounds in the first quarter. You can see the play below:

Ezekiel Elliott took a shot to his right ankle on this play pic.twitter.com/D5drLdZim6

Elliott briefly went into the medical tent before returning to the sideline. He was walking with a limp, but the extent of the injury was not immediately clear.

It’s hard to tell if Elliott rolled his ankle or the defender just banged into it. The latter would likely be the better scenario.

Elliott was replaced by Tony Pollard on the Cowboys’ next drive, though they often use Pollard to give Elliott a breather, anyway. The Green Bay Packers may have caught a huge break on their go-ahead touchdown against the Minnesota Vikings on Sunday.

Rodgers and Davante Adams connected on an 18-yard touchdown pass in the fourth quarter to tie the score at 23-23, and the extra point gave Green Bay a 24-23 lead. There was some confusion on the play, as Rodgers signaled for a timeout just before he received the snap. Keep a close eye on the quarterback in the video below:

Rodgers definitely wanted a timeout. However, it’s difficult to tell if he made the signal before the ball was in play. The timeout signal and the snap seemed to happen simultaneously. Either way, the fact that Rodgers signaled for a timeout might help explain why Adams was wide open.

The Packers benefitted from a badly botched call late last season, but it’s hard to say if the same happened on Sunday. It looked like a bang-bang pay that simply went in Green Bay’s favor.

The Vikings ended up winning on a last-second field goal. Had the result gone the other way, they likely would have been furious about the timeout play. 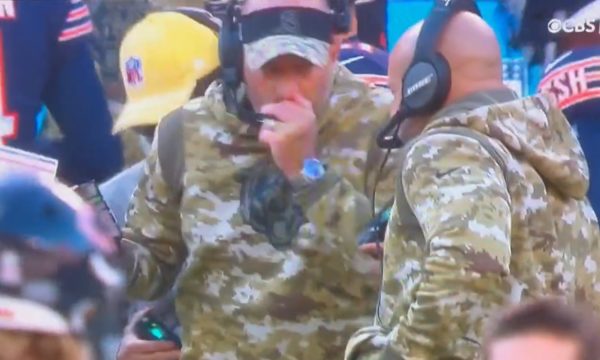 Chicago Bears coach Matt Nagy had a sideline incident on Sunday that works as a microcosm of his entire season.

With 12:30 left in the fourth quarter, the Bears faced a big decision on 4th and 1 at their own 49-yard line. The Bears led by one against the Baltimore Ravens, and had the choice to play for field position or try to sustain the drive.

There was one major issue — Nagy seemed to be having major problems with his headset. The Bears coach seemed to be growing increasingly agitated as the sideline technician tried to fix the issue.

The Bears initially sent the punt team on the field, then called timeout. After that, they sent the offense on the field and called a bizarre shotgun wildcat play that failed to pick up the first down.

Nagy has found himself under increasing pressure as the Bears struggle, and has also been scrutinized for his handling of rookie quarterback Justin Fields. This is only going to fuel a sense of incompetence, even if it’s not completely Nagy’s fault in this instance.