The San Francisco 49ers have a vital need to keep George Kittle happy, and it sounds like there’s a bit of a problem with that right now.

According to Mike Silver of NFL Network, there is a “significant disconnect” in contract talks between the 49ers and Kittle’s camp. While the Niners are willing to reset the tight end market for Kittle, the player’s camp views him as more than simply a tight end and wants to see him paid accordingly.

There's a disconnect between @gkittle46 and the @49ers and if that doesn't change soon, I wonder whether he might consider an extreme measure. @nflnetwork @wyche89 pic.twitter.com/pjuWn2mvZC

Silver even wonders if Kittle would consider opting out of the NFL season if the 49ers do not give him what he wants, though that is more speculative than anything else.

As it stands, Kittle would play the 2020 season on a $2.1 million salary. That’s nowhere near fair market value for a player with back-to-back 1,000-yard seasons who can dominate a game like few others can.

Cleveland’s Austin Hooper is currently the highest-paid tight end in the NFL, and is due to make $11.5 million this year. The 49ers are clearly willing to beat that for Kittle, but he has a different position in mind in terms of setting his market value that would get him paid much more.

Antonio Brown has been highly critical of the NFL for dragging out its investigation into his conduct violations, but the star receiver finally received an answer from the league on Friday.

Brown has been suspended for eight games for violating the NFL’s personal conduct policy. Robert Klemko of the Washington Post was the first to report the news.

Antonio Brown (free agent) is being suspended for 8 games for violation fo the NFL personal conduct policy, beginning whenever he signs, per league source.

While Klemko said Brown will be suspended beginning when he signs with a team, the 8-game ban will reportedly begin in Week 1 even if Brown remains a free agent.

Antonio Brown’s suspension is effective Sept. 5, whether he’s on a roster or not. It runs through Week 8 of the regular season or his team’s 8th game, if he signs during the suspension.

Several teams have expressed interest in Brown, but the belief has been that no team would sign him until the league announced the severity of his punishment. We will now see if that is truly the case.

Lamar Jackson said this week that he is hoping the Baltimore Ravens sign Brown, and head coach John Harbaugh did not rule it out. Harbaugh referenced the NFL’s investigation and said he did not think Brown was currently available.

Patriots’ Patrick Chung explains why he opted out of season Patrick Chung is one of the most well-known players to opt out of the 2020 NFL season, and the New England Patriots defensive back was willing to explain how he came to the decision.

In an appearance on “CBS This Morning” this week, Chung said there were a number of personal factors that led to him opting out. Among them are that he has a son with asthma and another child on the way.

Pat Chung on CBS This Morning explained why he's opted out. "I have a girlfriend that's pregnant, a baby girl coming soon, my son has a little asthma, my dad is 75 years old. I just felt like this was the best decision for my family to keep everyone safe…"

Chung’s reasons are similar to those a lot of his peers have given. His teammate, Patriots starting linebacker Dont’a Hightower, just had a baby in July.

The Patriots have had multiple starters opt out due to the coronavirus, and they are obviously beginning a new era without Tom Brady. They’re going to face more challenges than most teams this season, though Cam Newton seems to be ready to tackle them.

Chung was drafted by the Patriots with the 34th overall pick in 2009. He spent the first four years of his career in New England before playing for the Philadelphia Eagles for one season in 2013, and he has been back with the Patriots since. The safety has been a Bill Belichick favorite despite having some off-field issues. ESPN is reportedly going back to a three-man crew for “Monday Night Football” this season, and the trio is expected to be led by Steve Levy.

James Andrew Miller reported on Friday that ESPN has decided on Levy as its play-by-play man with Louis Riddick and Brian Griese to serve as color commentators.

As Miller noted, ESPN will reportedly have its top college football duo of Chris Fowler and Kirk Herbsreit call the second “Monday Night Football” game in Week 1. The network holds two games for the opening week of the season. Things could also still change if the college football season is postponed or canceled.

ESPN has been focused solely on internal candidates since a slew of former NFL quarterbacks turned down their massive offers. There has been talk that Herbstreit could call both college and “Monday Night Football” games, but that seems unlikely. In the rare event that the college season is canceled or moved to the spring, Herbstreit and Fowler may serve as fill-ins for “Monday Night Football” just for this season. 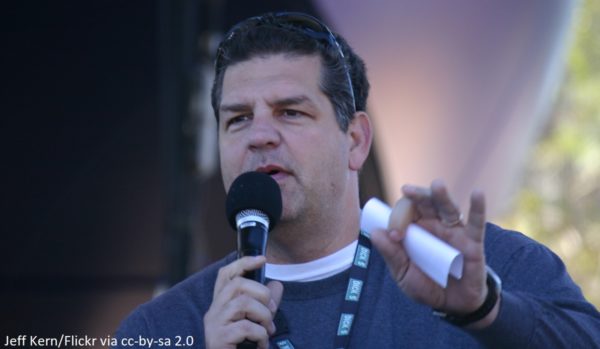 Before Mike Golic became one half of the famous “Mike & Mike” show two decades ago, he wanted a job working in the broadcast booth for ESPN’s “Monday Night Football.” He and his family wanted it so badly, in fact, that they made campaign badges and everything.

With Golic hosting his last radio show on Friday, one of his colleagues at ESPN shared a photo on Twitter of what looked like a political campaign button featuring Golic’s face. The badge was from 2000 and said “I Like Mike!” on it. Golic’s wife, Christine, revealed that the family had the buttons made up to campaign for Mike to land a job with “Monday Night Football.”

This was the campaign button for when Mike wanted to do MNF. The campaign ultimately lacked the funding to get it done. #ThankYouGolic https://t.co/kJvrWu8tFI

Golic never became a part of the “MNF” crew, but he went on to co-host a successful radio show with Mike Greenberg from 2000-2017. He has worked alongside Trey Wingo since, and the two hosted the final installment of their show on Friday morning.

Golic, 57, remains under contract with ESPN. He opened up about the cancellation of his show this week and indicated he was unhappy with the way it was handled.