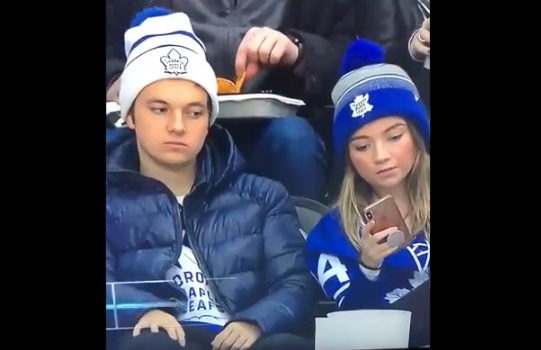 The Toronto Maple Leafs fan from the video that went viral over the weekend has posted the infamous selfie on Instagram.

Saturday’s Leafs-Pittsburgh Penguins game was featured on “Hockey Night in Canada,” and a clip from the game went viral that showed a boy and girl taking a selfie together. The video was great because of the boy’s facial expressions — he looked like he couldn’t be bothered with the pictures and was being forced to take them with his girlfriend. He quickly went from forced smile to frown in seconds.

Leafs fans before & after.

The two people from the clip are actually brother and sister, not boyfriend and girlfriend, and the boy says his frown was because his favorite team was down 6-1.

Patricia Bourikas ended up posting the infamous selfie on Instagram on Monday, and it quickly blew up. She received over 7,000 likes on the picture — more than any of her other photos had ever received by far.

Patricia is 20 and her brother Kosta is 17. Kosta seems to be having fun with it all. In his Instagram bio, he refers to himself as “Frown Guy” and his Instagram photo is his frown from that clip.

The two told Global News in Canada that they are huge Leafs fans. Kosta says he was upset because the team was down 6-1.

“I’m just trying to watch the game. Obviously I’m depressed, she’s like, ‘Hey, how about a picture?’ She puts her phone to me. I give her a fake smile. I give her what she wants, so I just smiled and then I got back to how I was really feeling,” Kosta told Global News.

The two said their phones blew up quickly after being shown on TV and that they were receiving messages on social media from people who recognized them. They’ve been interviewed, received coverage on the net, and will be the subject of memes for the foreseeable future. They’re great sports about it.

A hilarious video of two Toronto Maple Leafs fans taking a selfie at a game went viral on Sunday.

The Leafs lost at Pittsburgh 6-1 on Saturday. The game was televised on “Hockey Night in Canada,” and one clip during the broadcast showed these two fans taking a selfie. The change in facial expressions from the man in the photo was epic:

Could that guy have been putting on any more of a fake smile for the camera? He looked like every guy sick of taking a million selfies with his girl only to have her say just one was good.

The explanations for his demeanor actually make more sense — the two are said to be brother and sister, not boyfriend and girlfriend — and his team was down 6-1. Who would actually be happy taking a selfie with their team down 6-1? Still, that clip was fantastic.

UPDATE: The Leafs fan from the video has posted the famous selfie on Instagram – here it is! Longtime Canadian hockey pundit Don Cherry was fired Monday over comments he made about immigrant Canadians.

Cherry, a fixture on weekly “Hockey Night in Canada” telecasts since 1981, lost his job after criticizing immigrants for not paying proper respect to Canadian military veterans by wearing poppies customarily sold by veterans groups in honor of Remembrance Day, which is celebrated in Canada on November 11 and similar to Veterans Day in the U.S.

“You know, I was talking to a veteran, and I said, I’m not going to run the (annual Remembrance Day montage) anymore, because what’s the sense? I live in Mississauga, nobody wears, very few people wear a poppy,” said Cherry. “Downtown Toronto, forget it, downtown Toronto, nobody wears a poppy. And I’m not going to, and he says, wait a minute. How about running it for the people that buy them?

“Now you go to the small cities and you know, the rows on rows, you people love — that come here, whatever it is — you love our way of life, you love our milk and honey, at least you can pay a couple bucks for a poppy or something like that. These guys paid for your way of life that you enjoy in Canada, these guys paid the biggest price. Anyhow, I’m going to run it for you great people and good Canadians that bought a poppy.”

Outcry was swift, and there was widespread anger at Cherry’s use of the phrase “you people” to describe immigrants. Sportsnet, Cherry’s employer, apologized for the broadcaster’s comments on Sunday.

“Following further discussions with Don Cherry after Saturday night’s broadcast, it has been decided it is the right time for him to immediately step down,” Sportsnet President Bart Yabsley said in a statement released on Twitter Monday afternoon. “During the broadcast, he made divisive remarks that do not represent our values or what we stand for.

“Don is synonymous with hockey and has played an integral role in growing the game over the past 40 years. We would like to thank Don for his contributions to hockey and sports broadcasting in Canada.”

The NHL also issued a statement criticizing Cherry. Cherry himself refused to apologize for his comments when reached by the Toronto Sun.

Cherry has always been outspoken. He has often been critical of European-born NHL players, especially compared to their Canadian counterparts. He has also been critical of those seeking to tamp down on fighting in hockey, and was widely criticized for a 2013 comment in which he suggested female reporters should not be welcome in men’s locker rooms. This was the last straw for his employers, and he will no longer be appearing on Canadian NHL telecasts. Colorado Avalanche forward Mikko Rantanen went down with what appeared to be a leg or ankle injury during the second period of his team’s game against the St. Louis Blues on Monday night.

Rantanen was skating when his left foot got turned in the wrong direction, causing him to go down sliding on the ice.

Rantanen left the game after the injury. He had an assist prior to exiting.

The 22-year-old entered with 11 points in eight games this season. He had 87 points last season and 84 the season before.