Roenick joked about “going to bed” with both his wife and Tappen, adding that while it would never happen, it “would really be good.” That earned him a suspension, and Tappen called her colleague’s comments “unacceptable” in a brief statement released by NBC Sports.

Statement from @KathrynTappen on @Jeremy_Roenick's comments (provided by NBC Sports PR): “While Jeremy and I continue to be good friends, what he said was unacceptable, especially among workplace colleagues. I do not condone his comments.” https://t.co/fiYp10rK9t

Tappen has been put in a deeply unpleasant situation publicly, and she shouldn’t really have to say this. The fallout for Roenick, meanwhile, is just beginning. NBC has only said that his suspension is indefinite, and they have not gone any further in stating if and when they’ll actually put a timetable on it.

NBC Sports came down hard on NHL analyst Jeremy Roenick for comments he made about his coworkers on a podcast.

Roenick received an indefinite suspension without pay for sexual comments he made about NBC colleagues Kathryn Tappen and Patrick Sharp in an appearance on Barstool Sports’ “Spittin’ Chiclets” podcast. Roenick discussed going on vacation with both his wife and Tappen, adding that he joked with a hotel guest about their “situation.”

“I play it off like we’re going to bed together every night, the three of us,” Roenick said, via TMZ Sports. He added that while such a situation would never happen, “if it really came to fruition, that would really be good.”

He later praised Tappen as “one of the most professional sports personalities I know.”

Roenick also called Sharp “beautiful” and said “I’d have to think about it if he asked me … I wouldn’t say no right away.”

The NHL star-turned-analyst has never been shy about sharing controversial opinions. NBC probably likes his style when it comes to giving opinions about what happens on the ice, but they clearly weren’t expecting him to speak about his coworkers that way, jokingly or not.

The four major Boston-area sports teams have enjoyed tremendous success over the past two decades, but it was not always championship trophies and MVP awards for the Patriots, Red Sox, Celtics and Bruins. If you dig up an old newspaper from the turn of the century, you might find what many would consider a surreal reminder of that.

Throwback Thursday: The cover of the Patriot Ledger, 19 years ago today in Boston.

As Rovell notes, things have changed quite dramatically since then. The teams have combined for 12 championships, with the Patriots winning six of those. The cartoon featured a bubble coming from Belichick that said, “I should have stayed with the Jets,” but something tells us the future Hall of Famer is happy with his decision (even if he is dealing with another annoying controvery).

At the time the paper was published, the Red Sox — still in a historic World Series drought — had missed the playoffs. The Bruins and Celtics were also on their way to missing the postseason, with the Celtics not having been to the playoffs in five years. The Patriots went 5-11 that season before winning their first title the following year.

Talk about your all-time turnarounds. Calgary Flames coach Bill Peters is being investigated by the team and the NHL after one of his former players accused him of using racial slurs, and more disturbing allegations against him came to light on Tuesday.

On Monday night, former NHL player Akim Aliu accused Peters of using a racial slur against him several years ago when Peters was coaching him with the American Hockey League’s Rockford IceHogs. The Nigerian-born Aliu said Peters had him demoted to the ECHL when he challenged the coach.

Not very surprising the things we’re hearing about Babcock. Apple doesn’t fall far from the Tree, same sort of deal with his protege in YYC. Dropped the N bomb several times towards me in the dressing room in my rookie year because he didn’t like my choice of music. First one to

admit I rebelled against him. Wouldn’t you? And instead of remedying the situation, he wrote a letter to John McDonough and Stan Bowman to have me sent down to the ECHL. 20 year old on pace for 20 goals in his first pro year with zero PP/PK time was off to a great start in his

Aliu told TSN’s Frank Seravalli on Tuesday that Peters walked in before a morning pregame skate and told him he is sick of him playing that “n—– s—” music, referring to the hip-hop Aliu had chosen. Two other former Rockford players, Simon Pepin and Peter MacArthur, have corroborated Aliu’s story. Aliu said Peters later called him into his office to discuss the matter but did not apologize, instead using the racist language again to express his displeasure in the music choice.

Later on Tuesday, former NHL player Michal Jordan accused Peters of physically assaulting him and other players when Peters was coaching the Carolina Hurricanes.

1) Never wish anything bad to the person but you get what you deserve Bill.After years making it to the NHL had experience with the worst coach ever by far.Kicking me and punching other player to the head during the game…

2) then pretending like nothing happened…couldnt believe my eyes what can happen in the best league.. happy that i dont have to go thrue that stuff on daily basics anymore.

Jordan told Seravalli he never came forward out of fear of negatively impacting his career, but he said he was not the only player who had a physical altercation with Peters in Carolina. Another former Hurricane said he was hit in the head by Peters on the bench during a game, but the player chose to remain anonymous.

Former #Canes player Michal Jordan confirms to #TSN that there were "multiple" physical altercations between coach Bill Peters and players in Carolina.

"He kicked me pretty hard in the back during a game," Jordan said. "Even the trainers and the other guys saw it."

Jordan: "I was at that point in my career, like I just got there, so I couldn't say anything. I didn't want them to think I was crying. Me and my agent, we kept it secret. Now other guys are speaking out, so I felt like I could."

Multiple sources also confirmed to #TSN the other physical altercation alleged in Jordan's tweet: Peters also struck a #Canes defenceman in the head on the bench during a game.

To this point, that #Canes player has wished to remain anonymous. It's his story to tell, until then.

Flames general manager Brad Treliving confirmed that the Flames are investigating the claims, and the NHL has called the alleged behavior “repugnant and unacceptable.”

Peters coached the Hurricanes from 2014 until he resigned in 2018. He was then hired by the Flames last year and led the team to their first division title in 13 years in his first season. 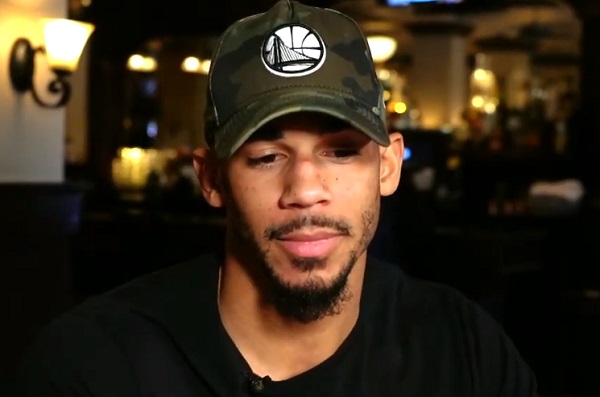 The Toronto Maple Leafs fan from the video that went viral over the weekend has posted the infamous selfie on Instagram.

Saturday’s Leafs-Pittsburgh Penguins game was featured on “Hockey Night in Canada,” and a clip from the game went viral that showed a boy and girl taking a selfie together. The video was great because of the boy’s facial expressions — he looked like he couldn’t be bothered with the pictures and was being forced to take them with his girlfriend. He quickly went from forced smile to frown in seconds.

Leafs fans before & after.

The two people from the clip are actually brother and sister, not boyfriend and girlfriend, and the boy says his frown was because his favorite team was down 6-1.

Patricia Bourikas ended up posting the infamous selfie on Instagram on Monday, and it quickly blew up. She received over 7,000 likes on the picture — more than any of her other photos had ever received by far.

Patricia is 20 and her brother Kosta is 17. Kosta seems to be having fun with it all. In his Instagram bio, he refers to himself as “Frown Guy” and his Instagram photo is his frown from that clip.

The two told Global News in Canada that they are huge Leafs fans. Kosta says he was upset because the team was down 6-1.

“I’m just trying to watch the game. Obviously I’m depressed, she’s like, ‘Hey, how about a picture?’ She puts her phone to me. I give her a fake smile. I give her what she wants, so I just smiled and then I got back to how I was really feeling,” Kosta told Global News.

The two said their phones blew up quickly after being shown on TV and that they were receiving messages on social media from people who recognized them. They’ve been interviewed, received coverage on the net, and will be the subject of memes for the foreseeable future. They’re great sports about it.