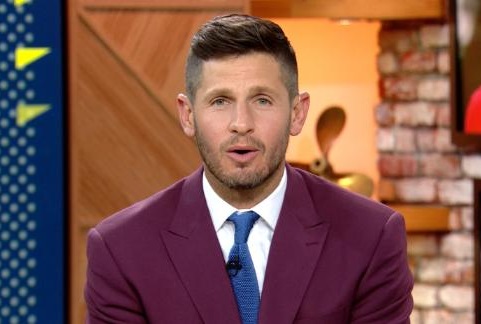 Dan Orlovsky has made a name for himself as a football analyst both for ESPN and on social media, and he’s receiving interest from NFL teams in possible coaching jobs.

ESPN’s Adam Schefter reported on Sunday that Orlovsky has received interest from multiple NFL teams this season. Orlovsky hasn’t taken any of these coaching opportunities and remains an analyst. Schefter says it would have to be a perfect opportunity for Orlovsky to leave his job providing analysis for coaching.

Orlovsky regularly provides in-depth insight, breaking down videos on social media and often highlighting things many others would miss. In December, Orlovsky shared a video explaining how and why Tom Brady was lacking faith in his wide receivers. The types of things he notices and the way he discusses them has many believing he would do well as a coach.

Orlovsky, 36, is from Connecticut and played college ball at UConn. He played in the NFL for six teams and was last with the Rams in 2017 before retiring and joining ESPN.

Report: Spotify in talks to purchase The Ringer The Ringer could soon be under new ownership.

According to Anne Steele and Benjamin Mullin of the Wall Street Journal, Spotify is currently in talks to acquire Bill Simmons’ digital media network. Talks are said to be in the very early stages.

Spotify’s interest in The Ringer is based less on its website and more on its podcast network. According to the report, The Ringer’s podcasts generated over $15 million in 2018 and are downloaded more than 100 million times per month. This would allow Spotify to broaden its interests from streaming music to podcasts and other potentially exclusive content.

Simmons would certainly follow The Ringer to Spotify. The longtime sports media personality founded the site in 2016 after his previous effort, Grantland, was shut down by ESPN. He was reportedly making plenty of money from The Ringer’s initial investors, so this move may help him financially as well. ESPN is reportedly looking into making some changes in the “Sunday Night Baseball” booth.

According to Andrew Marchand of the New York Post, the network has considered replacing commentator Jessica Mendoza, with ESPN wanting to build the booth around Alex Rodriguez.

To that end, ESPN has reportedly had discussions with YES Network analyst David Cone about a possible role with the network. There is some belief that the booth would be better with a pitcher in it, and they liked how things turned out when Rodriguez and Cone worked together on YES in a brief stint in 2019.

ESPN is still said to be high on Mendoza, and if she is moved off the broadcast, she is still expected to have a big role on the network. There remains a chance that the network could leave the booth as it is. There have been issues managing Mendoza’s dual role as a broadcaster and as a special assistant to Mets GM Brodie Van Wagenen, but executives tried to make it clear that Mendoza’s ill-advised social media posts about Mike Fiers have no impact on her future.

Mendoza’s front office role has caused some minor hindrances during her broadcasting career. Ultimately, though, this move seems to be about A-Rod, who ESPN clearly views as a star.

LSU seemed destined to wind up at the top of the college football world early on in the 2019 season, so the Tigers should have had plenty of time to prepare for how they might carry themselves if they captured a national title. As far as Kirk Herbstreit is concerned, they did not handle it well.

Herbstreit was critical of LSU during his podcast this week, saying he could not help but feel like many Tigers players acted like 2019 was the “finish line” and they are not concerned about the future of the program.

“I will say this: as much as we’re celebrating this team, I wasn’t a real fan of the postgame stuff, the OBJ stuff with the money,” Herbstreit said, as transcribed by Clint Buckley of 247Sports.com. “The way they handled themselves at times. If it’s just about 2019, great. But this is about staying power, right? This isn’t the finish line of their program. Don’t they wanna win in 2020, don’t they wanna win in 2021? I almost feel like it’s all the chips in, we made it, that’s it and forget everything else.”

Herbstreit said he believes that attitude is what separates LSU’s 2019 team from programs like Clemson and Alabama, who are at or near the top of the college football ranks every year. The ESPN analyst and former Ohio State quarterback also took issue with Joe Burrow confirming that Odell Beckham Jr. was handing out real money. Burrow’s message was essentially that he is heading to the NFL and no longer needs NCAA eligibility, so he is not concerned about potential infractions.

“Burrow’s comment about, ‘I’m not a student-athlete anymore, yeah it was real money.’ If you care about the program, do you really say that?” Herbstreit asked.

Personally, I didn’t feel that there were a lot of differences between the way LSU celebrated and the way past champions have celebrated. The majority of the negative attention was brought on by Beckham handing out money and getting in trouble with police for his locker room antics, so that shouldn’t be pinned on LSU players. The 2019 season will make LSU more appealing to top recruits, and we highly doubt those recruits will focus on the way Tigers players handled themselves after dominating Clemson. Jessica Mendoza shared an opinion on the Houston Astros’ sign stealing scandal that many felt was biased considering the role she has with the New York Mets. After hearing the backlash, the ESPN analyst tried to clarify her stance.

Mendoza appeared on ESPN’s Golic and Wingo Thursday morning, and she said she finds it “hard to swallow” that former Astros pitcher Mike Fiers spoke to The Athletic about what was going on in Houston. That led to people ridiculing Mendoza for shaming Fiers when what the Astros were doing clearly crossed the line, and she later issued a statement on Twitter to backtrack a bit.

Mendoza is an adviser to Mets general manager Brodie Van Wagenen, and Carlos Beltran was one of the people who was heavily implicated by MLB in the Astros’ scheme. Some felt Mendoza was placing the blame on Fiers for ratting Houston out because she was trying to defend her team’s new manager, who has since stepped down. In response to that, Mendoza said she wants to “make it extra clear that my adviser role with the team does not shape my opinion in any way, shape or form on this matter.”

The Athletic had other sources and had probably been working on the Astros story well before Fiers decided to attach his name to his remarks. Criticizing him instead of the Astros seems absurd. ESPN reporter Edward Aschoff passed away on Christmas Eve after battling what doctors initially thought was pneumonia, but it turns out that was not the only illness he had at the time of his death.

On Wednesday, Aschoff’s fiancee Katy Berteau wrote a series of tweets on Edward’s account to provide more information about his sudden passing. Berteau said doctors received the final results from a biopsy that was taken of Aschoff’s lungs, and the tests showed the 34-year-old had Stage 4 non-Hodgkins’ lymphoma in his lungs. Doctors told Berteau that form of cancer is difficult to detect until it is very advanced.

(2/9) After his passing, the hospital received the final results from his lung biopsy. Unbeknownst to us, Edward had stage 4, non-Hodgkin’s lymphoma in his lungs. This is an aggressive type of cancer that is usually undetectable until it is very advanced. pic.twitter.com/kuPHwrAXuz

(3/9) Both pneumonia and non-Hodgkins lymphoma can trigger HLH in the body and that is seemingly what happened with Edward. All of this combined is what led to his very rapid decline those last few days, and ultimately his passing. pic.twitter.com/blXaF6UJC3

Berteau says she takes comfort knowing Aschoff did not have to suffer through a long disease when his death was “inevitable.” She also said she provided the update so people could know that “something way bigger than pneumonia took him down.”

I also wanted to provide this update because he would have wanted everyone to know that something way bigger than pneumonia took him down. pic.twitter.com/BAHX3bj5Eu

Aschoff began working with ESPN as an SEC reporter in 2011. He graduated from the University of Florida in 2008 and seemed to be ascending with the network at the time he died. There will be a hint of emotion in the press box Monday night as the College Football Playoff honors two late journalists.

ESPN’s Edward Aschoff died of pneumonia on Dec. 24. New Orleans-area sports reporter Carley McCord died in a plane crash on Dec. 28. Both were honored with seats in the press box during Monday night’s title game.

Two seats in the Superdome press box tonight have been reserved in memory of Carley McCord and Edward Aschoff.

Both were widely respected and adored sports journalists. pic.twitter.com/FaMW3572zx

Aschoff was a college football reporter for ESPN who was on his way up at the network. He passed away on his 34th birthday.

McCord’s death came as a shock to the LSU family. ESPN aired a feature that demonstrated just what she meant to the program.

As their team plays for a title, the LSU family also mourns.

While sad to think about their deaths, it’s a very nice touch to honor these journalists at a game they both would have been deeply invested in.