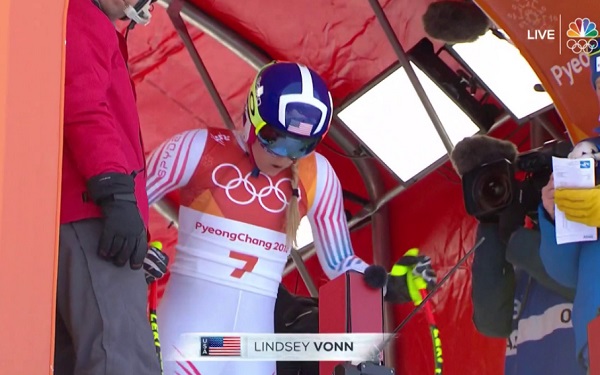 Lindsey Vonn may not have won gold in what she expects will be her last downhill ever at the Olympics, but she still managed to be complimentary about her opponents.

Vonn praised her friend, Sofia Goggia, for putting together a top time in the event.

“I think I skied really well and I think Sofia is untouchable today,” Vonn said in an interview with NBC’s Heather Cox after her run.

Italy’s Goggia finished with a time of 1:39.22. Vonn was 0.47 seconds behind, which placed her second for a while until she was surpassed by Norway’s Ragnhild Mowinckel.

Vonn said at the time that she was optimistic her time would stick so she could claim silver. Even though she knew she would not be winning gold, Vonn was proud of how she did.

“I left it all on the mountain like I said I would and I’m proud of my performance.”

The downhill is the event in which Vonn had won her only Olympic gold medal — it came in Vancouver in 2010. The International Olympic Committee has attempted to crack down on unauthorized marketing that uses the Olympics to advertise a product, but it appears Pizza Hut’s Korea division has found a loophole.

A screenshot from Yi Whan-woo of the Korea Times shows a sales promotion that has been used by Pizza Hut Korea during the Olympics, and it features the phrase “Pyengchang together.” Pyengchang, of course, is awfully similar to PyeongChang (the site of the Olympics), but it is simply a phrase that means “inflation” or “expansion.” The promotion is offering customers a cheese topping and a bottle of Pepsi for free when they buy premium pizzas.

The IOC has asked several South Korean companies to refrain from ambush marketing if they are not paying to be official sponsors of the Olympics, which Pizza Hut Korea is not. However, an official from the company insists the “Pyengchang together” phrase has nothing to do with the 2018 Winter Games.

As of now, it does not sound like Olympic officials plan to take action.

“Using pyengchang is seen as no big deal as long as Olympic symbols and emblems are not used without authorization,” a PyeongChang Organizing Committee official said.

Unlike the guy who tried to sneak into the Olympic Village using fake documentation, it seems like Pizza Hut Korea may be onto something. The Russian government is still intent on attacking the credibility of the man who exposed the country’s elaborate doping program, and Brooklyn Nets owner Mikhail Prokhorov is reportedly one of the people who is providing financial backing.

According to a report from Tariq Panja of the New York Times, Prokhorov is helping fund a defamation lawsuit against Dr. Grigory Rodchenkov, whose uncovering of Russia’s state-sponsored doping program resulted in the country being banned from the 2018 Winter Olympics in PyeongChang. The suit has been filed by three Russian biathletes — Olga Zaytseva, Yana Romanova and Olga Vilukhina — who are seeking $10 million in damages after they had their silver medals from the 2014 Sochi Olympics stripped.

Prokhorov was the leader of the Russian biathlon federation in Sochi, which likely explains his interest in the lawsuit.

Panja notes that the suit has little chance of succeeding, and Rodchenkov’s attorney says he is not concerned about it.

“This claim has zero chance of surviving a motion to dismiss,” James Walden told the new York Times. “It is as credible as the rest of Russia’s lies. So I will gladly defend it.”

Rodchenkov is currently living in the United States under federal protection. He recently issued an apology for his role in the doping program, which involved drug-testing bottles being tampered with to cover up performance-enhancing drug use.

“Clean urine was collected over a long period, since 2013,” Rodchenkov said. “It was stored at Sochi by the FSB. Athletes, their coaches or someone in their entourage was responsible for getting the DCFs [doping control forms] to my office. It ran like clockwork.”

Prokhorov has owned the Nets since 2010, and we have heard reports that he is considering selling the team. Swiss free skier Joel Gisler suffered a nasty fall during his run in the men’s halpipe qualifications at the Winter Olympics on Tuesday.

What a terrible crash in ski half pipe qualifying from #SUI Joel Gisler.

A fall from over 20ft in the air folks

Luckily he seemed alright after getting on his feet and walking off the course on his own #FreestyleSkiing #PyeongChang2018 pic.twitter.com/FnZ6GLaX4G

Gisler was down writhing around in the snow but was able to sit up. He was seen breathing heavy afterwards and received some medical attention. The 23-year-old was eventually able to get on his feet and was helped down the pipe.