The Maloof brothers are the bettors behind the $880,000 wager placed on Floyd Mayweather Jr. for his fight with Conor McGregor on Aug. 26, the brothers revealed.

The photo from a printed $880,000 betting slip circulated on social media a few days ago, leaving behind many questions about its legitimacy and who had placed the bet. The slip also had an incorrect payout figure that was due to a computer glitch.

The brothers (Joe, Gavin and Phil), who formerly owned the Sacramento Kings and Palms hotel in Las Vegas, put $880,000 down on Mayweather at the South Point sports book, as LV Sports Biz first reported. They stand to profit $160,000 if they win and say they will donate the proceeds to charity.

Gavin told the Review-Journal why they felt comfortable placing the wager.

“I live down the street from Floyd and I’ve known him for a lot of years. He’s a good friend of mine,” Gavin Maloof told the Review-Journal. “Conor McGregor’s great and all the respect in the world to Dana White and the UFC. But it’s very difficult to transplant an MMA fighter to boxing.”

Many sports books are pleased to have money come in on Mayweather. There were so many McGregor fans who flooded the books that the odds went down, leaving the books hoping for a Mayweather win to avoid losing. Long bullish regarding the prospect of legalizing sports gambling in the United States, NBA commissioner Adam Silver thinks it will happen sooner rather than later.

Silver said Wednesday that he expects sports betting to be legalized within a few years, saying it would provide “enormous additional engagement” for fans.

NBA commish Silver: People want to bet throughout the game…It results in enormous additional engagement with the fans.

NBA commish Silver on gambling: "My sense is the law will change in the next few years in the United States."

The other major pro sports leagues are going to be less bullish on this, but Silver has been leading the charge for years. Putting both an NFL and NHL team in Las Vegas is indicative of the evolving view on sports gambling, and will probably prove to be a valuable trial run.

Fights — especially fights that take place in Las Vegas — and gambling go hand in hand. It was expected that the upcoming crossover bout between Floyd Mayweather, the boxing legend, and Conor McGregor, the UFC’s golden boy, would draw quite a betting pool.

According to Kevin Bradley, the manager of online sportsbook Bovada, the amount of wagers placed on Mayweather-McGregor could surpass even the most optimistic of predictions. Bradley is confident this will be the biggest sporting event of the year.

“We knew this fight would be big, potentially even bigger than the Super Bowl, but now we are almost certain it will be,” Bradley told Yahoo! Sports. “The recent trash talking and promotional tour is only encouraging bets and at this rate we cannot even imagine how much we will take on it.”

So, how much money was wagered on the Super Bowl? Estimates place that figure at $4.7 billion — with a B.

An estimated $4.7 billion will be bet on Super Bowl LI in the US alone, says the American Gaming Association, 97% of it illegally. pic.twitter.com/GqxG26KQYX

Yes — it’s plausible that the Mayweather-McGregor fight could draw more than $5 billion in wagers.

Mayweather, naturally, is the heavy favorite, but fans have placed many bets on McGregor because of the odds placed against him.

“One thing is for sure though, we will need Mayweather huge,” Bradley said. “A McGregor early round KO as he promised would be a potential disaster, and is partly a reason we are giving a great price on Mayweather at the moment.”

McGregor is currently a 4-to-1 underdog, per Bovada. The fight will take place Aug. 26.

The betting odds for the Floyd Mayweather-Conor McGregor will be an interesting side story to the major fight, as is usually the case for huge fights.

Because the fight will be taking place in a boxing ring under boxing rules, Mayweather is a heavy favorite. He has opened as a favorite of anywhere from -900 to -1100. That means you would have to wager $11 to win $1 if you think Floyd will win.

Apparently at least one big bet has come in on Floyd.

But many other bets are coming in on McGregor, who could pay off in a big way as an underdog.

As of Tuesday afternoon @LVSuperBook, 92 percent of bets that had been placed were on underdog Conor McGregor to defeat Floyd Mayweather.

The fight, which will take place on Aug. 26 in Las Vegas, will be McGregor’s first professional boxing contest. Mayweather is 49-0 in boxing and one of the greatest boxers ever. Mayweather is a huge favorite for a very good reason. Most people who follow basketball will predict the Golden State Warriors to beat the San Antonio Spurs in the Western Conference Finals, but the extent to which they’re favorites is still shocking.

The Warriors opened as a 10 to 10.5-point favorite over the Spurs in Game 1 of their upcoming series based on a look at a few different sportsbooks. That’s a pretty wide margin for what’s supposed to be the two top teams in the conference.

Golden State Warriors favored by 10.5 points over the San Antonio Spurs in Game #1 of the Western Conference Finals! #dubnation pic.twitter.com/wahGqvgNSP

What’s even more startling is how large of a favorite the Warriors are to win the series. 5Dimes sportsbook has the Warriors as a -1000 favorite, meaning you would have to wager $100 on them to win $10.

Vegas not expecting a competitive Western Conference Finals in any way, shape for form. Series line via 5Dimes:
Warriors -1000
Spurs +650

Westgate Las Vegas has the Warriors as an even greater favorite. They have Golden State as -1600 odds, which means you’d have to wager $160 that they win the series in order to profit $10. Bookmaker.eu lists the Warriors as -1050 for the series.

Those odds are similar to what you’d see when Floyd Mayweather fights one of his inept opponents. It’s safe to say NBA fans are expecting a third straight trip to the Finals for the Warriors. The Memphis Grizzlies covered the spread in their game against the New York Knicks in pretty incredible fashion.

The Grizzlies were up 98-88 against the Knicks on Friday night with 19 seconds left. They had the ball just past halfcourt with Wade Baldwin IV dribbling out the clock. Then with a second left and players walking off the court, Baldwin decided to launch a 3-pointer. Naturally, the ball went in.

No one is mad this time? pic.twitter.com/m2dX69RSpH

That made the score 101-88, which was the final. The Grizzlies were favored by 12.5 points in the game, so the three ensured they covered the spread by a half-point.

Not only did the late, seemingly meaningless three cover the spread, but it also created some bad blood.

Courtney Lee on Wade Baldwin's last second shot:
"We will see him next year…if he gets in the game. He may be in the D-League next year"

That sounds an awful lot like another complaint we heard last week. Do you think Baldwin had any idea that his last-second heavy would create so many ripple effects? 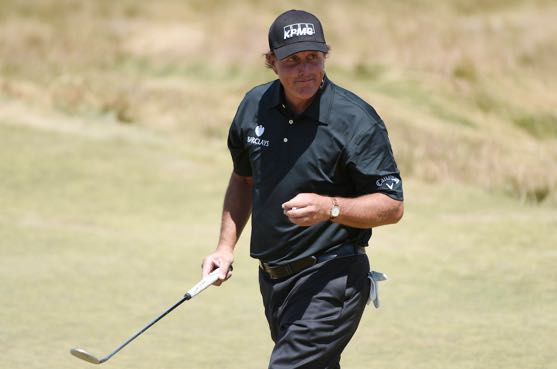 Phil Mickelson avoided being charged for insider trading for acting on a stock tip in 2012, but the case has revealed another interesting note about his gambling habit.

Mickelson has long had a reputation for being a huge gambler, which is sort of how he ended up in the situation. It was revealed in court on Thursday that Lefty owed gambling pro Billy Walters nearly $2 million for a gambling debt.

Walters received a stock tip, passed it along to Mickelson, who used it to make nearly a million dollars. A few months later he paid off a $1.95 million debut to Walters.

Mickelson was investigated but not charged by the SEC for his trade. He did pay back the money he made in his transactions, plus interest. A prosecutor in the case said Mickelson owed similar debts to Walters in the past.

Mickelson has also been linked to money laundering for a sports gambling ring.

The Oklahoma State Cowboys drained a three-pointer at the buzzer Friday that was utterly meaningless when it came to the result, but quite the opposite in Vegas.

Michigan led Oklahoma State 92-88 as time ran out in the first round game, but the Cowboys’ Jawun Evans drained a three at the buzzer. His team still lost, but the point spread had Michigan favored by 2.5 — meaning the shot meant a backdoor cover for Oklahoma State.

It was no small thing, too, as the shot had a major impact.

@mesave31 Good for the sports book. Michigan was one of the biggest public plays of the 1st round

Hey, maybe the bookies are starting to recover from that awful run they had in January. We can probably expect a lot of points to be scored in Super Bowl 51.

In their first two games this postseason, the Patriots scored 34 and 36 points. The Falcons have put up a combined 80 points in their two playoff wins. With two high-powered offenses set to meet in Houston for the Super Bowl, the expected point total by odds makers is already the largest in Super Bowl history.

Initially the total was 58 points, but was later raised to 59.

During the regular season, the Falcons led the NFL in scoring at 33.8 points per game and the Patriots were third at 27.6. Combine that with what both teams have done so far this post and it’s not hard to see why Vegas is expecting numerous points. It’s worth noting the Patriots’ defense did allow the fewest points per game (15.6) this season, although it will likely take their best effort of the season to keep the Falcons in that range.

A bad week for the sportsbooks got even worse after Sunday’s NFL action.

Thanks to upset victories Sunday by the Green Bay Packers and Pittsburgh Steelers, Las Vegas bookies reported huge losses, with William Hill reporting the worst day in the company’s five-year history in Nevada, according to ESPN’s David Perdum.

With bettors backing the two winning underdogs, the losses for bookies were enormous.

“Seemed like a blue-collar betting day with public parlaying, teasing and pounding money lines on Packers and Steelers,” said Bill Sattler, the director of specialty games for Caesars Entertainment. “We salvaged the under in [the] late game, but another solid week for the public.”

Others made it sound even worse.

It caps off a nightmare of a week for the sportsbooks, who suffered enormously on Monday’s National Championship Game as well. They’ll be holding their breath for more forgiving NFL results next weekend.