Fan agrees to pay $4,000 for date with Genie Bouchard Genie Bouchard has been open about her dating life many times in the past, and that transparency appears to have landed the tennis star a date and a hefty donation to charity made on her behalf.

Bouchard joined media personality Allie LaForce on an Instagram live feed to benefit charity on Saturday night. LaForce and her husband, Houston Astros pitcher Joe Smith, have partnered with Project Frontline to provide meals to healthcare workers involved in the fight against coronavirus. Bouchard recently revealed on social media that she has been spending a lot of time alone during the quarantine and is single, which led to a discussion about her dating life.

When a fan named Bob began commenting on the Instagram live feed multiple times that he loves Bouchard, he eventually got the attention of both Bouchard and LaForce. As James Matthey of news.com.au recapped, Bob eventually FaceTimed with the ladies and Bouchard called it “refreshing” that he hit on her face-to-face rather than just behind a keyboard. Bob later sent Bouchard a DM asking her to “Netflix and chill,” and Bouchard agreed. Then came the negotiations.

It was later determined that Bob is comedian Bob Menery, who has more than 2.5 million followers on Instagram. Menery ended up offering Bouchard $500 to go on a date with him, but she said that was not enough and noted that $3,000 would feed a staff at a hospital. Menery then said he’d kick in an extra $1,000 if Bouchard would order food in a British accent on the date.

“Why are you doing this to me, Bob?” Bouchard said. “You’re guilting me … so I feel I have to say yes because it’s for charity, but I’m also highly uncomfortable with that.

“I’m going to say yes but I have no skill whatsoever in imitating accents.”

The two eventually settled on $1,600 for a FaceTime date or $4,000 for an in-person meeting. It’s unclear if the date will actually take place with the coronavirus pandemic still forcing most of the country to remain at home, but the terms of the deal are in place.

If you remember, Bouchard had to go on a date with a fan after she lost a bet when the Patriots pulled off an impossible comeback against the Falcons in the Super Bowl. She’s been a part of this type of arrangement before, and it seems like she and Menery could get some nice publicity out the latest.

Wimbledon may be postponed or canceled due to coronavirus pandemic There may be more major casualties to the sporting schedule due to the coronavirus pandemic.

The All England Lawn Tennis & Croquet Club announced in a statement Wednesday that it is actively considering postponing or outright canceling Wimbledon, which is scheduled to begin June 29. The AELTC has ruled out playing the tournament without spectators, and admits that postponement may be difficult due to the necessity of maintaining the grass surface.

Wimbledon's organizers say they are considering both cancellation & postponement, acknowledging that postponement because of grass's characteristics, will be tough to manage. Playing without fans has been ruled out. Emergency meeting next week with decision possible pic.twitter.com/Mktqa3P2PY

The French Open has already postponed its tournament until late September, but as a clay court tournament, concerns about the playing surface are less significant than they would be at Wimbledon. The UK is currently on a national lockdown to slow the spread of the virus, and it’s hard to envision things will be normal enough for this tournament to take place as scheduled. Alexander Zverev is standing by his promise to donate the entire $4 million in prize money if he wins the Australian Open.

Zverev, who is seeded seventh, beat Stan Wawrinka 1-6, 6-3, 6-4, 6-2 in the quarterfinals of the major on Wednesday in Australia to advance to the semifinals. That means the 22-year-old German is two wins away from his first career grand slam title. That also means Zverev is two wins away from making a huge donation.

After his first-round win over Marco Cecchinato, Zverev said in his post-match interview that he would donate $10,000 per win to Australian bushfire relief. Zverev added that if he won the entire tournament, he would donate all the prize money.

Fast forward to Wednesday in Australia, and Zverev beat Wawrinka. The youngster was asked by John McEnroe whether he would stick by his promise to donate the full $4.12 million purse, and Zverev said yes.

“Easy to say in the first round, right? Yes, it is still true. I hope I can make it happen. I made the people of Australia a promise, I will keep that promise, if it happens,” said Zverev. “I’m not a money-driven person. My parents always told me you should achieve things with money that help others. 4 million Australian dollars would be nice, it would be very, very nice — I could maybe buy myself a few cars or something — but there’s people that actually need it for their homes, for rebuilding houses, wildlife, for rebuilding the life that they once knew, so it’s much more important that they get that money.”

Here was Zverev’s original promise after his win in the first round:

And here are more extensive comments from Zverev regarding his promise:

Alexander Zverev probably isn't winning the Australian Open, but you have to like his perspective on privilege as he promises to donate the check if he does win. Printing in full here pic.twitter.com/CMxQ3A0JyP 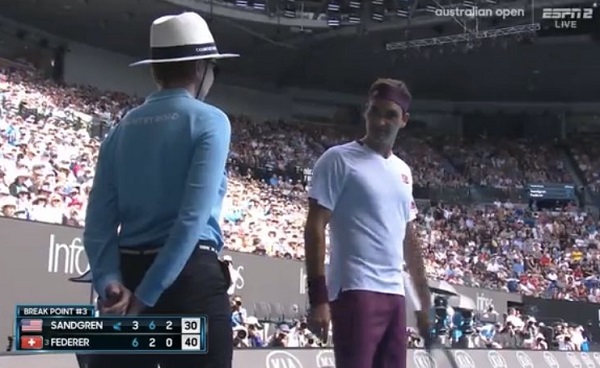 Serena Williams lost in the third round of the Australian Open on Friday in Melbourne for her earliest exit at the grand slam since 2006, but that wasn’t even the most surprising part about the defeat. What’s most surprising is the opponent to whom Serena lost.

Williams was defeated by Wang Qiang 6-4, 6-7 (2), 7-5. The shocking part of the defeat is that Williams defeated Qiang only four months earlier at the US Open in absolutely dominating fashion.

Williams steamrolled Qiang 6-1, 6-0 in 44 minutes at the US Open quarterfinals. Qiang only won 15 points in the entire match.

After the match, Qiang focused on how she was unable to match Serena’s power.

Wang Qiang at the US Open open after winning one game against Serena: pic.twitter.com/Tbh865B42r

To go from such an embarrassing loss to a win four months later shows great character and growth by Qiang.

Williams, 38, remains stuck on 23 grand slam singles titles. Her last grand slam win came at the Aussie Open in 2017 when she was pregnant. Serena has reached four finals since then but lost in all four.