An oddly-timed fart noise made it onto CBS’ telecast of the Steelers-Broncos on Sunday. The moment in question occurred after some kids representing youth football were honored on the field in Denver.

That’s where something slipped:

What is this sound pic.twitter.com/Da6u9muFsB

Was it a cameraman responsible for the sound? Phil Simms? One of the kids? Or did Jim Tomsula somehow sneak his way into the broadcast booth? Nothing can be ruled out!

Steve Harvey undid almost all of the great work from his career with one of the bigger blunders in recent TV history.

Poor Miss Colombia for having to go through that, and congratulations to Miss Philippines.

Of course, why would you put “first” runner-up if the person finished second? You’re just trying to trick Harvey. The memes and jokes to come as a result were pretty good:

END_OF_DOCUMENT_TOKEN_TO_BE_REPLACED

John Oliver took on daily fantasy sports in the latest episode of “Last Week Tonight” on HBO. Should daily fantasy sports be considered gambling or not? The HBO host has the answer, and he provides it in his typical, hilarious fashion. Come for Oliver’s humor, stay for the Seth Rogen cameo.

The chutzpah of this guy! Enjoy. 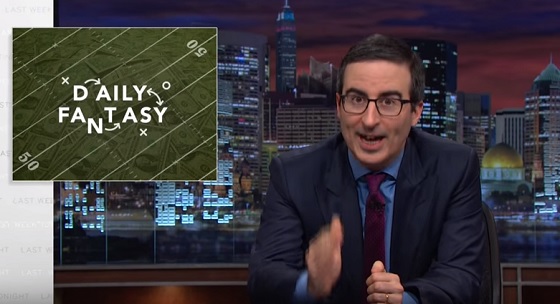 Monday was a historic day on the University of Missouri campus in Columbia as a student group successfully lobbied to have the university chancellor and president step down from their jobs over what they believed were poor responses to racial issues.

The group was led by graduate student Jonathan Butler, who staged a hunger strike until the school president stepped down. Butler’s efforts were supported by the Missouri football team and student association, among other groups.

While Butler and the rest of the Concerned Student 1950 group reached one of their initial goals, we cannot support the behavior of some protesters on campus Monday.

The video below shows the way some of the student protesters, with the aid of some faculty members, bullied a student journalist who was trying to document the protest.

The woman at the end of the video who asks for some “muscle” in pushing out the person recording the video is actually a media professor at Missouri who days earlier wanted the media’s help.

Featured in the video is student reporter Tim Tai, who tweeted the following:

I tweeted this out a few days ago but there's literally a state law on the books affirming right to access quad: https://t.co/vACHgnbBaj

Tai and any other reporter have a right to be on the quad in the public space. As Tai said, the US constitution gives the media the right to photograph and cover the event just as much as it defends the right of the protesters to protest in public. That a group fighting for equal rights would physically bock and prevent a reporter from doing something he has a right to do is shameful. It is incredibly ignorant of the group to argue they are fighting for equal rights and better treatment, yet they are treating a journalist in that way. And then you have a faculty member at the end of the video ask for some “muscle” to help push out the guy who was recording the video.

Oh, and then the student group tweeted this:

It's typically white media who don't understand the importance of respecting black spaces.

If you have a problem with us wanting to have our spaces that we create respected, leave!

It seems to me that this is a group making a lot of noise just to make noise rather than have actual goals aside from having a university president step down. I’d hate to see what the country or university would look like with these bullies in charge. Few things capture the age and culture gap between your average baseball fan and your average young girl than this video.

D-backs announcers Steve Berthiaume and Bob Brenly are going viral for mocking a group of sorority girls who took in Wednesday’s Rockies-Diamondbacks game in Arizona. The girls in question are from Alphi Chi Omega at Arizona State, and they spent a good portion of the inning locked into their phones and fixated on taking selfies. In the words of Berthiaume, they were taking selfies with the hot dog, selfies with the churro, and selfies of a selfie.

That in a nutshell is the difference between middle-aged white males and teenage girls. You could just hear the frustration from the men as if they were trying to get the attention of their own daughters.

Sadly, I’m part of the group that agrees with them. Some people have no idea how ridiculous they can look to outside observers as they shift from pose to pose trying to get that perfect selfie. All the while they’re so engrossed in their phones they’re missing out on real moments in life. Sigh.

A New Jersey high school football player has been suspended 10 days from school and two football games after he ripped off the helmet of an opponent during a game and bashed the player in the head with it.

The play in question occurred during a game Friday Sept. 11 between Linden and Immaculata. The Linden player ripped off his opponent’s helmet and smacked him in the head with it. He was flagged for unsportsmanlike conduct but not ejected because the officials did not see exactly what happened. The Immaculata player received 10 stitches at the hospital later but otherwise seemed to be fine.

The New Jersey State Interscholastic Athletic Association was investigating the matter but will not intervene because Linden was proactive with the case especially when it came to handing down the punishment, NJ Advanced Media reports. Linden could still decide to hand out additional discipline to the player. The school even sent the video footage to the police.

Between this and the play where a few Texas high schoolers targeted a ref, we’re seeing some truly unsavory actions by young players. And we’re also seeing that in this day of the internet and communication, everything has the potential to go viral. Credit to Linden for handling this swiftly and directly. Kansas State University’s marching band is receiving a lot of attention for the curious formation they pulled during halftime of the school’s football game against South Dakota on Saturday.

The Wildcats band did a Star Trek-themed performance. At one point they broke into a formation of what supposedly was of the Starship Enterprise, which was the spaceship used in the popular TV show. However, many people thought they saw something else.

@goEMAW please help me spread this most incredible video in the history of our beautiful university. pic.twitter.com/SMODtgMd2L

That sure looked like the rival Kansas Jayhawks mascot on the left and something potentially inappropriate entering the bird’s beak.

Typically when we see a school band take a shot at a rival during a performance, it’s more subtle in nature like this. It will be interesting to see what the school has to say about the curious formation.

We apologize for anyone offended by our halftime performance depicting the starship enterprise and the Jayhawk mascot.