Time for Olympic bobsled events is measured to the hundredth of a second, but even that sometimes is not enough to prevent a tie.

On Monday, two countries earned a gold medal in the two-man bobsled event in PyeongChang. Canada’s team of Justin Kripps and Alexander Kopacz finished in a dead tie with Francesco Friedrich and Thorsten Margis of Germany. Both teams recorded a time of 3:16.86.

Believe it or not, this is the second time there has been a tie for gold in the two-man bobsled in the past 20 years. Canada was also involved in 1998.

This is the first time there's been a tie for gold in 2-man bobsled since 1998 in Nagano.

Then, Pierre Lueders and Günther Huber tied for gold.

Once again, a Canadian is tied, this time with a German.

Latvia took home the bronze and finished just .05 seconds behind Canada and Germany with a time of 3:16.91. Talk about tough competition. 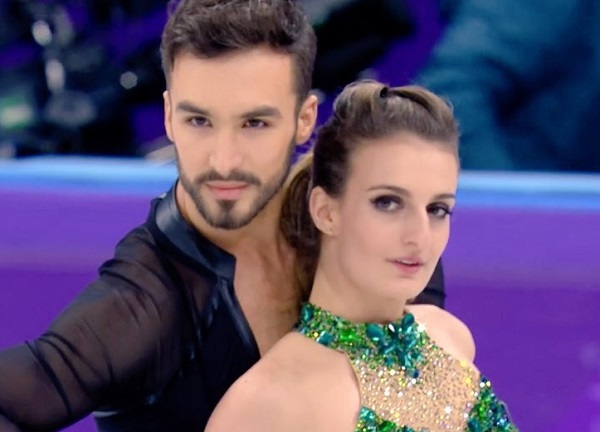 French ice dancer Gabriella Papadakis did an admirable job keeping it together during her program at the Winter Olympics on Monday despite an embarrassing wardrobe malfunction.

A piece that was keeping Papadakis’ top together came undone at the beginning of her short dance with Guillaume Cizeron. That created a distraction for her while she was trying to skate, and also led to part of her breast being exposed during the performance.

After her performance, Papadakis told reporters that the experience was like a “worst nightmare.”

“It was pretty distracting. It was kind of my worst nightmare happening at the Olympics. It happened in the first few seconds of the program. I told myself I didn’t have a choice, I had to keep going. That’s what we did. I think we can be proud of ourselves too, to be able to deliver a great performance with that happening,” Papadakis said.

“I felt it right away and I prayed. That’s about what I could do.”

Papadakis and Cizeron scored an 81.63 in the short program and are in second behind the Canadian team of Tessa Virtue and Scott Moir.

French ice dancer Gabriella Papadakis had a major wardrobe malfunction during her short dance program at the 2018 Winter Olympics on Monday.

Papadakis was wearing a halter top of sorts, and her partner, Guillaume Cizeron, seemed to unhook the top of the dress towards the beginning of the program. Unfortunately, Papadakis ended up worrying about her top coming off and exposing her left breast throughout the rest of her dance program.

On a handful of occasions, Papadakis’ breast was actually exposed.

Papadakis and Cizeron were still able to complete their program and finished with a score of 81.93, which placed them second in the standings. Papadakis was remarkably composed afterwards despite the embarrassing distraction with which she had just dealt.

Sadly, Papadakis has plenty of company in the wardrobe malfunction department. Ending up with a medal despite this will be a nice way to get over the whole ordeal.

Lindsey Vonn is playing mind games with her opponents Lindsey Vonn didn’t become an Olympic gold medalist simply by being a good skier; she also knows how to win the mental game with her opponents.

The American skier practiced on Monday in PyeongChang in the women’s downhill event and had a good run, but she intentionally tried to make herself worse. That was a strategic move by the 33-year-old.

“I was trying to slow myself down,” Vonn told NBC’s Heather Cox when asked why she held her hands up as she approached the finish line. “I actually didn’t want to win the training run today. I like letting other people think that they’re faster.

“In ski there’s a few things you an do to play mind games. I use every opportunity,” she said while laughing.

Vonn wound up third in the second training run for the downhill, 0.35 behind Stephanie Venier at the time of her interview.

Vonn is looking to rebound from her performance in the super-G on Saturday, which included a bobble at the end that left her out of medal contention, and led to plenty of backlash from hating fans.

Vonn’s Olympic gold medal came in the downhill at the 2010 Winter Games in Vancouver. She is hoping to become a two-time gold medalist in the event. U.S. figure skater Mirai Nagasu was left off the 2014 Olympic team, but she didn’t let that keep her down.

In a press conference, Nagasu admitted that it was “heartbreaking” to be left off the 2014 team after competing as a 16-year-old at Vancouver in 2010, but that she looked to other American Olympians for inspiration to get back.

“I am not a fade-away person,” Nagasu said, via NBC Olympics. “Most athletes are not that way. In the history of sport in general, people stick around. Look at Shaun White and Lindsey Vonn just continue on, Olympic cycle after Olympic cycle, that is why they are famous. I think I am one of those athletes and I stand to show that people should not give up, they should keep going.”

Not only did Nagasu persevere and make an Olympic comeback, but she made a little bit of history as well.

American ice dancer Madison Hubbell will compete for a medal next week in a costume designed specifically for her — by her own mother.

Hubbell’s mother Susan went to college for fashion design, and the ice dancer has insisted that her mother handle her costumes since she started in the sport at age five.

“There are people who make really amazing costumes, and as you can imagine they’re very expensive, so it’s not really rare for moms to make costumes for little girls starting out,” Madison Hubbell said, via NBC and the AP. “Yeah, at a certain level it becomes more competitive, but luckily my mom went to college for fashion design and she’s been sewing since she was young, so really, she is a professional.”

Susan Hubbell admits there’s a lot of pressure in getting the outfit right, but she’s proud to design and create what her daughter wears.

“Oh my God, the criticism is ridiculous,” Susan Hubbell said. “I will say that we’ve done some incredible costumes, I feel like, and we’ve done some that if I looked back I might change in some way. But if I look at the overall realm of figure skating and what people put out there sometimes, on a whole — the world, global level — I think you’d look at Madison and say she’s in the top percentile.”

There are moments where outfits change at the last moment — including a costume with $1,000 worth of rhinestones on it that was discarded after being worn once.

“It was incredible. The thing was solid, tiny little rhinestones,” Susan Hubbell said. “But it happens all the time, I’ll make a costume and they’ll change their mind, or they want to go with a different feel, and all it does is hangs in the closet. Nobody ever sees it again.”

There is no shortage of parents who are heavily involved in the lives of their athlete children, but this is a pretty neat twist. The American ice dancing team of Hubbell and partner Zachary Donohue face a difficult battle to get on the podium, but it would be a neat story if they can pull it off in light of this.

Chloe Kim went from really, really good snowboarder to Olympic legend overnight, and naturally people are now coming out of the woodwork to congratulate the gold medalist. But if you weren’t nice to her before, Kim doesn’t want to hear from you now.

On Saturday, Kim sent a hilarious tweet about people who were mean to her when she was in kindergarten trying to be her “bestie” now that she’s taking home some hardware.

People acting like my bestie after the Olympics. Like remember when you took a sip of my apple juice in kindergarten, still salty bout that

Funny comments are nothing new for Kim, as the 17-year-old has endeared fans with her awesome and timely tweets in addition to her halfpipe skills. Let her latest quip be a message to any Johnny-Come-Lately out there: Don’t even bother.

A group of fans from Canada showcased their sense of humor on Sunday during their country’s hockey game against the Czech Republic, and fans of “South Park” will love it.

We won’t get into the entire backstory, but the Canadian fans had custom jerseys that made reference to the popular “South Park” characters Terrance and Phillip — specifically in an episode called “Canada on Strike.” In it, Canadians who decide to go on strike against the rest of the world because they feel disrespected end up arguing among themselves using pronouns like “buddy” and “guy.” Here is the group of fans from Sunday:

How bout those Canadian fans? pic.twitter.com/H8paaow2oR

You can see the context from “South Park” below:

Canada ended up losing 3-2, but you can bet these buddies, guys and friends were able to shake it off fairly quickly. American freestyle skier McRae Williams failed to medal in his competition on Sunday, but it certainly was not due to a lack of effort.

Williams told USA Today’s Rachel Axon that he dislocated his shoulder mid-run in the men’s slopestyle event and popped it back in as he was still going.

McRae Williams said he dislocated his shoulder mid-run and popped it back in during the run. He injured his MCL at X Games and tore his calf muscle in practice here. Will tape it all up and compete in final if he gets through.

The 27-year-old Williams did not ultimately qualify for the final though and finished 15th with a time of 81.60. As hinted at above, he has also had his fair share of injuries to fight through dating back to last year’s Winter X Games.

Dislocating your shoulder and casually popping it back in mid-race is definitely no joke though, and Williams now becomes at least the second Olympic athlete that we have seen power past a gnarly injury in PyeongChang.

10 takeaways from the first week of 2018 Winter Olympics

We’rea week into the 2018 Winter Olympics, and we’ve already learned a lot about the field this year. There have been a number of remarkable performances from countries and individual athletes alike, and while there’s a long way to go, we can still celebrate the accomplishments so far.

1) Norway remains the class of the Winter Olympics

Norway has a rich history of success at the Winter Olympics, and 2018 is shaping up to be no different. They’ve won 24 medals so far to lead all countries. Their excellence in cross-country skiing is what sets them apart. They have 10 total medals in cross-country skiing, including four golds and four silvers. The highlight came when they swept the podium at the 30 km skiathlon. The most remarkable part of that race was winner Simen Hegstad Krueger, who came from dead last after a crash to win by eight seconds. There’s surely more to come from Norway, who have taken their customary spot near the top of the medal count.

2) Americans are still the dominant force in snowboarding