Trading for Prince Fielder was one of the notable additions the Texas Rangers made this offseason, and Adrian Beltre thinks the acquisition will pay off in a big way.

Fielder has finished in the top five in MVP voting three times, including two third-place finishes while with the Milwaukee Brewers. Fielder had a down season by his standards last year in Detroit, which is part of the reason the Tigers sent him to Texas in exchange for Ian Kinsler. Prince’s 25 home runs, .362 on-base percentage and 75 walks were his lowest marks since his first full season in the bigs back in 2006.

But if you thought Prince was part of a stacked lineup the last two seasons with the Tigers — and he was — the Rangers will likely match it.

Texas has Beltre, Elvis Andrus, and free agent Shin-Soo Choo set to join Prince as the team’s 1-4 hitters. Alex Rios is another strong hitter, Mitch Moreland has pop as a utility man, and Jurickson Profar has a world of talent. Having a change of scenery and playing in a friendlier ballpark for left-handed hitters, I’m expecting a big season from Prince. Will it be enough for him to win AL MVP? Maybe not, but he’ll be in the mix. Texas Rangers third baseman Adrian Beltre is one of the most entertaining characters in baseball. The best part about it is it doesn’t even seem intentional. Sunday night was a perfect example.

In the ninth inning of a win over the Houston Astros, Beltre got caught in a rundown between second and third base. It appeared that he may have somehow avoided the tag at third base, but it didn’t really matter. From my understanding of MLB rules, running into left field constitutes being out of the base path.

Classic Beltre. Usually it’s Elvis Andrus who provides us with all the laughs by constantly screwing with Beltre, but Adrian made this one happen on his own. Never change, Beltre.

Elvis Andrus just loves to mess with Adrian Beltre. The Texas Rangers shortstop’s ongoing antics with his teammate continued on Monday when he decided to interfere with Beltre on a popup yet again. This one occurred in the bottom of the third inning of the Rangers’ 8-5 win over the Baltimore Orioles. Adam Jones was up with two on and nobody out and popped up a pitch from Derek Holland to the left side of the infield. Beltre called for the ball and made the putout, but the play did not come without some interference from Andrus, who snickered after Beltre made the catch.

You have to understand that fighting over popups is a regular issue for the two.

We encountered a similar situation on June 22 in a Rangers-Cardinals game.

END_OF_DOCUMENT_TOKEN_TO_BE_REPLACED Adrian Beltre is a strange guy. Like many other professional baseball players, he has a number of quirks and superstitions. But more than anything else, Beltre hates being touched on his head.

The Rangers third baseman has a history of lashing out at teammates who dare to touch his dome, and shortstop Elvis Andrus was feeling bold during a mound conference on Saturday night. Andrus touched Beltre’s head just as the discussion was breaking up, and Beltre reacted accordingly by humming his glove at Andrus in anger.

These two have developed quite the relationship. Between the head touching and Beltre giving Andrus the death stare earlier this month on a pop fly, it seems like they have an older brother-annoying little brother relationship. It certainly looks like Andrus has a lot of fun with it. Adrian Beltre does not like it when people come into his territory when he is calling for a fly ball. If you didn’t know that prior to the Texas Rangers’ game against the Milwaukee Brewers on Tuesday night, you do now.

As you can see from the GIF above that was posted on Reddit, Beltre was camped under a pop fly when shortstop Elvis Andrus came drifting over and looked like he was thinking about making the play. Beltre waved his arms like a madman and told Andrus to get the hell out of there. After Beltre secured the ball, he gave his teammate the death stare.

It looked like Andrus was smiling as he jogged away, but Beltre didn’t appear to be messing around. The two players were able to avoid a collision, but that wasn’t enough for Adrian. Next time, Elvis better stay out of his wheelhouse and let him do his thing. Eric Gagne recently wrote an autobiography, and on Wednesday we found out that it contains at least one bombshell piece of information. In the book, “Game Over: The Story of Gagne,” the former closer calls most of his former Dodgers teammates cheaters by estimating that a whopping 80 percent of them used human growth hormone.

One of his former teammates, Adrian Beltre, wishes Gagne had been more specific.

“He should have named names,” Beltre said Thursday according to the Dallas Morning News. “I don’t know what you want me to tell you … For him to say something like that, he should have come out with names instead of a percentage.”

Beltre and Gagne were teammates from 1999-2004. The 2004 season was by far Beltre’s most productive offensively. He hit 48 homers and drove in 121 runs that season. He has belted 35 homers this year — the second-highest total of his career — and has never driven in more than 105 runs in a season aside from 2004.

Based on the numbers Beltre had when he played with Gagne, he would probably be a lock for the 80 percent who used performance-enhancing drugs for people who believe Gagne’s theory. If he truly did not use steroids during those seasons, you can understand why Beltre would be upset that Gagne didn’t name names. Unless you think Gagne is full of it, Beltre 2004 numbers make him a prime suspect. Adrian Beltre left Tuesday night’s Red Sox-Rangers game in the eighth inning after being hit in the head by noted headhunter Vicente Padilla. The Rangers third baseman was tested for a concussion but everything reportedly was normal. Doctors say he only has a contusion.

Beltre is pretty lucky that’s all he escaped with, though there is no word if he’ll miss Wednesday’s rubber match. He was able to speak to reporters after the game and told them he didn’t think the 0-2 pitch that hit him was intentional.

The ball went flying after it bounced off his helmet. It looked really bad. But like Beltre said, given the situation, Padilla likely wasn’t targeting him, even though he’s never been afraid to throw some chin music.

Cue the cries for instant replay. Those of you who were watching Game 1 of the World Series on Fox Wednesday night got to experience their new “Hot Spot” infrared camera. While the concept is pretty strange, it did further prove that a blown call helped the Cardinals secure a 3-2 victory over the Rangers.

With one out in the ninth and trailing by a run, Adrian Beltre hit a ground ball to third and was thrown out. However, Beltre reacted like the ball had hit him off the foot and then chopped down to third, and replays revealed that it had. The “Hot Spot” camera clearly showed a heat mark where the ball had struck Beltre in the toe. Check out this picture that Big League Stew shared with us: 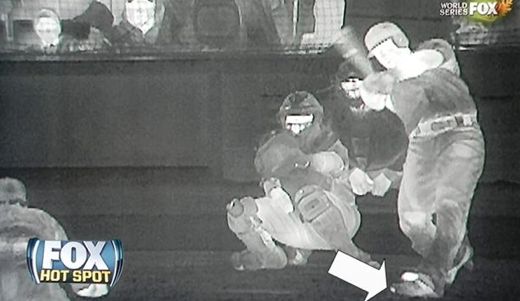 That is certainly a tough call for the home plate umpire to make considering how crisply the ball rolled to the third baseman, but it supports those like Jack McKeon who believe full instant replay would help the game of baseball.  In a one-run World Series game, that missed call is huge.  You can tell the ball hit Beltre’s foot even without the whacky infrared camera shot.  Bad call or no bad call: Cardinals 1, Rangers 0.

This is a no-brainer. The fans vomited on themselves with this one, probably because a) Jeter is so popular and b) most of them don’t know who Peralta is. Asdrubal Cabrera made the team as the backup shortstop and he should be starting. Peralta should be the backup.

Paul Konerko being left off the team is the biggest snub of MLB. He has a .954 OPS which is fourth-best in the entire AL. It’s a joke that he’s not on the team and it’s criminal that Ron Washington stuck him in the fan vote. Instead of carrying three catchers, Washington should have put Konerko on the team over either Martin or Wieters. At the least, he should be there over Young who is good but can’t mash the way Konerko can.