Chandler Champion was named Miss Alabama 2013 earlier this summer, and she plans to put her state pride on full display the night before she competes in the Miss America pageant on Sept. 15. Champion may not date the starting quarterback of the Alabama football team like a certain former Miss Alabama, but it appears she loves the Crimson Tide just as much.

During the “Show Us Your Shoes” event at Atlantic City on Sept. 14, Champion will be strutting her stuff in a Roll Tide-themed dress. She will also ride on a float that spells out “Roll Tide” on the front and has an Alabama National Championship emblem on the back. Here she is modeling the dress:

Miss Alabama director Nan Teninbaum said the dress made sense given the fact that Champion is an Alabama student and the team has been so successful in recent years.

“With Chandler being a University of Alabama student and the university being the national champs for three years, we chose to do national champs,” Teninbaum told AL.com.

Now that’s how you show off your school pride. The infamous Harvey Updyke could learn a thing or two from the lovely Miss Champion. 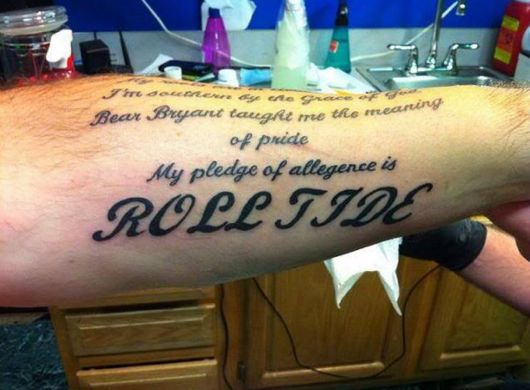 We make fun of tribute tattoos quite often, because many of them look ridiculous. But at the end of the day, it’s a person’s prerogative to choose what they want permanently drawn on their body. Just try to make sure everything is spelled correctly.

As you can see from the photo above that a Reddit user passed along, a fan recently got a famous Alabama saying tattooed on his forearm. The problem is the passage says he is showing his “allegence” to Roll Tide. That looks like a pretty expensive fix.

I’m no tattoo artist, but I doubt it’s possible to change the word “allegence” to its proper spelling of allegiance. If there is a way to turn an “e” into an “ia,” I can’t envision it. We have seen spelling errors and grammatical mishaps in tattoos before, so this is nothing new. It is, however, still hilarious. Just how passionate and crazy are Alabama fans about their football team? Crazy enough to reportedly throw six figures at a broken trophy.

According to TideSports.com reporter Cecil Hunt, a broken 2011 BCS National Championship trophy was sold for $105,000 at an Alabama Celebrity Golf Tournament on Sunday.

Alabama earned the trophy by going 12-1 during the 2011 season and beating LSU in the BCS title game. The trophy, which costs $30,000, was broken in April 2012 when the father of former Alabama player Carson Tinker tripped on a rug and knocked it over. Tinker’s father must not feel too badly about it now that the trophy brought in thousands. In this case, you break it, somebody else buys it. For a lot of money.

Fan has tattoo that combines Alabama, Nick Saban and ‘Sons of Anarchy’ (Picture) What do you get when you combine Nick Saban and your love for Alabama football with the “Sons of Anarchy?” You get one of the creepiest back tattoos you will ever see, which comes to us courtesy of this Alabama hate group on Facebook.

As you can see, some die-hard Crimson Tide fanatic came up with a unique idea for a tattoo on his back that says “Sons of Saban” above some sort of grim reaper with an Alabama logo mixed in. There’s a lot going on, to say the least. But with Alabama fans, nothing really surprises us.

In terms of the weirdo scale, I’d file this tattoo somewhere between that Chiefs fan’s head tattoo and AJ McCarron’s chest tattoo.

H/T SB Nation via Game On! Texas A&M shocked the college football world on Saturday when it came way with a road victory against No. 1-ranked Alabama that included a goal-line stand to seal the game. The photo you see above was posted on Reddit over the weekend, and according to an Outkick the Coverage reader the rump actually belongs to an Aggies fan.

If you’d like to see a more hairy and disturbing photo of the tattoo, click here. The victim of the lost bet is named Calvin N., and it turns out Calvin is the victim of a lost bet. At first we thought this had to be a Crimson Tide fan since Texas A&M won the game, but apparently Calvin is one of those pessimistic fans that likes to bet you his own team has no chance of winning just so he’s not disappointed. His roommates said they would pay him $100 if he turned out to be right and Bama won but that he would have to get an ass tattoo of the final score if Texas A&M won. The rest is history.

END_OF_DOCUMENT_TOKEN_TO_BE_REPLACED With a shocking loss to Texas A&M on Saturday, Alabama may very well have played itself out of a shot at the BCS National Championship Game. Kansas State, Oregon and Notre Dame all remained undefeated, meaning two of those three teams would play for the championship if two or all of them win out.

Crimson Tide fans are likely still in awe that their dreams of a repeat may have been erased on their own home field over the weekend. One diehard fan was playing “Call of Duty: Modern Warfare 3” during what turned out to be Bama’s final drive of the game, and he was irate with what he saw. Check out this video that Deadspin shared with us, which contains some extremely NSFW language. It gets really good around 1:30.

END_OF_DOCUMENT_TOKEN_TO_BE_REPLACED If your plane crashed on the way to a college football game and you survived, would you make sure you were still able to get there by kickoff? If you answered “no” to that question, you probably aren’t an SEC fan. If you’re anything like the four men whose plane went down on their way to the Alabama-Ole Miss game on Saturday, you wouldn’t have missed a minute of the action.

On Monday, NBC 15 TV in Mobile, Ala. shared the story of four friends who cheated death on their way to Tuscaloosa this past weekend when one of the engines from their small plane stopped working. They were 20 miles from the airport when the other engine started sputtering and Captain George Arnold, the plane’s pilot, had to make an emergency landing on a dirt road.