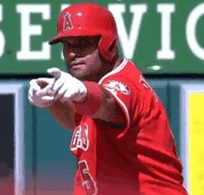 The Los Angeles Angels are having a lot of fun with Yasiel Puig this week. One night after Albert Pujols showed up Puig by tagging up at first and taking second on a fly out to center, Pujols and Erick Aybar decided to mess with the young Dodgers star on the field before the game.

A few innings before Pujols tagged up and took second on Puig Monday night, Puig tried to double Aybar off at first on a fly ball. The two exchanged finger wags. The horseplay on the field was obviously a spillover from all the ribbing that was exchanged the night before.

In the end, Puig and the Dodgers got the last laugh with a walk-off win in the 9th inning. Albert Pujols taught Yasiel Puig a valuable lesson during Monday night’s game between the Los Angeles Angels and Los Angeles Dodgers. When Pujols was on first with LA leading 5-0 in the eighth inning, he somehow managed to tag up and take second base on a fly out to center field.

Pujols, who doesn’t run well at all, completely caught Puig off guard. Puig nonchalantly fielded the fly ball before realizing what Pujols was up to. Albert easily beat the youngster’s throw and mocked him for it after the inning ended. Puig had fun with several of the Angels players over the course of the night. He made a catch on a line drive to center field two minutes earlier and tried to throw behind Erick Aybar to double him off at first, but Aybar got back safely. The two exchanged finger wags.

Dodgers manager Don Mattingly told reporters after the game that he hopes Pujols taught Puig something.

“I hope he learns a lesson from it,” he said, per MLB.com’s Alden Gonzalez. “Albert knows how to play the game. Albert takes a few hard steps and if Yasiel comes up throwing, he stops. He drops his head and Albert knows there’s no play. We talked about them being an aggressive team. If you don’t pay attention, they will embarrass you, and he embarrassed him there.”

Puig has shown us on several occasions that he has a tremendous arm, which is what made Pujols’ successful tag up so hilarious. Now we see why Mattingly is hesitant to put Puig in center.

Albert Pujols probably could not wait to get out of Baltimore on Thursday night. The next time Pujols rips a ground ball or line drive down the third base line, Manny Machado will not be there to gobble it up.

You now how Machado made that incredible off-balance throw to rob Pujols of a hit on Wednesday? The Orioles star did it again on Thursday, only this time he made it look easy. When Pujols scorched a one-hopper to Machado’s left, the 22-year-old must have remembered that he gunned Pujols out by several steps the night before. He set his feet this time. That throw could not have been more perfect. It helps that Pujols doesn’t run well, but his lack of speed takes nothing away from either one of Machado’s plays. Here’s Machado’s first throw as a refresher of the type of incredible week he has had:

There’s a little bit of a beef brewing between the Angels and the Mariners this year.

The teams have been two of the best in the AL this season and are competing for a playoff spot from the AL West. They also had a great 3-game series in Anaheim over the weekend, with the teams splitting 3-2 extra-innings wins the first two games, and the Angels getting a walk-off 6-5 win on Sunday.

During their comeback in the 9th inning Sunday, Angels stars Albert Pujols and Mike Trout even mocked Mariners closer Fernando Rodney, who blew the save and took the loss.

Rodney walked Trout to start the 9th, and Pujols inside-outed a fastball down the right field line for a tying double to make the score 5-5. After Trout scored the tying run, he and Pujols exchanged arrows to mock Rodney, who fires a bow and arrow as his save celebration. Keep in mind that after escaping a jam in the 8th inning, Rodney did his arrow celebration and pointed it towards the Angels dugout.

After allowing the tying run, Rodney gave up a single, intentional walk and got a double play. Following another intentional walk, Grant Green hit a walk-off RBI single to give the Angels their 59th win of the season.

There will be other days for Rodney, but you know this had to hurt. And he has no room to get mad at the Angels for mocking him when he started things by pretending to fire one of his arrows at the Angels dugout.

Angels starter Tyler Skaggs, who took a no decision, had even better quotes.

What goes around comes around. Also keep in mind that Rodney pitched for the Angels in 2010 and 2011 and was not happy by the end of his stint with the team. After losing the closer job in 2011, Rodney complained about his lack of a role and said the team should trade him. Maybe some of that beef with the coaches still lingers for him.

Here’s another angle for Pujols doing the bow and arrow: