If it wasn’t already obvious, Andy Dalton’s stop in Dallas looks set to be a one year stint.

Dalton spoke to the Dallas media on Wednesday and made clear that he still views himself as an NFL starter, and hopes that backing up Dak Prescott with the Cowboys sets him up for a better situation when he returns to free agency next year.

New Cowboys backup QB Andy Dalton said he wants to "help Dak as much as I can. Obviously, I bring a lot of experience. … Hopefully, this sets me up for the future." He is scheduled to re-enter free agency in 2021. "I believe I'm a starter in this league."

There were a lot of circumstances working against Dalton. He was released late, after most teams had already filled whatever holes they had at quarterback. The coronavirus pandemic also prevented him from traveling to meet with any teams.

It’s pretty clear that the Cowboys have no plans to start Dalton unless something happens to Dak Prescott. He’ll try to help however he can in Dallas and then move on in search of a starting job once more.

The Dallas Cowboys should have one of the most reliable backup quarterbacks in football this season, and they saw how important that can be when the division rival Philadelphia Eagles won the Super Bowl two years ago. From the sound of it, the success Nick Foles had in Philly may have factored into the Cowboys’ decision to sign Andy Dalton.

Cowboys CEO Stephen Jones spoke about the Dalton signing on Wednesday, and he likened it to when Foles was the backup behind Carson Wentz with the Eagles.

“To have a guy like Andy Dalton come in here – not unlike what Philly had with Nick Foles when Carson Wentz went down – to be able to take control and win games, win huge games for you if that’s what you need is really important,” Jones said, via ESPN’s Todd Archer. “Certainly you can lay your head on the pillow better at night knowing you have someone like Andy Dalton.”

The success Foles had with the Eagles is the best-case scenario for a backup quarterback, as he led the team to a title and was named Super Bowl MVP. It would be a leap to say Dalton could do the same, but that season in Philly certainly highlighted the importance of having a reliable backup quarterback.

While the Cowboys’ decision to sign Dalton reportedly had nothing to do with Dak Prescott’s contract situation, Dalton is more than just injury insurance with Prescott negotiating a new deal. He has a ton of starting experience and should be able to keep Dallas afloat in the event of an injury or — though highly unlikely — a holdout.

Andy Dalton shares why he signed with Cowboys

Andy Dalton surprised some people with his decision to sign with the Dallas Cowboys, as the move essentially locks him into a backup role barring an injury to Dak Prescott. However, the veteran quarterback still believed the Cowboys were the right choice at this stage in his career.

Dalton was a guest on “The Adam Schefter Podcast” this week, and he explained his rationale behind signing with Dallas. He cited an opportunity to win while learning under head coach Mike McCarthy.

Andy Dalton on the @AdamSchefter podcast on joining the Cowboys: “This team is ready to win. I felt like it was the best opportunity for this year and hopefully it will set me up for my future. … I feel like there is a lot of good football left for me." pic.twitter.com/JHuqROHR1j

If Prescott were to get injured or (though it is unlikely) hold out for a long-term contract extension, Dalton would be in a tremendous situation. The 32-year-old clearly thinks he can start for a team again in the future, and any playing time he might receive in Dallas will be a chance to prove himself.

The best-case scenario for Dalton at this point in the offseason would have been an opportunity to compete for a starting job. Getting beat out by someone like Gardner Minshew in Jacksonville would have been worse for his career than backing up Prescott, so in that sense you can understand why he chose the Cowboys.

Dez Bryant may not agree with the Cowboys bringing in Dalton, but they have secured themselves a reliable backup. The signing could very well work out nicely for both sides. 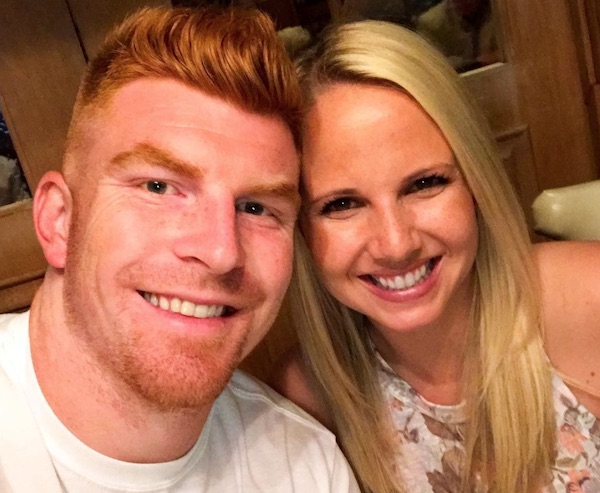 Andy Dalton and his wife Jordan are ready for the next chapter of the quarterback’s career.

Dalton signed a one-year deal with the Dallas Cowboys on Saturday. He took to Instagram on Sunday for the first time since being released, and he thanked the Cincinnati Bengals and their fans with a classy video and message.

Thank you Cincinnati for the past 9 years. There are countless memories that will be with me forever. I am thankful for the friendships, my teammates, coaches, and the organization. Y’all pushed me to be a better everyday. Thank you to the Cincinnati community for supporting the @ajdfoundation. We could not have made the impact we did without y’all. Thank you @jjdalton5 for always supporting me and being by my side every step of the way. I am blessed that we are on this journey together. We will always cherish our time in Cincinnati. Who Dey!

While Dalton chose to first focus on reflecting upon his time in Cincinnati, Jordan expressed excitement about joining the Cowboys organization.

We are so excited to be a part of this amazing organization!! @andydalton14 I couldn't be more proud of the man you are! Watching you grow through these last 9 years in the NFL has been incredible! There is truly no one else like you! I can't wait to see what God does this next season of life!! I am so proud of you! Go Cowboys!! Ephesians 2:10

Andy and Jordan did a ton for the Cincinnati community during Dalton’s time with the Bengals, and they will likely always maintain ties to the area. We saw how appreciated Dalton was by the city with the way his charity was flooded donations amid tough circumstances last season.

Dalton may have a better chance to win a championship in Dallas, but all indications are that he is not going to get any significant playing time unless there is an injury.

Andy Dalton has signed a contract that essentially locks him into a backup role in 2020 barring an injury, and many were surprised that he didn’t pursue a better opportunity to start. Perhaps there was none available.

Jacksonville and New England were mentioned as two of the most likely landing spots for Dalton before he signed with the Dallas Cowboys. As Albert Breer of The MMQB noted on Sunday, the fact that Dalton “chose” the Cowboys was likely a product of the lack of interest from the Jaguars and Patriots.

Cowboys' signing of Andy Dalton should also contextualize the level of interest from the Jags and Pats, since both would've given him an easier path to playing time.

Neither showed the Bengals much in trade interest. And obviously Dalton coming free didn't change things.

Some have wondered if the Cowboys signed Dalton as insurance in case Dak Prescott holds out, but that is reportedly not the case. The reality is the Patriots are committed to giving Jarrett Stidham a shot, and Jaguars head coach Doug Marrone already said Gardner Minshew is his top guy. If Jameis Winston was unable to find a starting job and Cam Newton is looking at potential backup roles as well, a backup role with a contending team was probably the best Dalton could do.

Report: Andy Dalton signing has ‘zero’ to do with Dak Prescott contract situation

Was the Dallas Cowboys’ signing of Andy Dalton a message to Dak Prescott? Some are already starting that speculation, but the Cowboys are saying that is far from the case.

Prescott was given a franchise tag by the Cowboys but has not signed his tender yet. The sides are negotiating and have until July to reach a possible long-term extension. So were the Cowboys adding Dalton as competition and to pressure Dak?

According to what a source told NFL Media’s Tom Pelissero, the Dalton signing has “zero” to do with Prescott’s contract.

How much does the Andy Dalton signing have to do with Dak Prescott’s unsigned franchise tender?

The #Cowboys think Dalton will be great for the QB room. Not often a QB like that is available in May.

That is how we feel.

Dallas is not stupid. They want to sign Prescott long term and have offered him contracts. I don’t believe Dalton is a chip used to pressure Prescott, as some may think. The Cowboys saw an opportunity to sign a good backup for cheap. How could they pass that up?

Dalton is signing a one-year deal with the Dallas Cowboys, ESPN’s Adam Schefter reported on Saturday. The deal is for $3 million guaranteed and as much as $7 million in incentives.

Dalton, 32, is from Katy, Texas, which is outside of Houston. He went to college at Texas Christian in Fort Worth and owns a home in Dallas, so this will be a chance to play close to home.

Dalton was a second-round pick by the Bengals in 2011 and was a starter for eight straight seasons until being benched last year. He was released by Cincinnati last week after the Bengals took Joe Burrow No. 1 overall.

In Dallas, Dalton will serve as a very capable backup quarterback for the Cowboys, who are playoff hopefuls and have added CeeDee Lamb to their already explosive offense. This is a very nice pickup for the Cowboys, and it comes at a good price.