Billy Hamilton is on the verge of landing with a new team.

According to Jim Bowden of The Athletic, Hamilton is nearing a deal with the Kansas City Royals, pending a physical and a handful of minor details.

With the Royals deep in rebuilding mode, Hamilton will probably see plenty of action in Kansas City. He landed on his feet quickly after being non-tendered by Cincinnati, which is no surprise. He’s as valuable a baserunner as a team could have, even if he’s not known as a good hitter, and he excels in center field as well. If the Royals are sticking to their defense and small ball template, Hamilton is a perfect fit.

The Cincinnati Reds are moving on from one of their most well-known players.

According to C. Trent Rosecrans of The Athletic, the Reds have decided not to tender a contract to outfielder Billy Hamilton, who will become a free agent.

#Reds will non-tender OF Billy Hamilton

There were hints that the Reds were ready to move on from Hamilton last season, when he was made available in trade talks. While nothing came of it, it was a pretty clear hint that his days in Cincinnati were numbered. He may be the fastest man in baseball and plays a good center field, but he simply didn’t hit enough for the Reds’ liking, posting a .234 average with a .299 on-base percentage in 2018. The Giants and Reds are reportedly continuing to discuss a trade centered around speedy outfielder Billy Hamilton.

Last month, MLB Network’s Jon Morosi reported the Giants had interest in acquiring Hamilton to bolster their outfield. It appears that is still the case as Morosi followed up on his initial report by saying discussions between the two teams are still ongoing.

Hamilton’s biggest asset is his speed, which has allowed him to make highlight reel catches in the outfield. It has also helped him steal 50+ bases in each of the past four seasons.

The San Francisco Giants are looking to improve their outfield this offseason, and Billy Hamilton is one of their targets.

MLB Network’s Jon Morosi says Hamilton is a player the Giants are interested in, along with Jackie Bradley Jr.

Hamilton is under team control with the Cincinnati Reds for another two seasons before hitting free agency. Though he’s stolen 50-plus bases in each of his full seasons in the league, getting on base has proven to be the tough part for Hamilton. The speedster’s career batting average is under .250 and his career OBP is below .300.

The Giants have also been in the mix for Giancarlo Stanton, who would be the real prize of the offseason. 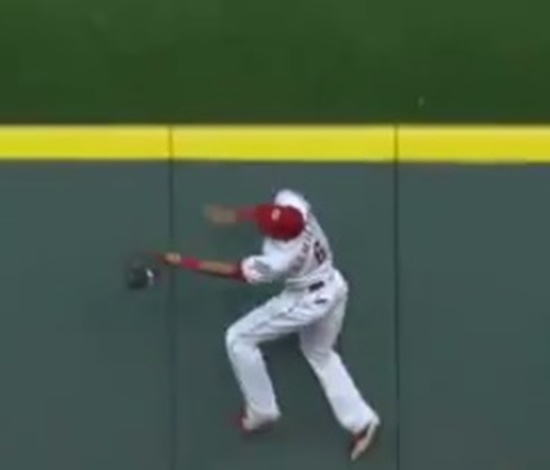 Cincinnati is home to two of the fastest men in America. Wouldn’t it be fun to see them face off to see who truly is the fastest?

During this year’s NFL Combine, John Ross set a new record for the event by running the 40-yard dash in a blistering 4.22 seconds. If you didn’t see it (or want to again) you can here, just don’t blink.

During last week’s NFL Draft, the speedy wide receiver was selected No. 9 overall by the Bengals, meaning he will be play his home games a short distance from where Billy Hamilton does. Hamilton has put his impressive speed to use to steal 171 bases for the Reds over the past three seasons and went into Thursday’s game against the Pirates leading Major League Baseball with 15 so far this season.

“I know he’s really, really fast,” Hamilton said, via USA Today. “It is something I look forward to. I’m a competitor. I’m willing to do it for a charity event. I haven’t done a 40 since ninth grade, a 4.5 flat.”

I’m with Hamilton. I think it would be a fun event too. And, it would help raise money for a worthy cause. Here’s to hoping the race actually happens.

Tickets to see Hamilton are probably already off the market. But the same apparently can’t be said of Cincinnati Reds center fielder Billy Hamilton.

According to a report by Buster Olney of ESPN on Tuesday, the Reds are open to offers for all of their players, including Hamilton.

The speedy 26-year-old batted .260/.321/.343 with three home runs, 17 RBIs, and 58 stolen bases in 2016, while also affirming himself as one of the top defensive outfielders in the game (as you can see from plays like this). Hamilton is entering his first year of arbitration eligibility in 2017 and is under team control through 2020.

While the Reds, who were the cellar-dwellers of the NL Central last season with a pitiful record of 68-94, recently suggested a desire to retain one core piece, a valuable young asset on an agreeable deal like Hamilton could be an entirely different story.