Steve Sarkisian on Thursday responded to the viral video involving one of his assistant coaches.

A video of Texas defensive line coach Bo Davis cursing out his players on the bus following their embarrassing 30-7 loss to Iowa State last weekend went viral this week. There was significant backlash for the person responsible for recording/leaking the video (seen here).

Sark was asked about the situation and backed his coach.

Sark on Bo Davis video: "I think one thing that jumped out to me when I first saw the video, you could hear the passion in Bo’s voice. We really believe in the staff that we hired and what we came here to do. You could feel the passion and want to get it done."

ICYMI: A few of Sark's comments on the Bo Davis video and if his #Longhorns are buying in:

"You could hear the passion in Bo's voice."

"We're here to build a culture.. into a place that makes Texas Football special again – and that's a process."#Hookem #bodavis @fox7austin pic.twitter.com/iZiJzBI0Wf

Sarkisian also promised that the issue with the person who leaked the video would be handled internally.

Texas coach Steve Sarkisian on the player who recorded/leaked the Bo Davis video: “It’s unfortunate that a young man decided to do that.” He called it “a mistake we’ll handle internally.”

Some former Longhorns have other ideas about how the leaker should be handled. Sarkisian said he is not ready to give up on his players either.

Sarkisian is in his first season as Texas’ head coach after taking over for Tom Herman. The Longhorns are 4-5 and have lost four in a row. 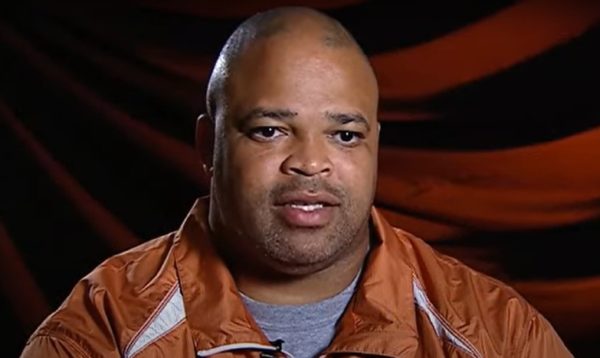 A video of Davis yelling at his players on the team bus for their pathetic effort in a 30-7 loss to Iowa State last weekend was leaked online this week.

You can see the video below, but beware, it contains cuss words from the passionate coach.

Texas DL coach Bo Davis with some choice words following Texas’ no-show in Ames. Refreshing to hear someone with some passion for winning other than the old “winning is hard” BS. Fire em up! #HookEm pic.twitter.com/NA24NIuDwD

The reason the video leaking is unclear, but several former Longhorns are furious that someone from within the program — seemingly a player — recorded the video and potentially shared it publicly.

Here is the reaction from Quandre Diggs.

whoever recorded the video of Coach Bo need to be gone plain and simple.

Facts! Coach is passionate about winning and those kids don’t realize his family’s livelihood is on the line.

DeShon Elliott said the player should be kicked off the team.

Kicked off the team.

Even former Alabama player Reggie Ragland, who played under Davis at Bama, thought the person who recorded the video of Davis was lame.

But whoever recorded that of Bo Davis lame af on Texas!!!

The majority of reactions have been in Davis’ favor, leading most people to feel like the intended goals of whoever recorded/leaked the video backfired.

I don’t know what the end goal was for whoever recorded/posted the video of Bo Davis on Texas bus after Iowa State, but if it was done in an attempt to make coach look bad, then that backfired in a substantial way!

Davis is in his first season as defensive line coach on Steve Sarkisian’s staff. He spent the previous three seasons as a coach with the Detroit Lions. He has also coached at Alabama and previously at Texas under Mack Brown.

If you think there was something wrong with Davis’ tirade, you don’t belong anywhere near team sports played at the high school level or higher. Texas is 4-5, has lost four in a row, and their players absolutely deserved to be chewed out like that. Texas’ issue is that they have a player recording that video of the coach, instead of taking the message to heart and being inspired by it to perform better. Wilson, who is completing his junior year at Episcopal High School in Texas, tweeted “there goes bama in my recruitment” after learning Davis was expected to be fired or resign.

Bo is gone there goes bama in my recruitment pic.twitter.com/gqpibtWZEH

Wilson is rated as the No. 1 player at his position and the top recruit in Texas. Prior to Thursday’s news, Wilson was said to have the strongest interest in Bama and LSU, with interest in Florida State and Texas as well.

Davis, who is Bama’s defensive line coach, was his primary recruiting contact. Davis is reportedly going to be fired or resign over allegations of recruiting violations. An Alabama assistant coach is expected to leave his position over allegations of recruiting violations, according to a report.

The Tuscaloosa News reports that Bo Davis, who coaches Bama’s defensive line, is expected to be fired or resign. The school is conducting an internal investigation while the NCAA has also looked into matters.

Davis was an All-SEC defensive lineman for LSU in the early-’90s.