Kendrick Perkins recently said goodbye to a member of his family, and he used the power of socially media to find him a new home. Earlier this week, the Oklahoma City Thunder center posted several pictures of his dog on Twitter and asked his followers if anyone would like to purchase the English bulldog for $1,500 or best offer.

END_OF_DOCUMENT_TOKEN_TO_BE_REPLACED The home of Oklahoma football coach Bob Stoops was burglarized early Wednesday morning and a vehicle was stolen from the home, Norman police confirmed to Larry Brown Sports.

Stoops’ family was at home when the burglary occurred sometime around 3:30 am. The family was asleep and did not discover the missing items until later in the morning, Norman Police Department lieutenant Cary Bryant confirmed to LBS.

Jake Trotter of ESPN’s Sooner Nation says police have leads in the case.

The Stoops family moved into a new home last year. The home is located about a mile south of Moore, Okla., and was nearby the tornadoes that ripped through the area last month. The spacious home reportedly is about 13,000 square feet. Bob Stoops is one of a number of prominent coaches and athletes that have been doing their part to help the city of Moore, Okla. get back on its feet in the wake of the devastating tornado that swept the area last week. Many have pledged money, while others have pledged time and man power to help the town heal. Some have pledged both. On Tuesday, the Oklahoma coach got his hands dirty.

As you can see from the photo above that Oklahoma senior associate athletic director Kenny Mossman shared on Twitter, Stoops (the gentleman in the red visor) blended in with a crowd of people who were helping clean up debris. Mossman noted that Stoops went about his business for roughly 30 minutes before anyone even realized they were in the presence of a local celebrity. In a separate tweet, Mossman noted that he didn’t think anyone from the school’s athletic department was informed Stoops was going to help.

What’s the point? Some people help just for publicity. Others like Stoops and Kevin Durant seem genuinely disinterested in whether or not people recognize their generosity. Those are the types of people that deserve the attention. 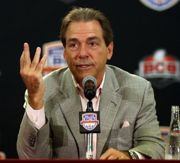 Nick Saban does not have time for Bob Stoops’ anti-SEC remarks. He made that clear when speaking with reporters on Thursday, though he did say it in a nice way.

First, let’s start with Stoops’ comments. During a caravan stop in Tulsa, the Oklahoma coach defended the Big 12 and said all the hype surrounding the SEC was “propaganda.”

“It depends on who you want to listen to,” Stoops told the Tulsa World when asked about the gap between conferences. “Listen, they’ve had the best team in college football, meaning they’ve won the national championship. That doesn’t mean everything else is always the best.

“So you’re listening to a lot of propaganda that gets fed out to you. You’re more than smart enough to figure it out. Again, you can look at the top two, three, four, five, six teams, and you can look at the bottom six, seven, eight, whatever they are. How well are they all doing?”

Saban wasn’t about to let those comments bother him. In fact, he says he did not even hear about them.

“I didn’t even know he said it, so you’re going to have to tell me what he said,” Saban said, via AL.com. “I’ve got more important things to do than sit around and read what Bob Stoops has to say about anything. But I like Bob Stoops, and I respect him as a coach, but I’m really trying to manage our business.”

Saban said he respects the Big 12 and what Oklahoma does, but he did defend his conference.

“I think there’s probably a lot of animosity out there because of the success that we have in our league, but I think that kind of goes with the territory. I understand that. But we certainly respect the great program that they have at Oklahoma and the other good programs that they have in the Big 12.”

I used to firmly be in the “SEC is overhyped” camp and I would complain about an East Coast bias. I thought the Pac-10 was disrespected in conversations. But the truth is the SEC is the best conference in college football. It’s undeniable. They have the most money, the best players, the best resources, the best coaches, and it shows on the field.

You can see his comments around the 3:30 mark.

END_OF_DOCUMENT_TOKEN_TO_BE_REPLACED

Bob Stoops: College athletes are paid quite often, quite a bit and quite handsomely

Oklahoma football coach Bob Stoops is one of the highest-paid coaches in sports — not just collegiate athletics. His roughly $5 million-per-season salary ranks him among some of the most legendary coaches in NCAA, NFL, MLB and NBA history. He has brought a lot of money to the university, but so have the players.

The topic of collegiate athletes being compensated for their work beyond just receiving a scholarship has been heavily-debated over the past several years. Many people feel that schools should just go ahead and start paying the players, while others feel a free education is more than enough. Stoops is a strong advocate for the latter theory.

“You know what school would cost here for non-state guy? Over $200,000 for room, board and everything else,” Stoops said during an interview with The Sporting News. “That’s a lot of money. Ask the kids who have to pay it back over 10-15 years with student loans. You get room and board, and we’ll give you the best nutritionist, the best strength coach to develop you, the best tutors to help you academically, and coaches to teach you and help you develop. How much do you think it would cost to hire a personal trainer and tutor for 4-5 years?

“I don’t get why people say these guys don’t get paid. It’s simple, they are paid quite often, quite a bit and quite handsomely.”

While it might sound silly coming from a guy who makes millions every year, Stoops actually raised a couple of valid points. He probably should have stopped there, because what he said after that was absurd.

“Sam Bradford was one of the most humble and grounded players I’ve ever been around; he got it,” Stoops said. “But I even told him, what makes you think those fans in the stands are wearing No.14 for you? Who says it’s not an old Josh Heupel jersey? I tell our guys all the time. It could be you — or it could be anyone else.

“Those 70,000 fans in the stadium are cheering and buying tickets to see Oklahoma.”

The Yankees don’t have their players names on the back of their authentic jerseys, so why does Robinson Cano get paid when a No. 24 jersey comes off the shelf? How does the team know the person buying it isn’t just a big Tino Martinez fan? It’s one thing to say players are compensated enough with scholarships and special treatment on campus, but let’s not go that far. The school makes millions off people purchasing merchandise that has star players’ numbers plastered all over it. Stoops should have stopped at his first point.

USA Today released its annual list of coaches salaries for all 120 FBS head coaches. As you can imagine, the coaches at the BCS conferences are well paid, and those in the SEC are truly making bank.

The Top 10 highest-paid coaches in the country (based on USA Today’s research) are the following:

Note: data was not submitted by some private universities, so coaches like Lane Kiffin, Jim Harbaugh, and Brian Kelly are not on the list. Kiffin would be in the top five based on reports, and there’s no doubt Kelly would be in the top 10. Harbaugh probably isn’t in this group. Also, Urban Meyer was in the 4 million club but is not on the list because of his resignation.

If you want to look at the most overpaid coaches, you can start with

END_OF_DOCUMENT_TOKEN_TO_BE_REPLACED

If you were reading a while back, you might remember the ongoing series of college coaches as South Park figures. There was the old Big 12 group, the ACC, the SEC, Big Ten, and Pac-10. Naturally, coaching changes have taken place as they do every year. Luckily for us someone has stayed current on their South Park caricatures:

If you’ve watched college football the past few seasons, you have to be asking yourself that exact question right now. Is Bob Stoops no longer a big game coach? And what happened to Oklahoma? After getting smashed by West Virginia last night, Oklahoma is now 1-4 in their last five bowl games under Stoops. Don’t get me wrong — the guy is still a marquee coach who I’d love to have leading my program — but why the losses to end the seasons?

The Sooners got beat by Boise State last year, throttled by West Virginia this year, crushed by USC in the Orange Bowl, and beat by LSU in the Sugar Bowl the previous year. The argument can be made that they’ve overachieved in the regular season — a tribute to Stoops’ ability as a coach — and wound up in a mismatch come January. Only problem is that such reasoning doesn’t suffice when you’re matching up against Boise State and West Virginia who are traditionally inferior programs. So why, why I ask, did Oklahoma go for an onside kick in the 3rd quarter? They had the momentum after cutting the halftime deficit from 14 to 5 points but subsequently shortened the field for West Virginia who punched it in and regained momentum.

It seems to me that there were questionable play calls that fall on Stoops’ shoulder which cost Oklahoma the game. So I ask you, is Bob Stoops no longer a big-game coach? Or is it mere coincidence (or poor timing) that they’ve lost their marquee bowl games recently?