One fan who showed up along the course of the Boston Marathon on Monday brought along a funny Super Bowl sign, perhaps as a motivational tool.

The fan was seen holding a sign showing the score of the Super Bowl prior to New England’s furious comeback that capped off the biggest comeback victory in the history of the big game.

Perhaps that was a reminder to the runners that even though they may have been behind, you’re never out of a competition until it’s all over. 28-3? That was nothing for the Patriots, even in the third quarter of the Super Bowl. We all know the 2014 Boston Marathon was about a lot more than running. Approximately 36,000 runners took part in Monday’s race, which was the most entrants in the 118-year history of one of the country’s most famous events. Victims of the 2014 Marathon bombings and their friends and family were given a chance to heal. For one runner, the end of the race marked the start of a new chapter in life.

A runner named Greg Picklesiner dropped to one knee when he finished the 26.2-mile journey, but not just to catch his breath. Picklesiner was also proposing to his girlfriend Carla, who was there to cheer him on. She said yes.

END_OF_DOCUMENT_TOKEN_TO_BE_REPLACED Rajon Rondo did not play in the Boston Celtics’ season finale against the Washington Wizards on Wednesday, but the star point guard still managed to make a loud statement with his footwear. A day after the one-year anniversary of the Boston Marathon bombings, Rondo wore sneakers that paid tribute to the victims.

The shoes, which Rondo said he was donating to the One Fund after the game, featured the initials of victims written across the sides and top. They also had the date of the attack — April 15, 2013 — and “Boston Strong” etched across the tongue in the form of a runner’s number. Hat’s off to Rondo. Awesome tribute. A 25-year-old Massachusetts man was arrested on Tuesday evening after he placed a backpack containing a rice cooker at the spot of the Boston Marathon finish line on Boylston Street. Edson, who was barefoot and wearing a black veil and makeup, allegedly admitted to police that he had put the backpack there.

According to a police report that was obtained by the Boston Globe, Edson told police that he simply got preoccupied with his dramatic performance.

“I knew what I was doing, it was being conceived in my head,” he reportedly said at the time of his arrest. “It’s symbolism. The performance got the best of me.”

The backpack created a frightening scene for Bostonians on the one-year anniversary of the tragic bombings that took place at the 2013 Boston Marathon. Police were immediately notified of the suspicious backpack and the entire Boylston Street area was evacuated. The bomb squad later detonated the backpack as a precautionary measure and found a rice cooker filled with confetti inside.

END_OF_DOCUMENT_TOKEN_TO_BE_REPLACED The faces of 52-year-old Carlos Arredondo and 27-year-old Jeff Bauman are two of the most recognizable from the tragedy that took place at the Boston Marathon on April 15. On Tuesday night, the two national heroes were invited to throw out the ceremonial first pitch at Fenway Park.

Forget about the fact that Bauman somehow slung in a perfect strike despite the fact that he lost his legs a little over a month ago, which was incredible by the way. What amazes me is that he is able to smile and enjoy himself after living through that type of trauma.

Bauman was one of the people who helped identify the bombing suspects, and he did so almost immediately after waking up from surgery. Arredondo, who lost one of his sons in the war in Iraq and the other to suicide, saved Bauman’s life by clamping his artery shut with his hand to stop him from bleeding to death. These two men are heroes in every sense of the word, and it’s great to see the smiles on their faces and the friendship they have developed. Truly inspiring. 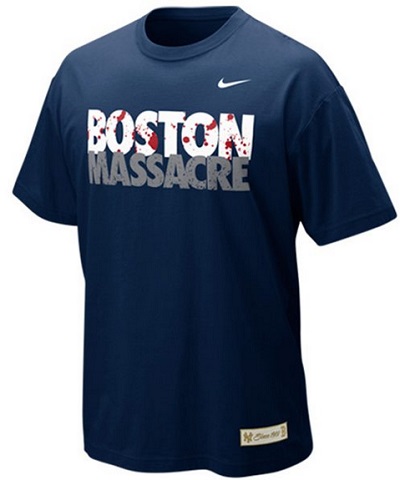 Phoenix Coyotes defenseman Keith Yandle has felt the impact of the Boston Marathon bombings a bit more than many players across the NHL. Yandle is a Massachusetts native who grew up near Boston. Last week, he wrote the words “pray for Boston” across his skates to pay tribute to those affected by the tragedy. He put an even more personal touch on it Saturday night.

Martin Richard, an 8-year-old boy from Dorchester, Mass., was one of three people killed during the explosions on Monday. As you can see from the photo above that Coyotes Sr. Director of Communications Rich Nairn passed along, Yandle wore Richard’s name across the back of his warmup jersey before his team’s game against the Chicago Blackhawks on Saturday night.

“One of my best friends finished four minutes before the bombs went off, and his parents were right at the flags where the bombs went off,” Yandle told FOX Sports Arizona earlier in the week. “My high school coach runs it every year, and he was 500 yards away before he was stopped by the police and just started running in the opposite direction.”

Yandle also said that his wife Kristyn grew up in Richard’s neighborhood, so the loss really hit home for his family. Hopefully gestures like the ones Yandle has been making help the Richard family continue to heal. Like the Bruins before them, the Red Sox spent a good deal of time before their opening pitch on Saturday paying tribute to those who were affected by the Boston Marathon bombings. The organization held a moment of silence for those who lost their lives and gave recognition to the first responders, local heroes and law enforcement.

David Ortiz was then given the floor.

Ortiz, who happened to be making his return from the disabled list, thanked Boston’s city officials and police department. He then decided no one was going to stop him from speaking directly from the heart.

“This is our f****** city,” Ortiz said loud and clear on national television. “And nobody’s going to dictate our freedom. Stay strong.”

If there was ever an appropriate time to drop an F-bomb on live TV in front of 38,000 people, this was it. The city of Boston — and the entire country — has had an incredibly long and difficult week. Maybe Ortiz planned it and maybe he didn’t, but there’s no better player to drop an F-bomb on behalf of a city than Big Papi. Fans across Major League Baseball reacted to the capture of 19-year-old Boston Marathon bombing suspect Dzhokhar Tsarnaev on Friday night. Just before 9 p.m. EST, most news stations were reporting that Tsarnaev had been subdued and taken into custody. While most people expected authorities to eventually capture Tsarnaev, the fact that they were able to bring him in alive is a testament to the tremendous effort both local and federal law enforcement put forth.

As soon as word surfaced that the manhunt had ended, MLB teams began sharing the message with fans on their stadium scoreboards. A number of teams paid tribute to the city of Boston by playing “Sweet Caroline” while others chanted “USA! USA!” upon receiving the news.

The entire nation was able to breathe a collective sigh of relief on Friday night and feel a bit safer going to bed, but it’s important to remember that Tsarnaev’s capture does not change the fact that lives were lost. There’s nothing wrong with celebrating the end of the search and the prevention of further destruction, but the hope is that the entire nation will keep those who died in their thoughts.

Guy went outside for a smoke, saw something wrong with his boat, found bloody body of bomb suspect The story of how Dzhokhar Tsarnaev was found hiding in a boat in the backyard of a Watertown, Mass., home is every bit as wild as the manhunt.

Dave Henneberry’s family told the New York Daily News that Henneberry went outside to smoke and get some air after the city curfew was lifted at 6:00 p.m. on Friday. While outside, Henneberry apparently noticed a few things wrong with his boat; the tarp was dislodged and one of the straps was cut.

Henneberry decided to get a ladder to investigate.

After climbing the ladder to look inside the boat, Henneberry saw a pool of blood and what he thought was a body. It turned out to be that of Tsarnaev.

Henneberry jumped off the ladder, ran inside and called 911. Police converged on the home shortly thereafter, a shootout ensued, and Tsarnaev was taken in custody at 8:43 p.m., less than three hours later.

Below is a crazy video via Barstool Sports showing the shootout: