Brad Marchand had one of the worst shootout attempts you will ever seen in an NHL game during the Boston Bruins’ loss to the Philadelphia Flyers on Monday, but he isn’t about to sit back while some fan rips him for it.

With the Bruins needing a goal to keep the shootout going, Marchand overskated the puck and grazed it with his stick. Because he touched the puck, officials ruled that his attempt counted and the game was over. Likely in response to being trolled, Marchand tweeted a photo on Tuesday that showed him kissing the Stanley Cup.

One of Marchand’s followers, whose profile says he is a beer league hockey player, took that as an opportunity to heckle Marchand about not being able to get the puck on his stick. Marchand responded by calling the guy a “peasant” and saying “you pretend to be me in your back yard.”

Your shootout is in your driveway not the NHL peasant. You pretend to be me in your back yard dream big bud

Marchand would probably be better off ignoring the noise after such an embarrassing blunder, but that has never been his style. We’ve seen him clap back on social media in the past when a rival brought up his affinity for licking the faces of opposing players, so he’s willing to defend himself over pretty much anything. The Boston Bruins were dealt a major blow in Game 4 of the Stanley Cup Final Monday night when Zdeno Chara left with an injury and was unable to return, and Brad Marchand says the captain would have come back if doctors allowed it.

Chara took a puck to the face after blocking a shot early in the second period of Boston’s 4-2 loss to the St. Louis Blues. He was bleeding from the mouth and skated off the ice into the dressing room. The 42-year-old later returned to the bench wearing a full fishbowl mask, but he never got back onto the ice.

According to Marchand, Chara wanted to get back into the game but had to follow doctor’s orders.

Marchand on Chara: "If it wasn't for the doctor, he would've played that game. He's that kind of guy that you're going to have to kill him to keep him off. He's an absolute leader and those things you gain respect for him every single day with what he's willing to go through."

While the Bruins have not specified, it sounds like Chara may have suffered a broken jaw. His status for Game 5 is uncertain. Chara has taken a beating in the playoffs this year, as he also missed Game 4 of the Eastern Conference Final with a lower body injury and suffered a bloody wrist while blocking a shot earlier in the series against St. Louis.

The Bruins may still be without defenseman Matt Grzelcyk in Game 5, as he has been out since suffering a head injury on an illegal check in Game 2. If neither Chara nor Grzelcyk can play, Boston will have its hands full defensively.

Brad Marchand is willing to think ahead to what he’d do if his Boston Bruins win the Stanley Cup this year, and let’s just say he has a well-thought plan already.

The controversial Boston forward has three things he’d like to put in the Cup if the Bruins manage to see off the St. Louis Blues in the upcoming finals, and it’s a rather diverse array of things.

Brad Marchand, asked three things he'd like to put in the Stanley Cup: "Cinnamon Toast Crunch, a baby and a lot of alcohol."

It doesn’t sound like the worst day for a lot of people.

Marchand was a member of the 2011 Bruins team that claimed the title, so he’ll have some experience in this regard if he and his teammates get the job done. We bet he’d be willing to talk at a lot more length about it if it happens. 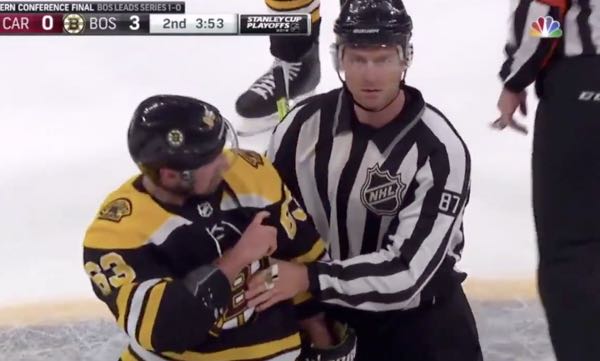 Brad Marchand is known for being arguably the biggest instigator in the NHL, and he was back at it again during Game 2 of the Eastern Conference Finals between the Boston Bruins and Carolina Hurricanes on Sunday.

Marchand took Hurricanes captain Justin Williams down with a high stick late in the second period, and the referees only called a penalty when Williams got in Marchand’s face and yanked his chin strap. Marchand then pointed to the penalty box and taunted Williams by making a “C” with his hand and putting it up to his chest.

Brad Marchand pesters Justin Williams into a penalty — then signals the Carolina captain to the box. pic.twitter.com/0OPveb224V

In other words, Marchand was ridiculing Williams for taking a dumb penalty as his team’s captain. It proved to be costly, too, as the Bruins scored on the power play to take a commanding 4-0 lead into the third period.

When compared to some of the things Marchand has done to opponents in the past, that was nothing. Williams is just lucky Marchand didn’t lick him.

Why Brad Marchand was so terse in interview with Kyle Bukauskas

Brad Marchand did his best Russell Westbrook impression in an interview after the Boston Bruins clinched their series with the Columbus Blue Jackets on Monday night, but there’s actually a reason for it.

Marchand was interviewed by Sportsnet’s Kyle Bukauskas after the Bruins beat the Blue Jackets 3-0 to advance to the Eastern Conference Finals. He gave very brief answers and did not seem too interested in engaging in the interview:

Marchand probably is holding something against Bukauskas, who took a jab at him at the end of an interview earlier in the series:

This is where it started. pic.twitter.com/ScIPJsbpsy

Bukauskas was referencing an incident between Marchand and Cam Atkinson in Game 1 of the series:

Is it childish of Marchand to hold the joke against Bukauskas? Maybe. But Marchand’s seemingly odd interview does have some background.

Watch: Brad Marchand hits Scott Harrington in back of head

Brad Marchand was up to his dirty tricks yet again.

During the Boston Bruins’ Game 3 loss to the Columbus Blue Jackets on Tuesday night, the Bruins star was caught punching the back of an opponent’s head. Take a look at what he does to Scott Harrington:

Brad Marchand punching the back of Scott Harrington's head while Harrington is down on his knees. pic.twitter.com/3JYYH8o89O

Marchand avoided a penalty despite the cheap shot on Scott Harrington. However, he was called for hi-sticking in the second period, which led to a power play goal that made it 2-0 Columbus.

Whether it’s licking opponents or unnecessarily pummeling them, Marchand has a way of attracting attention for his antics.