Brandon Belt deflected the disappointment of losing the Final Vote by cracking a joke.

The San Francisco Giants first baseman was among the five finalists for the Final Vote to determine the final spot on the NL All-Star team. He was beaten out by Milwaukee Brewers first baseman Jesus Aguilar, who won the vote.

Belt then cracked a joke about the election being rigged by the Russians, which was a reference to the 2016 presidential election.

Brandon Belt on no All-Star nod: “I was told Russia actually interfered with this election.” Thanks the fans who voted, teammates and Giants’ social media team.

Though Belt is having a good season with his .900 OPS, Aguilar with his 1.000 OPS is even more deserving. The fans seem to have gotten this one right. Max Muncy, Trea Turner and Matt Carpenter were the other Final Vote candidates in the NL.

END_OF_DOCUMENT_TOKEN_TO_BE_REPLACED Using a defensive shift against left-handed hitters can often be an advantage, but it burned the Arizona Diamondbacks on Tuesday night and cost Patrick Corbin a no-hitter in the process.

Corbin had not allowed a hit through 7.2 innings against the San Francisco Giants until Brandon Belt reached on an infield single. Belt seemed fooled by a breaking ball and checked his swing, making soft contact with a ball that dribbled towards third. He was able to beat it out.

Had the infielders been playing in their normal spots instead of being shifted for Belt to pull, that probably would have been a routine play.

Corbin issued a walk in the fourth and allowed the hit to Belt, and that was it for the game. He pitched a complete game one-hit shutout and allowed just two baserunners while striking out eight. Not a bad night’s work. 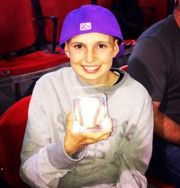 Brandon Belt hit one of the most important home runs of his career on Friday night. Believe it or not, the San Francisco Giants first baseman’s blast to right field came during a rehab assignment with the Triple-A San Jose Giants. So what was so special about it? Just ask Lyndsey Dworkin.

Dworkin, a 12-year-old cancer survivor, threw out the ceremonial first pitch at Municipal Stadium on Friday. She chose to wear a T-shirt with Belt’s name on the back when she took the field, and Belt rushed to meet her as she was walking off. He then decided to make her a promise.

“I’m going to hit a home run for you,” Belt said he told Dworkin, via Daniel Brown of the San Jose Mercury News.

Lindsey has undergone 31 bouts of radiation and nine rounds of chemotherapy to treat a brain tumor. She was so thrilled to meet Belt that she didn’t even have time to get hung up on his promise. In fact, she forgot all about it until a team employee brought her the home run ball after Belt drove it over the right field wall in the first inning.

“I kind of forgot about it,” Dworkin explained with a laugh. “That’s when I said, ‘Oh yeah, he did say that.”

Belt signed the ball “To Lyndsey, my good luck charm.” He has also invited the Dworkin family to visit AT&T Park when he returns to the majors and join him on the field for batting practice.

Lyndsey, an avid soccer player, attended a San Jose Giants game with her mother Kristine on Breast Cancer Awareness night last season. She was interested in the pink jerseys that were being auctioned off for charity, and chief marketing officer Juliana Paoili later presented her with one after hearing her story.

Now, 1 1/2 years after being diagnosed with a cancerous brain tumor, Lyndsey is expected to make a full recovery. We’re glad to see she has made a new friend along the way. According to CSN Bay Area, Belt was asked about the Dodgers spending loads of money over the offseason and responded “All I can say is, you can’t buy chemistry.”

Since purchasing the Dodgers last March, the new ownership group has spent over $600 million on players. They took on $262.5 million in contracts when they acquired Carl Crawford, Adrian Gonzalez, Josh Beckett and Nick Punto from the Boston Red Sox. They acquired Hanley Ramirez from the Miami Marlins and the $31.5 million he is owed over the next two years. They gave Andre Ethier a five-year, $85 million extension in June. They signed Zack Greinke to a seven-year deal worth up to $158 million. They spent $61.7 million to sign Korean pitcher Hyun-Jin Ryu (including the posting fee). They signed Cuban defector Yasiel Puig for $42 million.

The Dodgers have a vastly improved team, but they still failed to reach the postseason last year even after acquiring many star players.

The Giants, meanwhile, got an MVP season from Buster Posey, a super postseason performance from Pablo Sandoval, and an All-Star performance from Melky Cabrera (before he was suspended for PEDs). Sergio Romo was unstoppable in the bullpen, while Matt Cain, Madison Bumgarner, and Ryan Vogelsong all were excellent throughout the year.

By winning two World Series in the last three seasons, San Francisco proved you don’t need a roster full of high-priced All-Stars to win a championship. However, the Giants did have the eighth-highest payroll in baseball last season, so it’s not like they’re a struggling franchise.

Earlier this week we told you that a baby giraffe was born at Six Flags Discovery Kingdom Bay Area last Friday. The folks in charge at Six Flags decided to name the giraffe after Giants rookie Brandon Belt. Incidentally, Belt’s nickname with the Giants is “baby giraffe.” Yup, it all works.

Well like we told you, the two were set to meet this week and that happened on Thursday. Peep the pics of the two giraffes courtesy of The Veteran and the Rook via Big League Stew:

Human Brandon Belt should be proud because for the time being he’s actually taller than his mammalian counterpart. See the image below:

END_OF_DOCUMENT_TOKEN_TO_BE_REPLACED

Giants rookie Brandon Belt has been nicknamed “baby giraffe” by the team’s broadcasters. The nickname is a reference to Belt’s goofy style and all around awkwardness. In that regard, he is not too dissimilar from a baby giraffe. Now, thanks to some creative marketing, he has a real life giraffe named after him.

The folks at Six Flags Discovery Kingdom decided to name a male giraffe calf that was born Friday “Brandon Belt.” The calf is already 6’2″ but is temporarily overshadowed by the real Brandon Belt who is 6’5″.

The real giraffe and the ballplayer apparently will meet sometime this week. I’m sure the giraffe will be charmed.

Thanks to Sports by Brooks Live for the story