Cal’s special teams a disaster in loss to rival Stanford Cal’s special teams were a disaster in the team’s 24-23 loss to rival Stanford in “Big Game” on Friday.

Cal muffed a punt return and had two kicks blocked in the defeat. The first blocked kick occurred on a 32-yard field goal attempt just before halftime with the game tied at 10. That would have given Cal a 13-10 lead.

The second blocked kick was even more painful. Cal scored a touchdown in the final minute to make it 24-23. But then they had their extra point attempt blocked.

BLOCKED!@StanfordFball blocks the extra point with under a minute left in the Big Game to preserve their lead pic.twitter.com/khDuKB6PXp

On top of the special teams errors, Cal also lost an interception due to a holding penalty, and they lost a fumble.

The victory gave Stanford its first of the season and kept Cal winless at 0-3.

The situation in the Pac-12 is getting more embarrassing by the day.

The same conference that shut down its season all while several major conferences continued to play football as scheduled had one of its six games canceled for its debut week.

The Cal vs. Washington game was canceled due to — get this – one, yes one – positive COVID-19 test. The positive test is on the defensive line according to Jon Wilner, and resulted in the whole position group being quarantined.

Wilner says that the Berkeley Department of Health called for the game’s cancelation due to quarantine rules involving those who are part of contact tracing.

Cal coach Justin Wilcox said Thursday that the other players tested negative but the health department still won’t allow them to play.

“It’s ridiculous,” a conference source told Wilner. “They did everything possible protocol-wise to avoid this exact situation (position group quarantined) and then were told what they did was not enough.”

Ridiculous is the completely correct term for this nonsense. You cancel an entire game over one positive COVID case, even though those involved in contact tracing tested negative? Across the Bay, the 49ers were able to play in Santa Clara on Thursday night despite having multiple players on the COVID list.

Berkeley’s policy is unnecessarily extreme and every bit as bad as the Big Ten’s unbelievable 21-day absence policy following a positive COVID-19 test. The Pac-12 is doing lasting damage to its already suffering football brand.

Under Armour continues to attempt to escape its west coast college apparel deals, and the schools involved are vowing to fight it.

The brand is reportedly seeking to get out of its deal with Cal, the second Pac-12 school with whom Under Armour is trying to sever its business ties. Michael Smith of Sports Business Journal reported Saturday that the brand was eyeing the Cal deal for possible cancellation, and both Cal and UCLA have been removed from the brand’s website.

Under Armour's current list of programs on its web site after scraping existence of UCLA + Cal it appears earlier today pic.twitter.com/fIDbvzdJGA

On Sunday, Cal’s athletic department released a statement saying that they had no reason to believe they had violated the terms of the deal on their end, and that Under Armour did not have grounds for termination.

Statement from @CalAthletics on its @UnderArmour partnership. Cal is saying the same thing UCLA is – that they haven't violated their agreement.

Under Armour inked UCLA and Cal within just a few months back in 2016. A *very* different time for the company #SportsBiz pic.twitter.com/asx0U6If6d

This is threatening to turn into a messy situation. Under Armour signed a 10-year, $86 million deal with Cal in 2016. That was around the same time they made an even bigger deal with UCLA — another deal Under Armour is trying to get out of.

Under Armour’s financial situation was not great even before the pandemic badly hurt global business. It seems as though the brand is trying to get out of some bad deals that they overpaid for citing the fact that they are not receiving marketing benefits that were part of the deal. Expect both schools to do everything they can to prevent this from happening, perhaps even taking legal action to try to uphold the contracts. Ole Miss was not happy with the officiating toward the end of its heartbreaking loss to Cal on Saturday, but the Pac-12 conference believes the officials handled the situation the right way.

The Rebels were trailing 28-20 and had 3rd-and-goal from the Cal 3-yard line with just 22 seconds remaining and no timeouts. Quarterback John Rhys Plumlee threw on 3rd down and found receiver Elijah Moore at the goal line, but the official marked him short. The play was, for some reason, not reviewed, so Ole Miss had to hurry to the line and attempt a QB sneak with time running out. They were stopped short again.

It certainly seemed like the game should have been stopped after Moore’s catch to determine if he broke the plane, but it was not. There was also some question about the 4th down sneak being reviewed, but the Pac-12 says the sequence was handled correctly.

Not likely to appease Ole Miss fans but Pac-12 says all was good at end of Cal's controversial win in Oxford. pic.twitter.com/T5t4U02cND

There’s a difference between making the right call and the right decision. Even if the calls were correct, Moore was close enough to the goal line to warrant at least taking a closer look at the play. You can see the entire sequence here.

While Ole Miss is mostly to blame for mismanaging the clock after being stopped short on 3rd down, you can understand why they were upset that the play was not reviewed.

Aaron Rodgers signed a massive contract extension with the Green Bay Packers last offseason that guarantees him around $100 million, and he is using some of that money to improve the football program that helped make him an NFL MVP.

On Tuesday, the University of California, Berkeley announced that Rodgers has made a seven-figure donation to the football program. The money will be used to improve the football team’s facilities and create the Aaron Rodgers Scholarship Fund.

“I’m pleased and proud to make this gift to support Cal football,” Rodgers said in a statement. “My years at Cal were among the best years of my life. My time in Berkeley created lasting, unforgettable memories. Coach Wilcox was on the coaching staff when I was a Bear, and I am excited about the team’s direction with Justin pointing the way. He is a tremendous football coach and an even better role model for his players. I hope that my contribution can help him move this program forward.”

Rodgers has been very generous since signing his new deal, as he also pledged $1 million to the relief efforts for the devastating California wildfires last year. That inspired others — including some major corporations — to make similar donations on his behalf.

Cal is looking to get back on track after going 12-13 in its first two seasons under head coach Justin Wilcox. Rodgers led the team to an 18-8 record in his two years at the Golden Bears’ starter in 2003 and 2004.

The first half of Wednesday’s Cheez-It Bowl between Cal and TCU was about as sloppy as it gets.

During about a four-minute stretch from the end of the first quarter to the beginning of the second, the Golden Bears and Horned Frogs traded interceptions on four straight possessions. Here’s a look at three of the interceptions:

ESPN went to commercial showing 3 of the 5 INTs in this game pic.twitter.com/UKkbBugg7Q

The four straight interceptions actually made it five for the game at that point, as TCU had one on their second possession. Watching the game was particularly maddening, because the fourth and fifth ones came on the second play of the offensive series, which meant they traded turnovers a minute apart.

There is something that explains the turnovers besides just there being strong defenses. TCU was on their third-string quarterback — Grayson Muehlstein — who was making just the second start of his career. Despite his inexperience, you’d like to see more competent quarterback play than this.

Reports: Cal negotiating with Justin Wilcox to be head coach Cal may have a replacement for Sonny Dykes in the works.

According to a few reports, the Golden Bears are in contract talks with Wisconsin defensive coordinator Justin Wilcox for the job.

Wilcox, 40, helped the Badgers to the fourth-best scoring mark in the country on defense. He played at Oregon and served as a defensive coordinator at Washington and USC prior to Wisconsin.

Cal is coming off a 5-7 season, but went 8-5 the year before with Jared Goff at quarterback.

UCLA, Cal get into fight after game (Video)

UCLA beat up on Cal 40-24 Thursday night at the Rose Bowl, and the two teams got into it after the game.

There was a scuffle after time ran out as the teams met in the middle for handshakes and whatnot:

The raucous caused an ESPN cameraman to drop the camera: 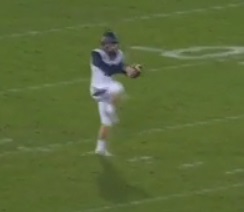 Cal was getting blown out by USC 28-2 on Thursday night, so they figured why not try a fake punt?

Maybe the idea to attempt the fake was a good one, but the execution was just an embarrassment. Punter Cole Leininger did some sort of half-hearted fake and then tried to throw a pass, which fell incomplete.

Did Leininger forget which leg he kicks with? Was he just doing a knee-up drill demonstration for us? I have no idea, but that was just awful.

Cal rallied to make it a 38-30 final, but USC won the game handily. Cal football coach Sonny Dykes lost in his debut with the Golden Bears on Saturday night, and he was upset with Northwestern for seemingly employing some shady tactics.

The No. 22-ranked Wildcats won 44-30 in a game that was much closer than the score indicates. A number of Northwestern’s defensive players kept getting hurt and leaving the game with injuries, only to return later and get hurt again. It seemed like an obvious attempt to slow down Dykes’ fast-paced “Bear Raid” offense, and it worked.

Northwestern coach Pat Fitzgerald brushed aside the faking accusations, but Dykes spoke openly about what he thought was going on.

“It affected it a lot,” Dykes said after the game of Northwestern’s constant injuries, via the AP. “You know it was just unusual, it seemed like every time we had a first down they would have an injury. I hadn’t seen that, didn’t expect to see that, was disappointed that I saw that but that’s the way it goes sometimes.”

In the video below, you can see Northwestern players go down with supposed injuries on four occasions. In one Cal drive with around three minutes left in the third quarter, Northwestern went down in three of four consecutive plays (all seen in the video). First it was No. 92 Will Hampton. Two plays later No. 44 Chi Chi Ariguzo went down. On the next play, Damien Proby went down. In a 4th-quarter drive, Hampton went down again with a supposed injury.

You can watch it all below, along with Dykes’ fiery reaction: