Chipper Jones implies Jose Bautista is not liked around baseball

MLB chief baseball officer Joe Torre is expected to announce disciplinary action against those involved in Sunday’s brawl between the Toronto Blue Jays and Texas Rangers as soon as Tuesday. While some have predicted a lengthy suspension for Rougned Odor because he actually landed a punch, others want to see the league come down just as hard on Jose Bautista.

On Tuesday morning, MLB Network’s Jon Heyman said he is surprised by how many baseball people have shown support for Odor. Chipper Jones, who spent 19 years in the league, responded by implying that people don’t like Bautista.

@JonHeyman May wanna look more into the personalities involved. Shouldn't be surprised at all.

Those with the “old-school” mentality took serious offense to Bautista unleashing this vicious bat flip in the postseason last year. Former nine-time MLB All-Star Goose Gossage blasted Bautista for the stunt, and there are plenty of other people who feel the same way. Jones hinted earlier this week that he is among them.

Regardless of how many people like or dislike Bautista, Odor is going to be suspended. You can’t just deck a guy in the jaw (video here) and expect to pay a fine. 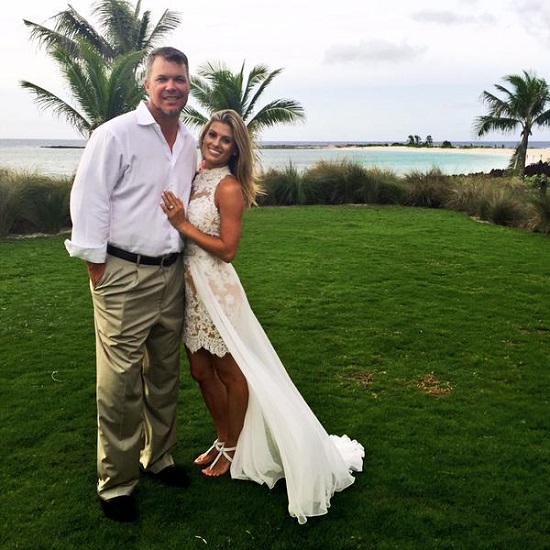 Former NL MVP Chipper Jones got married on Monday in the Bahamas to Taylor Higgins, a woman he has been dating for the past few years.

Jones and Higgins first began dating in 2012 from what we know. She posed for Playboy Cyber in 2010 and used to go by the stage name of Lexi Ray Taylor.

Jones has been married three times now. He married his first wife Karin Fulford in 1992 and had a child with her, but she filed for divorce after finding out he cheated on her. He married his next wife Sharon Logonov in 2000 but they separated in June 2012 and divorced later that year in November (they had three children). I don’t even want to imagine what Chipper’s alimony and child support payments look like.

Since then, Chipper has been dating Higgins and getting into trouble with his Twitter activity.

Head to Page 2 for some more photos from their wedding. Former Atlanta Braves slugger Chipper Jones is known to do some pretty dumb things on Twitter from time to time, and the argument he had with one of his followers early Thursday morning was no exception.

Twitter user @thatgrayboy decided to call out Jones by claiming that Chipper snubbed him out of an autograph when he was 8 years old. Jones took the accusation personally and things escalated in a hurry. It wasn’t until @thatgrayboy brought Chipper’s girlfriend into it that the former eight-time All-Star really went off.

END_OF_DOCUMENT_TOKEN_TO_BE_REPLACED Chipper Jones is the latest athlete to take the Twitter apology route after he jumped on the widely-debunked conspiracy bandwagon this weekend.

Jones apparently learned of some new information regarding the 2012 Sandy Hook shooting (perhaps he saw this video?) and sent out a tweet Friday indicating he believed the shooting was a hoax: As you might imagine, that one got a little more attention than his tweets about deer hunting and beer drinking. The Twitter police was quickly out in full force.

Cristina Hassinger, daughter of murdered Sandy Hook principal Dawn Hochsprung, responded with a fiery tweet of her own.

.@RealCJ10 Come for dinner. You can meet my grandmother-less children and I’ll show you my mom’s clothes riddled with bullet holes.
— cristina hassinger (@chass63) February 7, 2015

Jones later deleted the tweet. On Saturday, he offered the following apology.

It was irresponsible of me to do that and will not happen again. Please accept my heartfelt apology to those who were hurt or offended.

So who may have been Chipper’s “credible” source? We know of one former teammate who likely frequents the sites that peddle these ridiculous conspiracy theories. Although they’ve claimed to have buried the hatchet, maybe he was setting Chipper up!

Kendall Jones the hunter gets support from Chipper Jones Many of you have probably heard of Kendall Jones by now. Jones is a 19-year-old Texas Tech cheerleader who has been hunting big game in Africa with her father for years. She recently started posting photos of her kills on Facebook, sparking outrage across the globe.

Jones, who grew up on a ranch in Texas, has taken down everything from lions to elephants. She also recently tranquilized a white rhino and claims to have assisted a veterinarian with taking blood samples and administering antibiotics. All of this information is available on Jones’ Facebook page.

In addition to the backlash she has received, Jones has drummed up support from thousands of hunting enthusiasts. On of them is former Atlanta Braves star Chipper Jones.

END_OF_DOCUMENT_TOKEN_TO_BE_REPLACED END_OF_DOCUMENT_TOKEN_TO_BE_REPLACED

Chipper Jones started a forest fire in his backyard Chipper Jones was just trying to do something helpful around the house when he cleaned out his fireplace on Wednesday, but he inadvertently ended up starting a mini forest fire in his backyard.

The former Atlanta Braves legend tweeted about the entire affair. We’ll let him take it from here:

Lol. Tried to do my daily chores and cleaned out the fireplace. Went and dumped the ashes. Alls good right? Nope. Set the woods on fire! Ugh

I got firefighters all over my place! Thank you Roswell Fire Dept.

Chipper’s girlfriend, Taylor Higgins, tweeted a picture of how it looked:

Come on, Larry Wayne, you should know better. During the playoffs, Atlanta Braves players decided to boycott a first pitch that was thrown out by Chipper Jones. Rather than his ceremonial pitch being caught by a former teammate, Jones had to throw it to Atlanta’s mascot. The reason? Chipper had gone on the radio earlier that day and predicted the Los Angeles Dodgers would win their NLDS series against the Braves in four games — which, by the way, is exactly what happened.

In any event, Chipper clearly has not gotten over his former teammates snubbing him. On Sunday, he took a quick jab at Tim Hudson, who recently signed with the San Francisco Giants.

What if Huddy takes the mound for the first time in SF next yr, and no one is there to catch the 'first pitch'? Maybe the mascot? #karma

Chipper was obviously planning on using that one for a while, because it seemed like he forced the joke. He later tweeted that he was just kidding and wishes Hudson the best with his new team.

When it comes to Twitter, Jones simply can’t help himself. He has done everything from defending former Rutgers basketball coach Mike Rice to urging fans to boycott games that are umpired by a certain ump. In August, Chipper said he was quitting Twitter because he couldn’t take the trolling anymore. He probably should have followed through with that.

The Atlanta Braves invited Chipper Jones to throw out the ceremonial first pitch before Game 1 of their NLDS matchup against the Los Angeles Dodgers last week. The recently-retired Jones was the perfect candidate to kick off his former team’s postseason run, but many found it bizarre that his pitch was caught by the Braves’ mascot. There was apparently a reason for that.

According to the NY Post, the Braves players were upset with Jones after he went on the team’s flagship station, 680 The Fan in Atlanta, earlier that day and predicted the Dodgers would win the series in four games. Jones sent out a couple of tweets after the game acknowledging that he was snubbed.

Wanna thank the Braves organization for having me throw out the first pitch to the mascot tonite. Quite sure that's never been done before!

Nor will it EVER happen again!

Wait, Chipper is still on Twitter? I thought — never mind. You can’t fault Jones for trying to be objective and giving an honest prediction. And what do you know, the Dodgers won the series in four games on Monday night with Clayton Kershaw pitching on four days rest. LA simply proved to be the deeper and more talented team, which is something Chipper and many others could see going into the series. I’m sure there will be more ceremonial first pitches for him to throw to actual players in the future.

Chipper Jones quits Twitter because of ‘hate’ and ‘trolls’

Former Atlanta Braves star Chipper Jones has been one of the more outspoken athletes on Twitter over the past year or so, but we may have heard the last of him. On Wednesday morning, Jones announced that he is done tweeting.

No more twitter for me. Said I'd do it for one year and the time is up. Too much hate and too many trolls. Much love to Braves country! Xo

The timing of the decision is interesting, as Jones was animated in calling out Bryce Harper during Tuesday night’s dust-up between the Braves and Washington Nationals. Chipper apparently thought that Harper admired his home run a bit too much in the third inning, which is why Atlanta pitcher Julio Teheran hit him in the fifth.

Some of the “trolls” Jones is referring to may have come at him after that tweet. In the past, Chipper has encouraged followers to boycott umpires and shared other controversial opinions. He even defended Rutgers coach Mike Rice after Rice was fired for chucking basketballs at his former players and swearing at them.

It will be interesting to see if Chipper sticks to his guns on this. He has sent some tweets in the past that are blatantly aimed at riling up his followers, so he had to have expected some “hate” coming back at him. In any event, he is not the first prominent sports figure to quit Twitter this year and probably won’t be the last.