The Texas Longhorns were limited to a 25 percent fan capacity at home games in Austin last football season, but they’re aiming for 100 percent this fall.

Texas athletic director Chris Del Conte tweeted in response to a fan inquiry on Wednesday. The fan asked whether Texas was planning on 100 percent fan capacity for football games in the fall, assuming the majority of the country is vaccinated by then.

Del Conte said that was the plan.

The fall is several months away, and so much could happen by then. But it wouldn’t be a stretch to say most people would love to have COVID-19 under containment to the extent that 100 percent fan capacity were possible. Already this year we’re seeing more and more sports venues open up to limited fan attendance. Texas throttled Texas Tech 49-24 on Friday to finish the regular season 7-5. After going 10-4 last season and beating Georgia in the Sugar Bowl, there was optimism about Texas being “back” and ready to return to elite status. Instead, they returned to mediocre form.

Del Conte said Friday that they are “disappointed” because they were expecting more.

Texas AD Chris Del Conte confirms he personally won’t make assistant changes. That’s up to Tom Herman. “We’re all disappointed because of expectations. We all had great expectations.”

Del Conte’s statement seems to second the notion that Tom Herman will soon make changes to his coaching staff.

Texas’ 5-2 start to the season may not have been what they wanted, but it was understandable considering LSU and Oklahoma are two of the best teams in the country. However, the ensuing defeats to TCU, Iowa State and Baylor are where Herman really lost it. Those are not games they should have lost this season, which explains the disappointment. Texas athletic director Chris Del Conte released a statement on Monday afternoon in response to accusations from LSU and Louisiana Tech that the air conditioning was not working in the visitor’s locker room at Darrell K Royal – Texas Memorial Stadium.

LSU Tigers head coach Ed Orgeron said on Monday that the air conditioning was not working despite game temperatures being near 100 degrees. LSU won Saturday’s game 45-38 and earned a spot in the top five of the AP rankings accordingly, but it wasn’t easy. Several players went down with cramps throughout the game, with the heat and hydration likely playing a factor.

Here is the statement from Del Conte:

Official statement from @_delconte on the visitor locker room. pic.twitter.com/zSdZcfSfSO

“The comment today about lack of air conditioning in our visiting locker room is the first we’ve heard of any issues in that area. We provide one of the best visitor setups available and are proud of the efforts we put forth in hosting our guests. Our facilities staff did not receive any complaints from either Louisiana Tech or LSU, and we’ve confirmed that our air conditioning in the visiting locker room is in good working order,” Del Conte’s statement said.

Not hearing a complaint from someone does not mean it wasn’t working at the time.

Whether it’s Texas or LSU/Louisiana Tech, it seems one side is not telling the truth in the matter. Which side do you believe?

No, Texas AD Chris Del Conte was not ejected during game 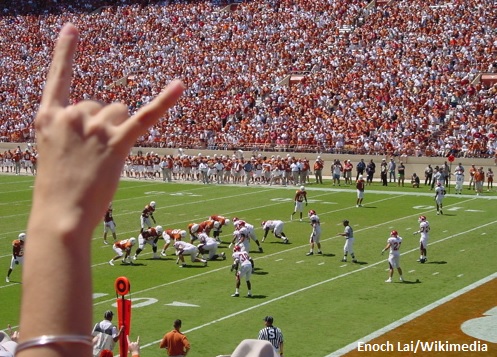 No, Texas athletic director Chris Del Conte was not ejected from Saturday night’s game between the Longhorns and Texas Tech.

There was some buzz on Twitter — started by a few reporters — saying that Del Conte had been tossed from the game by a side judge.

Texas AD Chris Del Conte was ejected from the game by a side judge. He was escorted off the field.

Del Conte later addressed reporters and told them he was not ejected and that he had just walked to the other side of the field.

Del Conte tells me he wasn’t ejected. People were yelling on Texas sideline. Ref thought it was him. CDC said, “I just started walking to the other side.” He sure happy about the win.

Del Conte had a lot to celebrate as his team pulled out a 41-34 win over Texas Tech to avoid the upset. The Longhorns are now 7-3 and have turned things around since consecutive losses to Oklahoma State and West Virginia.