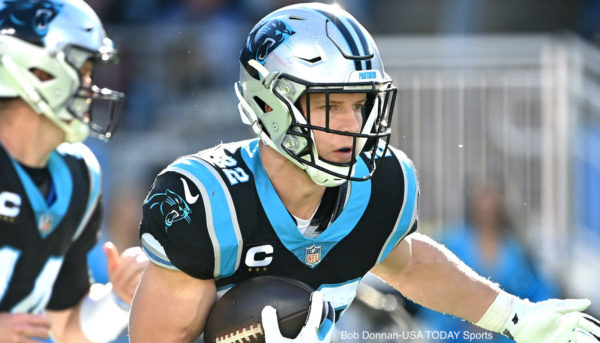 There has been some suggestion that the Carolina Panthers might be willing to listen to trade offers for running back Christian McCaffrey. That may be true, but he will not be easy to acquire.

Multiple teams have reached out and asked the Panthers about McCaffrey, according to Jonathan Jones of CBS Sports. The Panthers are reportedly asking for a first-round pick as well as another piece in exchange for McCaffrey.

On the surface, that asking price may make a McCaffrey trade look much less likely. His four-year, $64 million deal kicks in starting in 2022, and injuries have robbed him of the majority of the last two seasons. No one doubts that McCaffrey is a weapon if healthy, but he’s also expensive in terms of his cap hit and what it will take to acquire him.

Reports earlier in the offseason suggested the Panthers were at least willing to listen on McCaffrey. Unless they are willing to shift their asking price, that may be all they end up doing.

Christian McCaffrey has not been able to stay healthy since he signed a massive contract extension prior to the 2020 season, and it is fair to assume that has been a source of frustration for the Carolina Panthers. If another team wants to take the star running back off their hands, the Panthers are reportedly willing to listen.

Joseph Person of The Athletic wrote on Friday that the Panthers will listen to offers for McCaffrey should any come in this offseason. However, Person doubts whether teams would be willing to give up much under the circumstances.

McCaffrey signed a four-year, $64 million deal with Carolina in 2020. He is still owed $44 million over the next two seasons. While he is undoubtedly one of the best offensive players in football, his injury history simply cannot be ignored. The 25-year-old has played in just 10 games over the past two seasons.

McCaffrey missed several games early this season with a hamstring injury. He appeared to blame the NFL’s scheduling for that. He then hurt his ankle after returning and was shut down for the year.

Unless the Panthers decide to eat a large portion of his contract or take on an equally inflated deal, it’s hard to imagine McCaffrey being moved this offseason.

Christian McCaffrey suffered an ankle injury during Sunday’s loss to the Miami Dolphins that initially did not look serious, but it is one that will keep the Carolina Panthers star out for the remainder of the season.

The Panthers announced on Monday that they have placed McCaffrey on injured reserve. Since this is the running back’s second stint on IR, he will not be eligible to return this season.

McCaffrey missed several games earlier in the year with a hamstring injury. He seemed to blame the NFL’s scheduling for that, but injuries are certainly nothing new for him.

McCaffrey missed 13 games last season due to injuries. He played in seven this year.

Panthers head coach Matt Rhule indicated on Monday morning that McCaffrey’s latest injury was not serious. Either he was not being truthful, or more information came to light after he met with the media.

Carolina Panthers star Christian McCaffrey did not play in the second half of Sunday’s loss to the Miami Dolphins after he suffered an ankle injury. That has led to concern about him missing more games, but the latest injury does not sound that serious.

McCaffrey rolled his ankle during the first half of Sunday’s game. Panthers head coach Matt Rhule told reporters on Monday that X-rays came back negative. He also said he believed McCaffrey could have returned to the game in the second half after getting his ankle taped, but the Panthers decided to play things safe.

McCaffrey was spotted with a walking boot on his foot after the game. That could also have been precautionary. The good news is the Panthers have a bye in Week 13, so he will have extra time to heal.

While he’s undoubtedly one of the best offensive players in the NFL, McCaffrey has struggled to stay on the field. He missed several games earlier this year due to a hamstring issue. McCaffrey seemed to blame the league for that issue.

Christian McCaffrey missed several games earlier this season with a hamstring injury, and the Carolina Panthers star was hurt once again in Sunday’s game against the Miami Dolphins.

McCaffrey was on the sideline for a crucial drive with the Panthers trailing late in the first half. While he had his helmet on and appeared ready to come in, there was speculation that he suffered an injury. The FOX broadcast said McCaffrey rolled his ankle earlier in the game.

While the Panthers did not announce an official injury for McCaffrey, it seemed obvious he was hurt. He’s typically the focal point of Carolina’s offense when healthy.

The Panthers may have been playing it safe with McCaffrey, but fans were frustrated to see the star running back watching from the sideline. McCaffrey had an unusual excuse for the hamstring injury that forced him to miss time earlier in the year. The ankle injury will now be the one to monitor.

The Carolina Panthers remain in hot pursuit of Deshaun Watson, and may be willing to go to substantial lengths to entice the Houston Texans to make a deal.

According to Jason La Canfora of CBS Sports, the Panthers have made acquiring Watson a priority ahead of Tuesday’s trade deadline. Carolina is so eager to acquire the quarterback that they have reportedly offered running back Christian McCaffrey and three high draft picks to the Texans. Houston continues to hold out for three first-round selections, however, and would prefer younger, less expensive pieces than McCaffrey.

It wasn’t long ago that McCaffrey was seen as one of the most valuable offensive pieces in the NFL, and he’s still only 25. After playing three games last year, combined with another IR stint in 2021, Carolina might be ready to cut bait. He’s also headed into the first year of a contract extension that will make him the highest-paid running back in the sport.

In his last healthy season, McCaffrey tallied a league-best 2,392 yards from scrimmage. If the Panthers are really offering him up for Watson, it demonstrates how serious they are about acquiring the quarterback. They might have to convince Watson to join them first, though.

The Carolina Panthers will be without running back Christian McCaffrey for at least three more weeks due to his lingering hamstring injury.

The Panthers announced Saturday that they have placed McCaffrey on injured reserve, meaning he will be sidelined for at least three weeks. The team’s medical staff felt this was the best way to ensure that McCaffrey would be fully healthy going forward.

This will definitely be frustrating for the Panthers, especially after the optimism they had been projecting the last two weeks. McCaffrey himself was optimistic about playing last week, but that didn’t happen. The signs only got worse this week, as McCaffrey had already been ruled out for Sunday’s game against Minnesota. It appears McCaffrey simply has not healed as quickly as anticipated.

By placing McCaffrey on injured reserve Saturday, it ensures this will count as one of his three weeks out. That means he will be eligible to return in Week 9.

Christian McCaffrey thinks he knows what was most responsible for his Week 3 hamstring injury.

McCaffrey said Thursday that he “definitely” thinks having to play a Thursday game was a factor in his injury, suggesting that the short week does not give players enough time to physically recover after playing on a Sunday.

“I don’t prefer Thursday night games, you know what I mean?” McCaffrey said, via Scott Fowler of the Charlotte Observer. “You go through a lot in a football game and you really get two days to recover, and then one of those days is a travel day … It’s tough. But it is what it is. It’s part of the game — but obviously frustrating.

“If you’re going to ask me, I would definitely say — and I think I’m not alone in this — I would probably argue against them…. It is frustrating sometimes when you feel like something could be avoided with a little more rest…. That’s just me and my personal views.”

McCaffrey is absolutely not alone in his opinion. Those who agree with him cite the same reasoning — the lack of preparation and recovery time, plus the travel day that puts road teams at a significant disadvantage. Christian McCaffrey offered a positive update on his status ahead of Week 5.

McCaffrey suffered a hamstring injury in the Carolina Panthers’ Week 3 win over the Houston Texans (watch here). At the time, the estimation was that he would miss a few weeks.

It looks like he is ready for a return.

McCaffrey said Thursday that he feels great and “definitely” has a chance to play on Sunday.

Christian McCaffrey says he feels great and he "definitely" has a chance to play Sunday.

Carolina is 3-1 this season and hosts the Philadelphia Eagles on Sunday. Chuba Hubbard and Royce Freeman saw expanded roles with McCaffrey out. But if Christian is back, that will be a big boost to Carolina’s offense. McCaffrey has rushed for 201 yards and a touchdown this season. Christian McCaffrey left Thursday night’s game against the Houston Texans with a hamstring injury, and we now have a better idea of how long the Carolina Panthers star might be out.

Ian Rapoport of NFL media reports that McCaffrey is expected to miss “a few weeks.” While McCaffrey will undergo more tests, there may be one positive sign for Panthers fans — he is not expected to go on injured reserve.

#Panthers star RB Christian McCaffrey is expected to miss a few weeks, sources say, as the team continues to run tests on his hamstring injury suffered last night. IR is not the plan as of now. Rookie Chuba Hubbard is the next man up.

You can see the play where McCaffrey injured his hamstring here.

If the Panthers do place McCaffrey on IR, he would be required to sit out at least three games. The fact that they have not committed to doing that is an indication that they believe he could return sooner.

Rookie Chuba Hubbard is expected to get the bulk of the carries and backfield work for the Panthers while McCaffrey is out. The former Oklahoma State star had 52 yards rushing on 11 attempts in Thursday’s win over the Texans. He added 27 receiving yards on three catches.