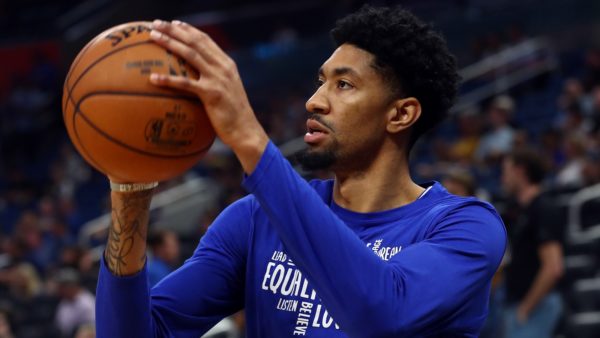 The Dallas Mavericks have something else to juggle besides their four losses in the last seven games.

Dallas fell on Sunday night to the Denver Nuggets in a 98-97 thriller. Mavs big man Christian Wood played a season-low 17 minutes in the defeat.

After the game, Wood expressed frustration about his playing time.

“I would love to play more,” said Wood, per Tim MacMahon of ESPN. “I’ve voiced that several times, but I just play my role.”

The 27-year-old Wood, who was acquired by Dallas in a trade over the offseason, has been making a strong case for minutes all season. He is putting up career-best shooting numbers (57.3 percent from the field and an elite 43.2 percent from three). But Wood is still seeing just 24.6 minutes per game this season (during which he has put up 16.6 points and 7.5 rebounds).

It was especially baffling that Wood got so little playing time against Denver, a team that famously plays big (though reigning MVP Nikola Jokic missed Sunday’s game due to being in health and safety protocols). The flip side of the argument goes that Mavs frontcourt players like Dorian Finney-Smith and Dwight Powell know head coach Jason Kidd’s system better at this point and are thus are the more trusted options for minutes down the stretch. But Wood is a quality talent in his own right (and also has a bit of an ego), so it is obvious that getting acquainted with the bench is not sitting right with him.

The Brooklyn Nets might not be able to get the Ben Simmons-sized boulder off their backs as easily as they had hoped.

Veteran NBA writer Marc Stein reported this week in a post to Substack that the Dallas Mavericks, despite recent rumors, do not have trade interest in the embattled Brooklyn Nets forward Simmons. Stein adds that this could be a case of the Mavericks being mentioned repeatedly to try to create an otherwise non-existent market for Simmons.

For context, Dallas had specifically been named in a report last week as a potential suitor for the three-time All-Star Simmons. Another prior report also indicated that an anonymous Western Conference team was engaging with the Nets on Simmons (though it is unknown if that alleged team was also the Mavs).

But there being no actual trade market for Simmons is probably closer to the reality here. The 26-year-old’s trade value is so far below rock bottom at this point that it is likely getting scorched by the earth’s molten core.

Simmons is owed a virtually prohibitive $177 million through 2025. Yet, he is averaging fewer points per game this NBA season (5.2) than, for example, a player like 34-year-old stone figure DeAndre Jordan, who is a reserve for the Denver Nuggets and is only making the veteran’s minimum (5.5 points per game). Other unflattering reports out there about Simmons are not helping his trade prospects any either.

Mavericks have 1 concern about Luka Doncic

May 28, 2021; Dallas, Texas, USA; Dallas Mavericks guard Luka Doncic (77) in action during game three between the Clippers and the Mavericks in the first round of the 2021 NBA Playoffs at American Airlines Center. Mandatory Credit: Jerome Miron-USA TODAY Sports

Though Luka Doncic may seem superhuman to the rest of us mortals, his team is not so convinced that Doncic can keep this up forever.

Dallas Mavericks head coach Jason Kidd told reporters on Wednesday that he has one big concern about Doncic, the Mavs’ star player. Kidd is worried about how often Doncic is getting knocked to the floor early in the season, per David Aldridge of The Athletic.

The former NBA point guard Kidd added that the effects of those falls might not manifest themselves immediately but that they can take a toll over the course of a career. “The wood always wins,” Kidd was quoted as saying.

The 23-year-old Doncic is the entire franchise right now for Dallas. He is having an MVP-caliber season with a massive 34.8 points (an NBA-high) to go along with 8.2 rebounds, 8.1 assists, and 2.0 steals per game. Doncic has also made an effort of driving to the cup more often this year, resulting in a career-best 11.2 free throw attempts per contest.

But with the increased aggression inevitably comes increased wear and tear on Doncic’s body. Kidd, who played in the league for 19 seasons, knows that reality all too well. If there is one silver lining though for Doncic and for fans of the Mavs, Doncic looks to have made a diligent effort this offseason to be able to absorb greater physical punishment.

While most other NBA teams would be holding their noses when it comes to Ben Simmons, one contending club may be seeing an opportunity.

Heavy.com’s Sean Deveney spoke this week with an unnamed Western Conference executive who said that the Dallas Mavericks are “a team to watch” in a potential trade for the Brooklyn Nets star Simmons.

This comes after another report last week said that an unspecified West team recently showed interest in Simmons, the former No. 1 overall pick.

The Luka Doncic-led Mavericks are 5-3 to start the new season. They have the floor spacing to survive a Simmons acquisition since they are equipped with a center (Christian Wood) who is shooting a smoking 48.0 percent on threes this season. But unless Simmons is willing to come off the bench for Dallas, he would inevitably displace one of Dorian Finney-Smith (a strong defender and adequate three-point shooter), Reggie Bullock (a strong three-point shooter and adequate defender), or Spencer Dinwiddie (another shot creator and ball-handler alongside Doncic) in the starting lineup.

The list of negatives with Simmons is lengthy. Other than his three-point inabilities, Simmons is averaging a triple-single this season (6-6-7), has a history of back and attitude problems, and has spawned some concerning theories from NBA scouts. He is also only in the third season of a five-year, $177 million millstone of a contract. But if Dallas is intrigued by Simmons’ defensive upside and wants to send out a bad contract or two of their own to match (like Davis Bertans or Tim Hardaway Jr.), perhaps an unlikely deal could be reached here. You can fire Frank Vogel, but you certainly cannot get rid of him.

The former Los Angeles Lakers coach Vogel was seen at practice for the Dallas Mavericks as they began training camp this week. Take a look.

Good to see Tyson Chandler back, having a chat with Frank Vogel. pic.twitter.com/51ExdS5d0S

For Vogel, who was terminated by the Lakers in April after three seasons in charge, it is fitting that he is around the Mavericks. Dallas head coach Jason Kidd was on Vogel’s staff in L.A. when they won the NBA title in 2020. Mavs assistant Jared Dudley was also a player on that Vogel-led Lakers team.

It remains to be seen if Vogel will be coaching in any official capacity this season. But we know that there is actually another NBA team that is interested in hiring him. "Sources tell me that both the Suns and Crowder are now working toward finding him a trade out of Phoenix…Look for teams like Boston, Memphis, Dallas, Miami."

Crowder, who will be in the final season of his contract at 32 years old, was recently granted permission by the Suns to skip training camp as they work on trading him. He has already played for all four of the teams mentioned by Charania — Crowder began his career in Dallas from 2012 to 2014, moved to Boston for a stint there from 2014 to 2017, played for Memphis from 2019 to 2020, and also spent time with the Heat in 2020 before going to Phoenix.

Additionally, all the aforementioned teams were among the final eight left standing in the playoffs last year. Crowder remains a championship-caliber glue guy who would bring value to any contender, which would explain the link to those clubs. Crowder may also have a particular one of those teams that he would prefer to go to above any.

The top offseason acquisition for the Dallas Mavericks is wasting no time getting ready for his close-up.

New Mavs center Christian Wood took to Twitter this week with a confident prediction for next season. Wood shared the story of how Derrick Rose, his former teammate on the Detroit Pistons, said that Wood would be an All-Star within three years.

“When I was with @drose in Detroit he came up to me and told me ima be an all star in 3 years,” tweeted Wood. “it’s the 3rd year since then [eyeballs emoji] ima prove him right . #motivation”

Wood, a talented player who averaged 17.9 points and 10.1 rebounds for the Houston Rockets last season, was acquired by Dallas in a big summer trade. The 26-year-old also has extra incentive next season as it will be a contract year for him (Wood can become an unrestricted free agent next summer).

Though Wood may have a hard time getting his shine while playing in Luka Doncic’s shadow (with high-usage scorer Tim Hardaway Jr. also expected to return from injury for Dallas), we know by know to never bet against Wood. Dennis Schroder could be launching a comeback tour in the state of Texas.

In his latest post to Substack, veteran NBA reporter Marc Stein indicated that the Dallas Mavericks could potentially take a look at signing Schroder. Stein writes that the Mavericks, who have one final roster spot open, have considered adding one more ball-handling veteran before the season starts.

The 28-year-old Schroder remains unsigned after averaging 13.5 points and 4.6 assists per contest between the Boston Celtics and the Houston Rockets last season. His stock has gone up in recent days after helping lead his native Germany to a perfect 3-0 start at EuroBasket 2022 (where Mavs executives Nico Harrison and Michael Finley have been in attendance).

After their Western Conference Finals berth last playoffs, Dallas lacks punch at the guard position thanks to the loss of Jalen Brunson in free agency. On top of that, there was another German player like Schroder who once did somewhat well for the Mavericks.

Collin Sexton’s NBA future remains unclear, but the Cleveland Cavaliers have at least looked into solutions for the guard.

On Cleveland.com’s Aug. 19 episode of the “Wine and Gold Talk” podcast, Chris Fedor revealed that the Cavaliers have had discussions with the Dallas Mavericks about a sign-and-trade involving Sexton. However, the discussions did not go far, as the Mavericks could not offer anything of interest to Cleveland.

The Mavericks do make sense as a destination for Sexton, as they would be looking to replace some of the production they will lose by Jalen Brunson’s departure. However, they clearly do not value Sexton highly enough to give up a piece that the Cavaliers would find appealing.

Sexton, a restricted free agent, has averaged 20 points per game in parts of four NBA seasons. The 23-year-old appears to have fallen out of favor with Cleveland, and the two sides are not close in terms of their valuation of the guard. 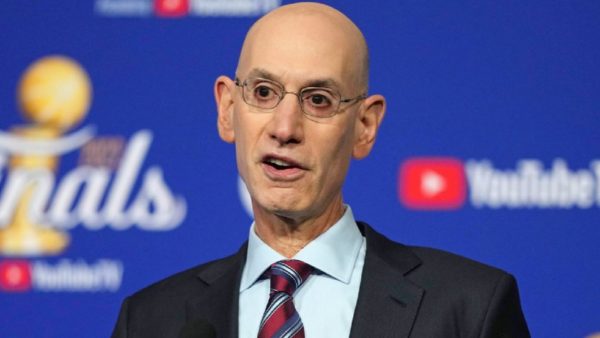 Adam Silver may have a trick up his sleeve for Christmas Day this year.

Veteran NBA writer Marc Stein reported on Friday that the first draft of next season’s NBA schedule has the Los Angeles Lakers playing the Mavericks in Dallas on Christmas. Stein says changes are still possible before the official schedule release next week but adds that Christmas games usually hold.

Still, the clash of generations posed by LeBron James and Luka Doncic is box office enough on its own. Several Mavs figures, including head coach Jason Kidd, assistant Jared Dudley, swingman Reggie Bullock, and newly-signed center JaVale McGee, also used to be with the Lakers organization. Independent of this matchup though, there is another showdown that we badly want to see on Christmas Day.