The Atlanta Hawks appear intent on potentially rebuilding quite quickly for the 2020-21 season.

According to Marc Stein of the New York Times, rival teams increasingly feel the Hawks will be in “pole position” to sign both Rajon Rondo and Danilo Gallinari as free agents. A previous report said the Hawks were prepping a “significant offer” for Rondo.

While neither player is a star, both would help the Hawks improve. The 34-year-old Rondo averaged 7.1 points, 3.0 rebounds and 5.0 assists per game for the Lakers last season. Gallinari, meanwhile, started 62 games for Oklahoma City, averaging 18.7 points and 5.2 rebounds per game.

The Hawks went 20-47 last year, and may struggle to nab guys like this if other contenders get in the mix as expected. However, the Hawks are clearly serious about adding some big names to work with Trae Young, and also have the No. 6 pick in Wednesday’s draft to work with.

Jusuf Nurkic may be trying to lure one of his old teammates to Portland.

Oklahoma City Thunder forward Danilo Gallinari teased his NBA future in a tweet on Tuesday. Gallinari, a free agent this offseason, tweeted a graphic of himself with the caption, “Where to next?”

Nurkic wasted little time in replying to the tweet, seemingly hinting at an attempt to recruit Gallinari to the Trail Blazers.

Nurkic and Gallinari used to be teammates on the Denver Nuggets for three seasons from 2014 to 2017. Portland is also facing uncertainty at the forward position with Carmelo Anthony also a free agent and Rodney Hood holding a player option for next season.

Gallinari, 32, is still a very productive offensive player. He posted 18.7 points on 40.5 percent from deep in under 30 minutes a game for the Thunder last season. But there may be a more appealing reunion out there for Gallinari.

Danilo Gallinari could return to Knicks this summer? Danilo Gallinari will be staying put with the Oklahoma City Thunder for the rest of the season, but now the buzz is around where he may go this summer.

Bleacher Report’s Michael Scotto reported Monday that the New York Knicks could be a potential free agent suitor for the veteran forward. CAA Sports’ Leon Rose is expected to take over as president of the Knicks, and he used to work closely with Gallinari’s agent Michael Tellem, also of CAA Sports.

Gallinari, who is having a stellar year with 19.2 points and 5.7 rebounds per game on 40.7 percent from deep, was originally drafted by the Knicks in 2008 and spent three years with them. His time with the team concluded when he was traded to Denver as part of the Carmelo Anthony blockbuster in 2011.

Though Gallinari will turn 32 this summer, he would be a nice replacement for the recently-traded Marcus Morris in New York. The Knicks are unlikely to be the only appealing suitor for Gallinari this summer however.

The Miami Heat are in advance discussions on a trade for Andre Iguodala, according to The Athletic’s Shams Charania. And while the addition of Iguodala should be a big help for Miami, that’s not the only addition they’re looking to make.

ESPN’s Adrian Wojnarowski reported on Wednesday that the Heat are also looking to trade for Danilo Gallinari.

Gallinari is in his first season with the Oklahoma City Thunder after being acquired in the Paul George trade. He’s averaged 19.2 points and 5.7 rebounds in 42 games for the Thunder.

The Heat have already traded away several of their first-round draft picks in deals for Jimmy Butler and Goran Dragic, so any deals from them would likely involve players.

The Boston Celtics seem to need some additional scoring help, and the Oklahoma City Thunder may have just the guy for them.

Bleacher Report’s Eric Pincus reported on Thursday that Thunder forward Danilo Gallinari is a player that the Celtics are monitoring. Pincus adds that Gallinari, who will be a free agent after the season, is also being pursued by the Toronto Raptors and the Phoenix Suns, among several other teams.

The 31-year-old Gallinari is a 6-foot-10 scorer who can shoot, handle, and defend. That makes him an ideal piece for Celtics head coach Brad Stevens and his positionless style of play.

Boston is a bit crowded at the forward spot with youngsters Jayson Tatum and Jaylen Brown here to stay and former All-Star Gordon Hayward still around. Gallinari has made clear that he prefers to play for a contender though, and he could be a better fit for the Celtics than a Hayward or a Semi Ojeleye. Still chasing his first NBA title heading into his age-31 season, Danilo Gallinari is prioritizing winning over money from here on out.

Speaking with Italian outlet Il Foglio this week, the veteran forward hinted at a willingness to take less money in order to sign with a contender when he becomes a free agent after next season.

“Next summer, when I will become free agent, I will privilege a team that can fight for the NBA Finals. I won’t chase money but the chance to play for the title,” said Gallinari, per Sportando. “NBA taught me to be a more selfish player on the court, but I have not really succeeded yet.”

Gallinari, who put up 19.8 points and 6.1 rebounds a game for the LA Clippers last season, was traded to the rebuilding Oklahoma City Thunder this summer, so he may have to endure some losing for the time being.

Plenty of contenders would love to have a versatile playmaker and three-point shooter in a 6-foot-10 body like Gallo, so he should have a good opportunity to emulate the career arc of this fellow European in a couple of seasons. Danilo Gallinari was sporting quite a shiner during the Los Angeles Clippers’ game against the Denver Nuggets on Sunday.

Gallinari got hurt during the team’s win at Memphis on Friday night when he took a shot to the face.

Gallinari took a shot to the side of the face — He's swelling up under his left eye like a boxer. Common foul called on Avery Bradley

Two days later, the effects of the shot to the face were visible.

Danilo Gallinari took a shot to the face on Friday night and had a nasty black eye against the Nuggets pic.twitter.com/pfO5IutE0B

Playing with a black eye didn’t seem to bother Gallinari, who mostly shot the ball well against Denver. Gallo is averaging 18.8 points and 6.0 rebounds per game this season.

In the midst of their fierce battle for a playoff spot in the Western Conference, the LA Clippers are redefining the meaning of the phrase “all hands on deck.”

In an interview with FOX Sports Prime Ticket’s Kristina Pink before the Clippers played the Phoenix Suns on Wednesday, forward Danilo Gallinari, who is currently recovering from a fracture in his right (shooting) hand, said that the team has asked him to play through the injury.

Danilo Gallinari: "The team asked me to play, so I'll play."

He doesn't seem thrilled, at least on the surface. pic.twitter.com/1cW7fg0Y8O

The 29-year-old Gallinari suffered the non-displaced fracture on Feb. 22 in a loss to the Golden State Warriors and has now missed 18 games since. He also dealt with a glute injury earlier in the season and, all in all, has been sidelined for all but 19 games so far in his first season as a Clipper.

The 41-34 Clippers need all the help that they can get in the heat of a furious playoff race in the West — they are currently the No. 9 seed but trail the Utah Jazz by just one game for the eighth and final playoff spot. Still, asking Gallinari to play at less than 100 percent is risky, especially since this is the second injury to the same hand that he has suffered in a span of less than seven months (albeit in much less bizarre fashion this time around).

Danilo Gallinari has partial tear in glute, will be out longer than expected 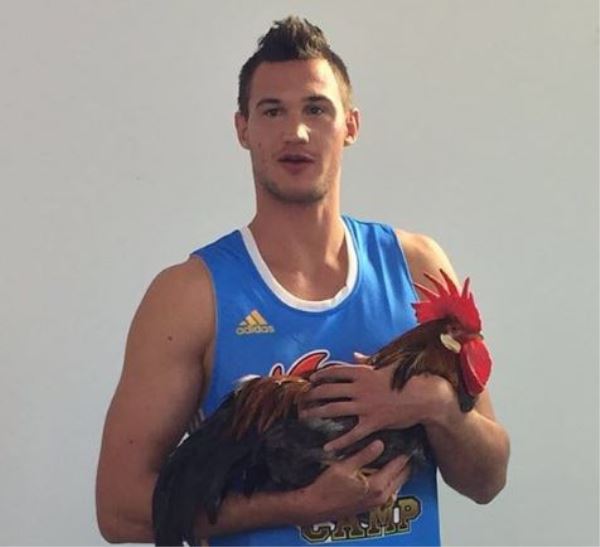 Danilo Gallinari will be out longer than expected, the Los Angeles Clippers announced on Wednesday.

The Clippers shared an injury update on Gallinari and said that the forward has a partially torn glute muscle. They said he will be re-evaluated in January.

Clippers’ injury update on Danilo Gallinari. Out until at least January: pic.twitter.com/95IIw4VCca

Gallinari was a big acquisition by the Clippers, who took a chance on him over the offseason despite his injury history. So far, he continues to be plagued by injuries. He missed 13 games due to an injury to his glute before returning to play two games earlier this month. But then he injured his other glute and has now missed six games in a row.

Gallinari has played in just 11 games this season. Danilo Gallinari will miss the remainder of the Eurobasket tournament after he injured his hand over the weekend, and the Los Angeles Clippers forward has since apologized for the way the injury occurred.

Gallinari, who was playing for the Italian national team, hurt his right thumb when he punched an opposing player on Sunday. The 28-year-old spoke with La Gazzetta dello Sport and expressed regret over the incident, though he did note that the Netherlands was playing dirty.

“I am very sorry for so many reasons. First because I am not part anymore of the Italian NT team and for the way I left it,” Gallinari said, as translated by Sportando. “Italian NT is like a second family to me and I feel really bad. I reacted after being elbowed. My reaction must be condemned but I got an elbow and we’ll never know if it was on purpose or not. The problem is that the elbows were flying high for a while during the game and when we were shooting they put their feet under us with the risk of getting hurt.

“In a short way, they were not playing clean. The game looked more as a fight. With this, I am not seeking an alibi, my reaction is inexcusable. I apologize to my teammates, to the whole National Team and also to (Jito) Kok. I lost my control, never happened before and never have to happen again.”

Adrian Wojnarowski of ESPN reports that Gallinari will get an official diagnosis from Clippers team doctors this week but is not expected to need surgery.

Here’s a video of the play where Gallinari hit Dutch forward Jito Kok in the face:

Danilo Gallinari has yet to play with Blake Griffin but just went full Blake in an exhibition game. Clipps Clippin' pic.twitter.com/wjLn1fK931

We have seen athletes injure themselves doing some incredibly stupid things, but this type of injury has to be particularly frustrating for the Clippers.