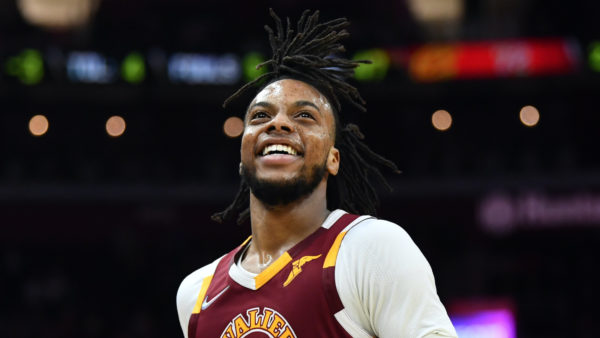 Darius Garland is not lacking for confidence.

The Cleveland Cavaliers guard joined the “Varsity House Podcast” for an interview that was posted on Wednesday. Garland was talking about his team and shared that he thinks they are trending in the right direction. He thinks they can even reach the conference finals next season.

“I think we can get even better,” Garland said. “I think we can make it to the Eastern Conference Finals next year for sure. We’re coming back with a chip on our shoulder. … We’re a young team. Like you said, we battled through a lot of adversity this season. So, it was cool just being there, but we not satisfied. We all in. We all ready to rock and roll.”

The Cavs were one of the surprises last season. They went 44-38 and finished eighth in the Eastern Conference. They lost both pf their play-in games and did not officially reach the playoffs, but they were in contention to earn one of the final spots.

Can they make such a surge that they become one of the top teams in the conference? That’s a tall order. Miami, Boston, Philly and Milwaukee were the top four teams in the conference last season, and they’re all not going anywhere. The Cavs have their work cut out for them to crack that nut. It won’t be easy taking that step up, but don’t tell that to Garland, who is not in the least bit discouraged.

The Cleveland Cavaliers just gave out the largest contract in team history, and it went to a surprising player.

According to Wojnarowski, Garland’s contract could be worth up to $231 million.

Cleveland Cavaliers All-Star guard Darius Garland has agreed on a five-year, $193M maximum designated rookie contract extension that could be worth as much as $231M, @KlutchSports CEO Rich Paul tells ESPN. It is the largest deal in franchise history.

The Cavs have had LeBron James on their team, as well as All-Stars like Kyrie Irving and Kevin Love. But it’s Garland who gets the team’s biggest contract ever, which is a sign of the incredible financial progress the NBA has made in recent years.

The contract is by far the largest deal among players on the Cavs’ active roster. According to Spotrac, Kevin Love’s four-year, $120 million contract is the second-largest. In comparison, the biggest deal that James ever signed with Cleveland was a three-year $100 million deal after he led the Cavaliers to their first NBA title in 2016.

Garland has been a key presence on a Cleveland team that has made marked improvements since the 22-year-old was drafted fifth overall in the 2019 NBA Draft. Garland averaged 12.3 points and 3.9 assists during his rookie season, and 17.4 points and 6.1 assists during the 2020-2021 season. Last season, the Vanderbilt product made his first All-Star team. The Cavaliers had a 44-38 record while Garland averaged a career-high 21.7 points and 8.6 assists per game. The Cavaliers earned a spot in a play-in game, but failed to make the playoffs after losses to the Brooklyn Nets and Atlanta Hawks.

With Garland locked in for the foreseeable future and a solid core of young talent around him, the Cavaliers look to be in a good position to build on last season’s success. The Cleveland Cavaliers are off to a 3-0 start and have given fans reason to believe they have a bright future. That can be attributed in large part to the development of young guards Collin Sexton and Darius Garland. The backcourt duo has been so good early on that veteran teammate Larry Nance Jr. has assigned them a nickname.

The official Twitter account of the Cavs shared a photo of Sexton and Garland on Monday and asked if anyone has a good nickname for the pair. Nance was one of the first people to weigh in, and the Cavs had a funny response.

you said it, not us https://t.co/Vgamd1gPwn

We tend to doubt the Cavs will endorse that nickname, but fans might.

Through three games, Sexton has averaged 27.0 points and 3.7 assists per game. Garland is averaging 19.0 points and 8.3 assists. The two young guards look like they could become one of the best backcourt pairings in the NBA. If they continue playing the way they have, “Sexland” probably won’t be the only nickname thrown their way. The New York Knicks have the third overall pick in what is considered a three-player draft, so there should not be anything shocking about their selection. Zion Williamson is obviously going to the New Orleans Pelicans at No. 1, which leaves the Knicks to take either Ja Morant or RJ Barrett at their spot.

ESPN’s Jonathan Givony reports that the Knicks are giving “serious consideration” to drafting former Vanderbilt point guard Darius Garland third overall. Garland has been recovering from knee surgery he had in November, and he has apparently looked impressive in workouts.

Darius Garland will conduct a last-minute workout in Tarrytown with the New York Knicks tomorrow, a source told ESPN. Garland is in serious consideration for the No. 3 pick. Minnesota, Boston, Chicago are teams looking at potentially trading up to No. 4 with Garland in mind.

Source: Garland is back at 100% after his knee surgery in November and will be ready to play summer league, pending approval from the team that drafts him. Garland has had a number of impressive private workouts recently with the LA Lakers, Cleveland Cavaliers and Chicago Bulls.

Garland, who averaged 16.2 points, 3.8 rebounds and 2.6 assists per game prior to suffering a meniscus injury, recently declared himself the best guard in the draft. That is a bold statement considering Morant averaged 24.5 points, 10.0 assists and 1.8 steals per game in his sophomore season at Murray State last year, but perhaps the Knicks are buying it.

One of Garland’s other workouts this week was heavily attended by a team picking in the top five, so he is generating plenty of buzz. Still, it would be a surprise if the Knicks took him at No. 3.