LeBron James and Dwyane Wade are bothered by the news of David Fizdale’s firing by the Memphis Grizzlies.

Shortly after news broke that Fizdale was being fired and replaced by assistant J.B. Bickerstaff, James sent the following tweet:

I need some answers. Feels like my man was a fall guy

Fizdale was an assistant on Erik Spoelstra’s staff in Miami prior to taking the Memphis job, which is why both James and Wade are coming to his defense.

Memphis started off the season 7-4, but they have lost eight in a row and are now 7-12. They also have some issues with their star player, as Marc Gasol was benched for the fourth quarter on Sunday. Clearly ownership or management felt there was a need for change.

Fizdale, a widely respected coach around the league, was in just his second season on the job. He went 43-39 in his first season, taking the team to the playoffs.

Of course, Memphis has a reputation for firing coaches who have had success; they have fired three coaches over the past five years, with Lionel Hollins and Dave Joerger also getting the ax despite coming off winning seasons.

The Memphis Grizzlies have fired head coach David Fizdale, according to a report.

ESPN’s Adrian Wojnarowski reported Monday that Fizdale was out in Memphis, with assistant J.B. Bickerstaff poised to take over on an interim basis.

This is definitely abrupt, though the team was at 7-12 and there was some public criticism of the way things were going from star center Marc Gasol, who was benched in the fourth quarter of the team’s eighth consecutive loss on Sunday. This is still a big surprise, though, given Fizdale took Memphis to the playoffs last year in his first year as head coach and was quite popular doing it. Clearly, the front office is siding with Gasol here.

David Fizdale has coached LeBron James as a Miami Heat assistant and against him as Memphis Grizzlies coach, so he knows a thing or two about his skillset.

Serving as a guest analyst for ESPN’s NBA playoff coverage, Fizdale had a great response when asked how he’d tell a player to defend James.

"When you're trying to tell players how to defend LeBron James what do you say?" pic.twitter.com/N9GDU5flVA

“Compete your butt off and I hope you’re a religious man, because you’re gonna need to say some prayers,” Fizdale said.

James is averaging 34.3 points, 9 rebounds, and 7.3 assists per game this postseason, and he’s not off the floor much to give opponents a breather, either. Fizdale’s advice is probably the best they’re going to get. The Memphis Grizzlies have coach David Fizdale’s back for having theirs.

The NBA made the unsurprising announcement on Wednesday that Fizdale had been fined $30,000 for his rant criticizing the officiating after a loss to the San Antonio Spurs in Game 2 of their best-of-seven series earlier this week.

Ronald Tillery of the Commercial Appeal reports that the Grizzlies players will collectively reimburse Fizdale for his fine and notes that Mike Conley sent Fizdale a “thank you” text following the rant (which you can see video of here).

re: Fizdale rant/fine: Mike Conley sent Fiz a 'Thank you' text Tuesday at 4 am, and said players will collectively reimburse Fiz.

Fizdale also received an offer from a local Memphis business to pay off his fine, so it looks like his rant succeeded in rallying the team and their fanbase together as they attempt to climb out of an 0-2 hole.

David Fizdale’s rant about referees was well-received by a whole lot of people, including one Memphis business.

Memphis-based ServiceMaster, which operates brands such as Terminix, offered on Tuesday to pay any fine Fizdale got for his now-famous “take that for data” rant after the Memphis Grizzlies’ Game 2 loss to San Antonio.

We proudly defend Memphis businesses – including the @MemGrizz. If Coach Fizdale gets fined, we've got it covered. #TakeThatForData

Fizdale did, indeed, get fined for his outburst, but nobody seems to mind. The team itself has embraced Fizdale’s comments, and there’s no doubt that many fans would be happy to join with ServiceMaster in paying off the coach’s fine. Besides, if it gets him a more even refereeing performance in Game 3, it’ll be worth it.

The Memphis Grizzlies took to Twitter on Tuesday to unveil a shirt inspired by the line Fizdale closed his impassioned rant with the night before following a Game 2 loss to the San Antonio Spurs in their first-round playoff series.

In the rant (which you can see video of here), Fizdale slammed the referees who worked the 96-82 loss for Memphis due to a 32-15 free throw attempt discrepancy in favor of the Spurs that saw Kawhi Leonard shoot more foul shots than the entire Grizzlies team.

The first-year head coach is virtually guaranteed to be fined for his comments. But given that they have already become a postseason rallying cry of sorts for his team and their fanbase, Fizdale’s fine may very well be worth it.

David Fizdale might as well start making the check out to pay for his fine.

The Memphis Grizzlies head coach went off on the officials after his team lost Game 2 of their Western Conference playoff series to the San Antonio Spurs, 96-82 on Monday night.

“It was a very poorly officiated basketball game. … Overall 35 times we shot the ball in the paint … we had 15 free throws for the game. They shot 18 times in the paint and had 32 free throws. Kawhi (Leonard) shot more free throws than our whole team. Explain it to me,” an angry Fizdale said.

“We don’t get the respect that these guys deserve … but I’m not going to let them treat us this way. That was unacceptable, that was unprofessional.”

Fizdale has a very good reason for being angry. His team only had 15 free throw attempts (making 13 of them). The Spurs got 32 foul shots and made 31. That’s a difference of 17 foul shots in a 14-point game.

The fine for criticizing the refs will be hefty for Fizdale but probably worthwhile as long as his team gets more calls in Game 3.

Russell Westbrook is having such a historic 2016-17 season that he’s forcing opposing teams to take their victories wherever they can get them.

Coach Fizdale: "I'd like to say that we held him from getting a triple-double. Take that Russell Westbrook." pic.twitter.com/VF6bzo3BGm

As absurd as that line would sound about any other player, it is indeed an accomplishment to prevent Westbrook from getting a triple-double these days. He is, of course, averaging one for the entire season, but Westbrook entered play on Wednesday having logged seven consecutive triple-doubles, and he just tied Oscar Robertson for most recorded in a single season with 41.

While the Grizzlies’ “feat” on Wednesday came down to a matter of just a single rebound, Fizdale, who has been in awe of the six-time All-Star guard seemingly since Day One, will definitely take it. 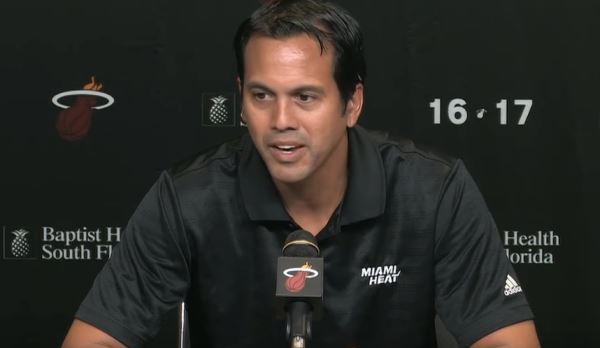 Head coaches are probably the most criminally underappreciated component of the NBA experience.

Fail to make the playoffs and half your fanbase will be calling for you to be burned at the stake — guilty until proven innocent in the kangaroo court of public opinion. Be lucky enough to sip the sweet broth of the postseason, lead your team to a deep run, heck, even successfully steer them into Championship Lane, and still your triumphs will be discredited as a categorical byproduct of the talent on your depth chart. Job security is also notoriously poor (consider that Milwaukee Bucks coach Jason Kidd, a 43-year-old at his second head coaching stop, is already the second-longest tenured head coach in his division), and head coaches’ values are too often reduced to some unholy amalgam of win-loss record, roster strength, effectiveness of late-game out-of-bounds plays, and overall ability to produce entertaining 140-character sound bites.

All of this is why the Coach of the Year Award is of the utmost importance. It’s one of the precious few times that we, as a basketball society, acknowledge excellence from the suits and ties who somehow manage to sculpt a collection of dozen-plus sweaty, muscular alpha males into a cohesive hardwood stud.

And here’s to power ranking the five who are most deserving of it this year.

Fizdale recently told his haters to kiss his asphalt, and the same goes for anybody who doubts the former Miami Heat assistant’s candidacy for COTY honors this year. Just when we thought that the burly Memphis Dinosaurs were never going to modernize, out popped a Fizdale-shaped genie from the bottle of available head coaches, and the Grizz haven’t looked back since.

Granted, Fizdale has still made it a point to uphold the undying zeitgeist of Grit ‘N Grind in the state of Tennessee. But dare we say he’s developed it into a more postmodern form of being? Suddenly, Marc Gasol is hoisting up 3.6 three-point attempts per game, Mike “Mad Money” Conley is zipping right past him with a borderline-reckless exemplar of the “shoot your shot” theorem at 5.9 attempts from deep a night, and Zach Randolph has morphed into the most intimidating sixth man in the history of Western society.

The tributes to the old regime remain detectable, whether it’s defensive mercenaries like Andrew Harrison and Deyonta Davis training under the tutelage of Papa Tony Allen or a net pace that still ranks amongst the slowest in the Association (28th this season to be exact, per ESPN). But for a first-year head coach like Fizdale who has been shafted by Chandler Parsons’ knees and the overall age of the roster, a 36-30 record and the seventh seed in the West is more than enough to at least merit consideration for top coaching honors.