Ex-Kansas City Royals GM Dayton Moore may not be off golfing for long.

Ken Rosenthal of The Athletic reported on Thursday that industry sources continue to link Moore to the Texas Rangers. Rosenthal notes that Moore has a prior relationship with Rangers GM Chris Young, the former MLB pitcher who finished his career playing with the Royals from 2015 to 2017.

Moore, still only 55, had served as Kansas City’s GM since 2006, leading them to two AL pennants and a World Series title in 2015. But the team’s fortunes soured in recent years (with just a .398 winning percentage over the last five seasons), and Moore was fired by the Royals in September.

The Rangers, who won only 68 games this season and have not been to the playoffs since 2016, are in a rough transitional period of their own. But they already landed an ex-World Series champion to be their next manager, and now they could be adding another one in Moore to their front office.

The Kansas City Royals have made a major change in their front office, parting ways with longtime team president Dayton Moore.

Moore confirmed that he had been let go, as first reported by Ken Rosenthal and Andy McCullough of The Athletic. Moore said he was “thankful” for the chance to run the Royals, but “disappointed” at not being able to see through the team’s current rebuild.

Moore took over the Royals in 2006, making him one of the longest-tenured executives in baseball. It took him nearly a decade to turn the franchise into a successful one, but the patience paid off as the Royals won consecutive AL pennants in 2014 and 2015. Kansas City narrowly fell short in seven games against the San Francisco Giants in the 2014 World Series, but beat the Mets in five games a year later to claim the championship.

Since then, the Royals have failed to reach those heights once more. Kansas City entered play Wednesday at 59-89, and though there is promise at the MLB level, the team has clearly not progressed as quickly as ownership hoped or expected. The organizational culture had seemed to take a hit as well.

Moore is still just 55, so he has a decent chance of landing another executive job elsewhere if that is what he wants. Ten Kansas City Royals did not make the trip to Canada for a 4-game series against the Toronto Blue Jays due to their COVID vaccine status. The worst part for team president Dayton Moore, however, is what one of the players had to say about the decision.

Royals infielder Whit Merrifield was among the players whose vaccination status prevented him from traveling to Toronto. The utility man on Wednesday defended his decision, but made a revelation that upset Kansas City.

Merrifield caused a bit of an uproar by saying he had no plans to get the vaccine, but that might change if he were traded to a contender that might face the Blue Jays in the playoffs.

Whit Merrifield said his decision to not get vaccinated is a personal choice based on research and conversations.

He has sat the last 4 games with a big toe bone bruise but said it's progressing well and he might have played by the end of the Toronto series if he was going. pic.twitter.com/jUGOpsR3wZ

“That’s the only reason I would think about getting it at this point, is to go to Canada,” Merrifield said. “That might change down the road. Something happens and I happen to get on a team that has a chance to go play in Canada in the postseason, maybe that changes.”

“I was disappointed. Truthfully I was disgusted.”

“I was disappointed. Truthfully I was disgusted,” Moore told Petro.

Moore may have been commenting on what Merrifield said in general, but the remark about possibly taking the vaccine if traded would infuriate anyone. Merrifield is one of the longest-tenured Royals and a team leader. For him to say there are certain playoff-related circumstances where he might get the vaccine indicates he does not feel the Royals are worth that compromise. He’s saying the games he’s playing in right now don’t have as much value to him.

No, the 35-53 Royals are not going to be a playoff team, but Merrifield’s willingness to put it in the terms he did sends a bad message.

Merrifield’s comments might make it less likely for him to be traded to a contender. That could be the case for one of his teammates as well.

Kansas City Royals general manager Dayton Moore is receiving some positive attention for his comments about why his organization will continue to pay minor leaguers even though there are currently no minor league seasons, and even though some other teams are releasing players to cut costs.

Moore explained that they will continue to pay their minor leaguers through the end of the season because they believe it is important for the overall good of the sport of baseball.

In a conference call with local media members today, Royals GM Dayton Moore said this about the club's decision to stand by their minor league players: pic.twitter.com/8ZfWWx95Jh

“Understand this: The minor league players, the players you’ll never know about, the players that never get out of rookie ball or High-A, those players have as much impact on the growth of our game than 10-year or 15-year veteran players. They have as much opportunity to influence the growth of our game as those individuals who played for a long time because those individuals go back into their communities and teach the game, work in academics, are JUCO coaches, college coaches, scouts, coaches in pro baseball. They’re growing the game constantly because they’re so passionate about it. So we felt it was really, really important not to release one minor league player during this time, a time we needed to stand behind them,” Moore said.

That is just a great answer and reason. The Royals are also not furloughing or laying off any employees within the front office and instead have instituted tiered pay cuts at the upper levels.

We don’t have insight into the financial standing of organizations that did release players. Maybe they really just could not afford it. But you just have to figure that for what is such a minor cost in the big picture, the benefit of treating these players well was so much greater in the long run, for exactly the reason Moore explained. It’s a wonder that MLB as a whole did not figure this out, but they’re also in a labor dispute with their players during a pandemic, so we really can’t put anything past them when it comes to bad big-picture business decisions. 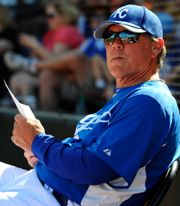 The brains behind the Kansas City Royals’ World Series winning team have been rewarded.

Manager Ned Yost and general manager Dayton Moore were both given extensions by the team on Thursday, per a team statement. Yost’s previous deal would have expired after 2016, but his extension will keep him on board through 2018. Terms of Moore’s deal were not disclosed.

Yost, interestingly enough, is the winningest manager in franchise history. Though he’s 468-469 overall in six seasons, he’s posted two winning seasons in a row, with a pair of World Series appearances and one win. Moore has been the team’s GM since 2006 and while his work took a while to yield results, there is no disputing that they have.

It wasn’t that long ago that both men didn’t look long for Kansas City, Yost in particular after a series of questionable tactical moves down the stretch in 2014 Times have changed significantly. The Kansas City Royals had a couple of hot streaks throughout the final month or so of the MLB season, but ultimately they came up five games short of a playoff berth with an 86-win season. However, the team did finish with its first winning record in 10 years. I guess you could view that as an improvement, as Royals general manager Dayton Moore certainly seems to.

Despite the fact that Kansas City continued its streak of more than 25 years without a postseason berth, Moore told reporters in his season-ending press conference that he felt like his team just won a championship.

“In a small way, I feel like we’ve won the World Series,” he said Tuesday, per Sam Mellinger of the Kansas City Star.

Moore immediately regretted the comment. He was obviously trying express how proud he was of the team for the improvements that were made, but he has been getting ripped for comparing an 86-win season to a World Series championship. He later tried to explain himself.

“What I’m saying, I mean, look, ‘World Series’ is the wrong term,” he said. “But I feel very, very good about where our organization is. It means a lot to me. You have to know how I’m wired. The only reason I’m a general manager is that this is my boyhood team. It’s a special place for me.…

Moore added that he expects the team to compete for an actual World Series going forward. He said the comment was more about how proud he is that the team has once again gotten fans to “engage” and love baseball. One thing Moore likely understands now is that a World Series is not a World Series unless it’s a World Series.