Desmond Bryant out for season with torn pectoral muscle The Cleveland Browns have been dealt a major blow before the start of training camp, as defensive end Desmond Bryant underwent surgery on Tuesday to repair a torn pectoral muscle and is expected to miss the entire 2016 season.

Bryant, 30, suffered the injury while lifting weights over the weekend, according to Mary Kay Cabot of Cleveland.com. The timetable for his recovery is five to six months, which will likely send Bryant to injured reserve.

Bryant was the Browns’ best pass-rusher last season, recording six sacks on a team that was already one of the worst in the league at getting after the quarterback with just 29 sacks total. Cleveland has also lost starting linebacker Armonty Bryant for the first four games of the season due to a failed drug test.

Just last month, Bryant spoke about taking on a larger leadership role with the Browns.

“This is the first time in my career that I am the elder statesman in the D-line room,” he said. “With that, I get a little more responsibility. On and off of the field, I just want to be more vocal with the guys, let them know what I am thinking more, which I haven’t really done as much in the past.”

And just like that, the player who brought us one of the most epic mug shots of all time is done for the year. The Browns can never seem to catch a break. Cleveland Browns defensive tackle Desmond Bryant is never going to hear the end of his Feb. 24 arrest, and deservedly so. Bryant, who police described as “extremely intoxicated” at the time, attempted to force his way into a stranger’s home in North Miami Beach after a night of partying in South Beach. He has already been charged with criminal mischief and given us one of the most epic mug shots in mug shot history, but it doesn’t end there.

According to The Miami Herald, Bryant is also being sued by the owners of the home that he tried to force his way into. Homeowner Isaac Bakar said his family was “terrified” when they were awakened at around 5:30 a.m. to a 311-pound man who was attempting to pull their door off its hinges. The family’s attorney says they have needed psychological counseling.

“They were scared,” attorney Robert Fiore said. “My client was holding on for dear life.”

Bakar allegedly tried to physically hold the door so that Bryant could not get into the home while his wife called the police. The 170-pound Bakar feared that his family was falling victim to a home-invasion robbery from a person who is almost twice his size. The official complaint that was filed can be seen here.

As it turns out, Bryant claims he was so intoxicated that he thought the home we was unable to get into was his own — despite the fact that he lives nowhere near the Bakar residence. Bryant recently signed a five-year, $34 million contract with the Browns, and it sounds like some of that fat new deal could be heading to the family he scared the living daylights out of. 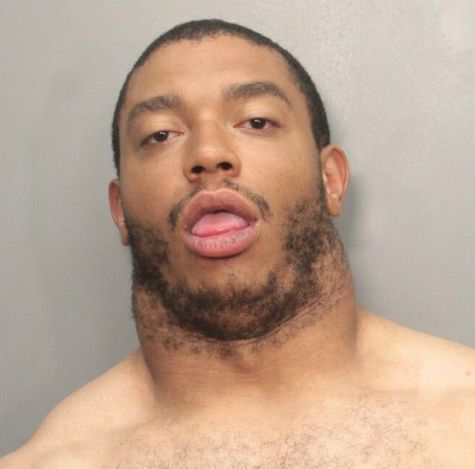 Let’s get one thing out of the way here: Any excuse we have to re-post this all-time awesome mug shot is going to be seized. This mug shot was taken by Oakland Raiders DT Desmond Bryant over the weekend, and it belongs in the Hall of Fame of mug shots. Heck, it’s so splendid, it should get its own bust in Canton before Michael Strahan.

As you know by now, Bryant was arrested Sunday on a misdemeanor charges of criminal mischief for allegedly drunkenly causing a disturbance at a neighbor’s house (did the neighbors not have ADT?). His incredible mugger has made its way around the Internet and reached the late night talk show circuit this week.

Host Jimmy Kimmel was so enthralled with the mug shot, he decided to turn it into a social media trend. Kimmel asked his “Jimmy Kimmel Live” viewers Wednesday to do their best Bryant impressions and send him the picture over Twitter using the hashtag “#dezzing.”

Below are several photos of people “dezzing,” beginning with Kimmel staffer Guillermo:

END_OF_DOCUMENT_TOKEN_TO_BE_REPLACED

Oakland Raiders defensive tackle Desmond Bryant was arrested on a misdemeanor charge of criminal mischief on Sunday, and as a result we have one of the most legendary mug shots of all time.

In case you care, Bryant allegedly went into a neighbor’s house drunk in Miami and caused a disturbance. The story is hardly as interesting as his mug shot, which there are really no words to describe.

Raiders enthusiast Victor Cotto shared the photo on Twitter on Monday afternoon and referred to the post as “McClain mugging,” which is a reference to the awesome smile linebacker Rolando McClain flashed during one of his many run-ins with the law several years ago. Personally, I’d put Bryant’s “derp” face in a class of it’s own.

Nobody should be happier than Colorado Rockies first baseman Todd Helton, who prior to Monday gave us easily the most entertaining mug shot in recent history. That honor now belongs to Bryant, who has cemented his place in the mug shot hall of fame.