San Francisco 49ers defensive coordinator Robert Saleh is expected to be one of the hottest names on the coaching market this offseason, and it’s shaping up that way so far.

49ers general manager John Lynch revealed Monday that the Detroit Lions, Jacksonville Jaguars, and Atlanta Falcons have all asked for permission to interview Saleh for their head coaching positions. That means at least three of the six teams with coaching vacancies want to talk to Saleh, with more to possibly come.

Saleh was a big-name coaching candidate last offseason after the 49ers reached the Super Bowl, largely on the strength of his defensive unit. This year he appears even more likely to land a job. He’s been linked to the Lions before, as he is a Michigan native who got his start in coaching at Michigan State.

The Jaguars’ request is an indication that they are running a full and comprehensive search, even though it sounds like there’s one huge name they may be targeting.

As expected, Eric Bieniemy is in high demand as an NFL head coach candidate.

The Kansas City Chiefs offensive coordinator has at least three interviews lined up for head coaching vacancies around the league. According to ESPN’s Adam Schefter, the Atlanta Falcons, Detroit Lions, and New York Jets have formally requested permission to speak to Bieniemy about their coaching positions.

It’s no surprise to see Bieniemy near the top of a lot of teams’ wishlists. That was the case last offseason as well, though he didn’t land a job then. Bieniemy, who has been in charge of the Kansas City offense since 2018, has received a lot of credit for the Chiefs’ exciting and innovative offense. It seems like he has an excellent chance of getting a job this time around.

It’s worth noting the absence of one team from this list that has a quarterback that appears very interested in working with Bieniemy. The Detroit Lions were taken apart on Saturday in the first half by the Tampa Bay Buccaneers, who put up 34 points. Detroit is 5-9, has a replacement coach filling in for their interim coach, and clearly has packed it in for the game.

Westwood One radio analyst Jim Miller noticed that and was extremely frustrated during the first half. According to ESPN’s Chris Mortensen, Miller compared the Lions’ defense to a sixth grade pick-up team.

The commentary is fitting. The Lions embarrassed themselves in the first half and that only continued in the second half.

If the team won’t even play for pride, then Miller is right to call them out for their shoddiness.

Here’s how bad the Lions’ first half was on Saturday

The Detroit Lions were definitely up against it facing the Tampa Bay Buccaneers on Saturday, but even under the circumstances, it was shocking to see how bad they were in the first half.

The Lions trailed at halftime 34-0 as they were consistently torn apart by Tom Brady and the Buccaneers’ offense. In total, it was the worst first half performance by any NFL team from a defensive standpoint in a decade.

The 410 yards of total offense are also the most in a single half in team history.

There are games where teams don’t get 410 yards of total offense, much less halves. Things were so lopsided that the Buccaneers simply sat Brady for the second half, bringing in Blaine Gabbert to see out the rest of the game while resting some regulars.

While few would have predicted it would get this bad, the Lions being flat isn’t exactly a shock. The major figures on their coaching staff are missing for this reason, and the team is looking ahead to 2021. That doesn’t excuse the performance, but there’s some context to how bad it is. 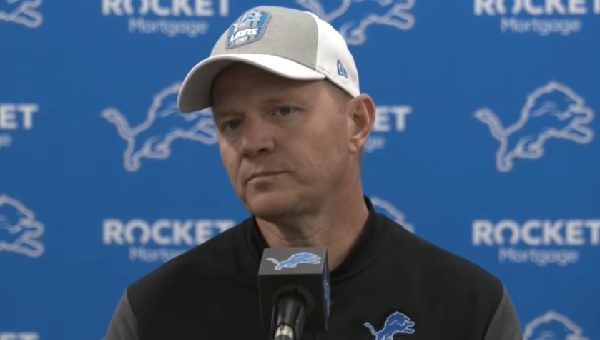 The Detroit Lions have had to make some major temporary changes to their coaching staff this week due to COVID-19 protocols, and they will now have their third different head coach of the season on the sideline for Saturday’s game against the Tampa Bay Buccaneers.

The Lions provided a full breakdown of all the coaching changes:

The Lions are 5-9 on the season and out of playoff contention. They will be looking for a new head coach this offseason after they fired Matt Patricia.