Cincinnati Reds first baseman Joey Votto was incredibly upset with himself after he struck out in his first at-bat against the Cleveland Indians on Monday. He let his emotions get the best of him and tossed out a few expletives, which were unfortunately picked up by the television microphones. This did not make manager Dusty Baker happy.

“I understand (his frustration),” Baker said after the game, via Cincinnati.com. “I have a son that idolizes him. Sometimes an open display of displeasure is not a good example, whether you come through or not later. Joey is the face of baseball.

“I’d like to see him temper it a little bit.”

Votto later came through with a huge two-run homer in the 8th inning that broke a 2-2 tie and resulted in a 4-2 victory for the Reds. Like a disappointed parent, Baker made sure to let his All-Star know that his outburst was unacceptable even on a day where he played the hero.

Baker also said on Monday that he wishes Johnny Cueto and Matt Garza could be locked in a room together to fight it out after Garza ripped Cueto for throwing over David DeJesus’ head on Sunday.

“Just put them in a room, let them box and let it be over with,” Baker said. “I always said this, let it be like hockey, let them fight, someone hits the ground and it’s over with. I’m serious about that.”

Baker’s comments about Garza and Cueto fighting may sound contradictory when compared to his remarks about Votto’s outburst, but he did say to lock them in a room. I doubt he minds Votto swearing in the clubhouse, he just doesn’t like when it ends up on TV for all to hear. 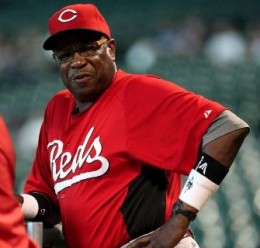 There are very few things that could happen over the course of a spring training game that would result in one manager refusing to shake another manager’s hand after the game ends, but Dusty Baker and Kirk Gibson apparently found a reason on Monday.

According to MLB.com’s Steve Gilbert, Baker and Gibson got off to a rocky start before Monday’s exhibition between the Cincinnati Reds and Arizona Diamondbacks. The two managers reportedly had a “testy discussion” at home plate while exchanging lineups, which apparently had to do with Baker wanting to use a DH and Gibson wanting to play by standard National League rules.

“I had it happen last year with a team, they tried to put the DH in there and that’s not the way it’s done,” Gibson explained. “I wanted to play a National League game. I notified them several times and they just wanted to do it their way and they couldn’t do it. So they didn’t like that. But we play by the rules here, that’s the way it is. We go over there we play by their rules. It’s very simple.”

Arizona was the home team, and the home team gets to decide if a DH is going to be used or not during spring training. According to Gilbert, Gibson wanted to play by standard NL rules so he could get pitcher Brandon McCarthy as many at bats as possible. McCarthy, who pitched in the American League last season, needs practice at the plate. Baker wanted to use Shin-Soo Choo as a DH instead of playing him in the field, since he is nursing a minor quadriceps injury. Gibson would not give in, thus upsetting Baker.

After the game, Gibson apparently extended his hand to shake Baker’s, but Baker refused.

“We didn’t have a very pleasant encounter at home plate,” Baker said. “That’s how it goes. It’s over.”

Now children, it’s only spring training. Let’s try to get along.

Dusty Baker: Derek Lowe was probably drinking at the ballpark and doesn’t remember what he did

If Dusty Baker and Derek Lowe didn’t hate each other prior to Wednesday, they do now. During the Indians 5-2 loss to the Reds, Lowe took exception to a Mat Latos fastball that was thrown close to him and he felt was intentional. He was right. Lowe ripped Baker on Wednesday night and Dusty was asked to respond to Lowe’s comments on Thursday morning. He fired back incredibly hard.

“He had some words for me,” Baker said according to Cincinnati.com’s Reds blog. “I really didn’t want to make a public thing or a public spectacle … No. 1, you’ve got to ask him why he hit Joey Votto in the back two years ago. Yesterday, he took exception to a ball inside that didn’t hit him, then hit Brandon Phillips after that.

“I’m not denying nothing. I didn’t order anyone to hit him. I told (Mat Latos) to buzz him and make him uncomfortable. That’s what happened. Nobody hit him. Then he hit our guy.”

So Baker says he told Latos to throw at Lowe, but not into him. As for the history between Baker and Lowe, the Reds manager really started coming at Lowe when he was asked if it bothers him that Lowe said he has no respect for him.

END_OF_DOCUMENT_TOKEN_TO_BE_REPLACED

Derek Lowe rips Dusty Baker after being thrown at: ‘I have zero respect for the guy’ According to Derek Lowe, Dusty Baker has been ordering pitchers to throw at him for the past five years. Due to various situations when he comes to bat, Baker has not had much success. During Wednesday’s 5-2 loss to the Reds, Lowe was brushed off the plate by a 96-mph fastball from Mat Latos at the start of the fifth inning. He instantly motioned toward the Reds manager and started to say something.

“Dusty will deny it,” Lowe explained after the game according to MLB.com’s Major League Bastain. “It has everything to do with him. They’ve been trying to do this (stuff) for years. I’d always come up with men on base. To say it didn’t come from Dusty, Mat Latos was with the San Diego Padres the last four years. He has no idea what’s going on. This goes back to my last year with the Dodgers. He made up some (bogus) story. A lot of people got involved. People almost got fired over it. There were a lot of people involved. I mean, by no means am I going to sit here and get into it.”

END_OF_DOCUMENT_TOKEN_TO_BE_REPLACED

On July 2nd, 30,000 lucky fans who attend the Reds-Indians game will receive this Dusty Baker bobblehead. Not only is it a bobblehead, but it also doubles as a toothpick holder. I thought the Angels’ giveaways were the best, but this Baker toothpick holder beats em all. Does it get any better than that?

Forearm bash to Darren Rovell for the picture

In case you missed it Thursday, Reds rookie Johnny Cueto was rather impressive making his major league debut. The 22-year-old was perfect through his first five innings before giving up a solo HR to Justin Upton in the 6th, the only base-runner he allowed all game. Cueto went seven innings of one-run, one-hit ball, striking out 10 for the win. Needless to say, Johnny Cueto was nothing short of dominant. One problem, however. Given the fact that Cincinnati now has a new manager with a track record of abusing young arms, it didn’t take long for my man Pat Lackey to develop Cueto’s timeline to Tommy John. Check it out:

I’m not sure what was more impressive: Cueto’s debut, or Lackey’s timeline. Sad thing is, I think we’re looking at a realistic situation. These days it’s a surprise if a pitcher makes it through the first three-four years of his career without needing TJ surgery. What happened to the old days when they used to let pitcher’s throw with arms swollen like basketballs? Guess Dusty longs for those days.

Word came out over the weekend that the Reds had hired Dusty Baker as their new manager. Apparently the news was not well-received by fans in Cincinnati. Tom Fornelli over at MLB FanHouse quotes someone from the Dayton Daily News who’s suggesting the negative fan reaction is the result of Baker’s race.

Well, Cincinnati Reds fans wanted a big-name manager and now they have one.

Turns out, plenty of them seem to have wanted a big-name WHITE manager.

Saturday night the Reds signed Dusty Baker to a three-year deal – making him the first black manager in the history of baseball’s oldest franchise – and by Sunday morning the move was being met with some very nasty venom on internet web sites and call-ins to talk radio shows.

I’m guessing there are some fans out there who might be opposed to having a black manager (in addition to having a black head coach in Marvin Lewis), but I’m really thinking that most people are upset because they know Dusty Baker is a poor manager. Really, to know all you need to about Dusty, just look at the biggest game he ever managed — Game 7 of the 2002 World Series. Facing a predominantly left-handed hitting Angels lineup, Baker elected to start Livan Hernandez over southpaw Kirk Rueter, who threw six innings in a Game 4 win, and shut the Angels down coming out of the pen in Game 7 (after the damage had already been done). Oh yeah, let’s not forget that Baker elected to pinch hit Japanese slugger Shinjo over Dunston when the Giants were threatening with two men on in the 9th. Shinjo did what he does best — struck out to put the Angels one out away from the World Series win.

Baker is just a bad decision maker, and that’s why I’d be upset if he were hired to manage my team, and that’s why I’m guessing Reds fans are upset. That, and they were probably hoping for Tony LaRussa. But sure, blame it on race, that’s always good as an attention-grabber.