The New York Mets brought in closer Edwin Diaz last offseason believing that he would be a lockdown closer for the team, but that simply hasn’t happened before.

Philadelphia Phillies shortstop Jean Segura played with Diaz for two seasons with the Seattle Mariners, and it was his three-run home run that walked off Diaz and the Mets on Thursday. After that game, Segura openly wondered if the environment of New York offered too many distractions for Diaz.

Segura knows Diaz, so it’s worth wondering if he thinks Diaz would be particularly susceptible to an environment like New York. His peripheral numbers aren’t bad, but he’s giving up a lot more hits and home runs than last season.

Diaz’s struggles are a subplot in what has quickly devolved into a very chaotic Mets season. The door is open to debate why a once-dominant closer is having such huge issues now.

Mets manager, closer do not appear to be on same page

One tweet sent by a New York Mets reporter on Thursday highlighted the disconnect within the team.

Newsday Mets reporter Tim Healey tweeted prior to the team’s series finale against the Los Angeles Dodgers about closer Edwin Diaz’s availability for the game. Diaz said he would not be available to pitch, while manager Mickey Callaway said the closer might be available.

Mickey Callaway said Edwin Diaz might be available tonight, despite pitching the past two games and four of the past game.

Diaz said he is not available tonight.

If a reliever does not feel like he can pitch in that night’s game, that’s something a manager should know. Granted, knowing the status of all 25 players on your roster prior to a game isn’t the easiest thing and requires proactive communication, but this is something you figure a manager would know in advance of game time.

Diaz had a rough outing and blew a 3-run lead, taking the loss on Wednesday. He was among the Mets players who found the Dodgers’ success to be suspicious.

Callaway has been on the hot seat, though the Mets rebounded from a 3-game sweep at Miami to sweep the Nats in a 4-game series. That probably helped save his job. The Mets entered Thursday’s game 27-28. 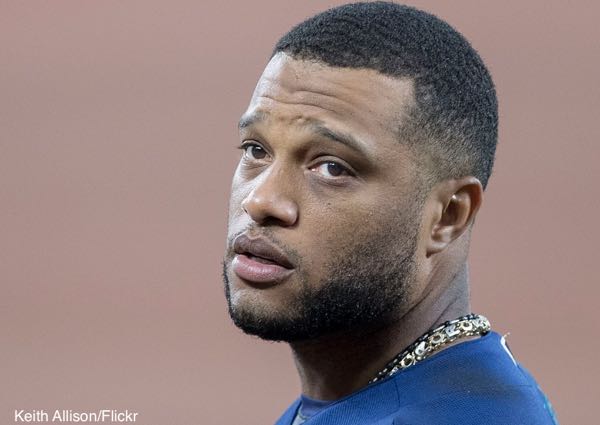 The New York Mets and Seattle Mariners are closing in on a trade that will send All-Star Edwin Diaz and Robinson Cano to the Mets for two players and several prospects. The deal has not been consummated, but is said to be close to being official.

According to SNY’s Andy Martino, Cano and Diaz would be traded for Jay Bruce and Anthony Swarzak. Martino mentions three other players and says a combination of 2-3 of them could go in the deal.

Can report this more definitively: As of now, the not-yet- official Mets Mariners trade on the table is Cano/Diaz for Bruce/Swarzak/Kelenic/McNeil/Dunn

Medicals have not been reviewed. Remember Wilmers’ tears.

Cano is owed $120 million over the next five years, so the Mariners were aiming to dump his contract. They’ll end up attaching one of their prized possessions — Diaz — to unload Cano. Diaz led the league with 57 saves last season and had 124 strikeouts in 73.1 innings. He is under team control for four more seasons and won’t enter arbitration until 2020.

Bruce is owed $26 million over the next two seasons, which will offset a small portion of what Cano is owed. Swarzak is owed $8 million next season. The Mariners could also be paying a portion of the money Cano is owed.

Jarred Kelenic was the Mets’ first-round pick this year. The high school outfielder batted .286 with an .839 OPS in rookie ball.

Jeff McNeil, 26, batted .329 in his MLB this season. The infielder had an .852 OPS. He mostly played second base but can also play third.

Look: Mariners manager gets fresh haircut to pay off bet Seattle Mariners manager Scott Servais got a fresh new haircut on Tuesday to make good on a lost bet.

Servais told MLB Network Radio on SiriusXM last week that the bet came about when he ridiculed closer Edwin Diaz in April over the reliever’s haircut.

“Early in the season, Eddie Diaz came in with a haircut one day. I was joking around with him in the lunch room and just giving him a hard time. This is early April — this is the first week of April — I make a comment to him, ‘you get 50 saves, and I’ll get my hair cut like that,'” Servais told MLB Network Radio.

It's happening, folks.#Mariners manager Scott Servais says he plans to honor the promise he made in April to cut his hair like Edwin Diaz following save #50.@EdiDiaz44 #TrueToTheBlue #SugarDo pic.twitter.com/iE6OyRigbh

Fast forward to Saturday, and Diaz, who is enjoying a historic season, saved his 50th game. So guess what happened on Tuesday afternoon? Servais sat down in the chair to get a Diaz-like cut:

Narrator: It was at this moment that @Mariners skipper Scott Servais knew he made a mistake.

Servais is only too happy to get the cut given the circumstances.

“Everyone wants their closer to end up with 50 saves. Lo and behold, we’ve played a ton of 1-run games. Eddie has been outstanding for us all year. He’s really been the key to our ballclub. You get in those tight games, you know you can turn the ball over to him. Everybody feels good about our chances of taking a ‘W’ home. It’s been fun.”

Credit Servais for having fun with it. And why wouldn’t he? The haircut is a sign of the team’s success this season.

The races for the Cy Young Award in both leagues certainly look likely to provide intrigue as we head toward the end of the season. There’s a good argument to be made that each league features a clear favorite right now, but there’s competition behind them very much within striking distance. A few good or bad starts could change things quite a bit.

Here are the current top five candidates for Cy Young in each league.

A month ago, Severino might have been the favorite here, but things have gotten rough for him in August and may have cost him any shot at the award. His numbers are still fine, but his ERA has risen to 3.28 after sitting at 1.98 following his defeat of the Red Sox on July 1. Severino has still been the best pitcher on an often battered Yankee staff, and that could score him some points in voting despite his midseason swoon. His 16 wins in a big market will also help his case.